Dollard is some kind of wingnut — one of the deranged types who wants to KILL ALL THE MUSLIMS. He recently posted something rather appallingly ignorant: SCIENCE: Centuries Of Inbreeding Have Caused Catastrophic And Irreparable Damage To Muslim Gene Pool.

I was kind of annoyed that he’s appropriating science (or rather, SCIENCE) for his bigoted nonsense, but the content was even worse.

Massive inbreeding within the Muslim culture during the last 1.400 years may have done catastrophic damage to their gene pool. The consequences of intermarriage between first cousins often have serious impact on the offspring’s intelligence, sanity, health and on their surroundings.

Does he even realize that approximately a quarter of the world’s population are Muslim? How do you even think about calling 1.5 billion people “inbred”? There are only about 320 million Americans, all breeding with each other… does that make us even more inbred?

Which Muslims are inbred? Because it sounds like he’s talking about all of them–are Indonesian Muslims all first cousins to Pakistani Muslims to Somali Muslims to Albanian Muslims to Turkish Muslims? There’s a level at which it is simply nonsensical to simply lump together all members of a large and diverse population and just announce that they are all alike, all one big massive clone of inbred defectives.

But in another sense, there is a grain of truth to the claim. It’s not Islam at fault, though; it’s that rural societies with diminished opportunities to travel have higher levels of consanguinity. Here, for instance, is a map of the frequency of marriages between second cousins or closer. 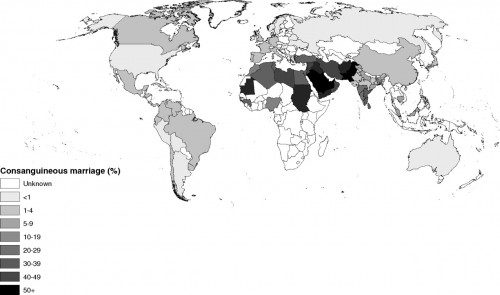 Although the Islamic world definitely has higher rates of consanguinity, it’s not uniform: northern India looks like Canada or Brazil, while Afghanistan, Saudi Arabia, and Sudan have more than half the marriages between cousins.

As it turns out, there are reasons only loosely related to religion that promote consanguineous marriages.

Although consanguinity is a highly complex and multifaceted topic, the claimed social and cultural advantages, such as ease of marriage arrangements, enhanced female autonomy, more stable marital relationships, greater compatibility with in-laws, lower domestic violence, lower divorce rates, and the economic benefits of reduced dowry and the maintenance of any landholdings have received much less attention than studies into adverse genetic outcomes. It therefore is not surprising that the prevailing Western public and medical opinion with regard to consanguinity is largely negative. There is the additional problem that in many societies that favor consanguineous unions marriages are usually arranged by and/or meet with prior parental approval, a practice frequently misrepresented and criticized as “forced marriage”.

For families living in impoverished rural areas with limited or no formal education or access to medical services, young age at marriage and first pregnancy, short birth intervals, and high infant and childhood mortality rates primarily caused by infectious and nutritional disorders, the social and economic advantages offered by consanguineous marriage and the strengthening of family relationships often outweigh the biological disadvantages of close-kin marriage for a majority of families. The current scenario in urban populations is quite different, especially in developed countries with better living and public health conditions, low levels of infectious disease, and ready access to modern health facilities. Newborns with a genetic disorder that in previous generations may have died in infancy of no known cause are now referred to specialist centers for diagnosis, and they and their families can anticipate a lifespan that will extend at least into adolescence and more probably into mid to late adulthood, usually requiring ongoing medical care.

Biologically, it’s bad, but sociologically, it makes sense. It’s not a Muslim problem, though, it’s a local problem in communities with limited opportunities: I don’t see Dollard demanding military action against the Amish, who are really inbred, or against the European royal families.

Dollard doesn’t distinguish between local communities and the entirety of the Muslim world, though.

There is no doubt that the wide spread tradition of first cousin marriages among Muslims has harmed the gene pool among Muslims. Because Muslims’ religious beliefs prohibit marrying non-Muslims and thus prevents them from adding fresh genetic material to their population, the genetic damage done to their gene pool since their prophet allowed first cousin marriages 1,400 years ago are most likely massive.

That’s ridiculous. A prohibition against marrying non-Muslims would only limit you to a quarter of the world’s population, so that can’t be the explanation. And characterizing that quarter of the world’s population as slack-jawed drooling inbred idiots is neither true nor helpful, while Dollard’s proposed solution (criminalizing marriages between cousins worldwide) is inhumane, unenforceable, and fails to recognize the complexity of these relationships.

I will say that as contemptible as he is, his commenters are worse: they’re proposing Mandatory sterilization of all new muslim inbreds and legal open season on these mohammed worshippers with no bag limit.

You can’t end consanguineous marriages by decree or at gunpoint. The only reasonable solutions are to give people in these regions economic and educational opportunities, and I can’t quite see these violent wingnuts endorsing the idea of treating Muslims as people, as deserving of dignity as we are.