Also, master of molluscan anatomy, and clever tool user. This paper, Homo erectus at Trinil on Java used shells for tool production and engraving, by Joordens et al. tells an interesting story from some mundane artifacts made half a million years ago.

What the investigators have is a jumble of clam shells, found in the strata where Homo erectus bones have been found elsewhere. These shells have been modified — the inference is that H. erectus was living along the shore, gathering clams, and popping them open to eat.

First, evidence of tool use. Many of them have small holes, precisely gouged into the shells at a specific location, and these holes do not resemble in detail the damage done by other mollusc-eating animals. The closest thing to the kind of damage done in these shells was made by using a shark tooth (common in the area), and twisting the point against the shell. 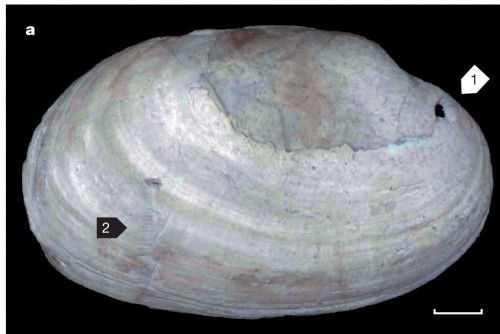 Second, they knew something about these molluscs. The holes were punched precisely above the attachment point for the adductor muscle, the big muscle that clams use to clamp their shells shut. Experimenting with modern clams, the authors found that one small hole above that attachment would damage the adductor, so the shell would easily open. Brilliant! Now I want to go dig some clams and try it myself.

And finally, doodler. One of the shells had some remarkable markings engraved on the inside — straight lines and a rough geometric pattern. The authors are quick to say there is no reason to justify calling this art, or something of religious significance, the two usual explanations trotted out for ancient paintings. I’m going to go out on a limb here, though, and suggest that our mighty clam hunter was doodling. 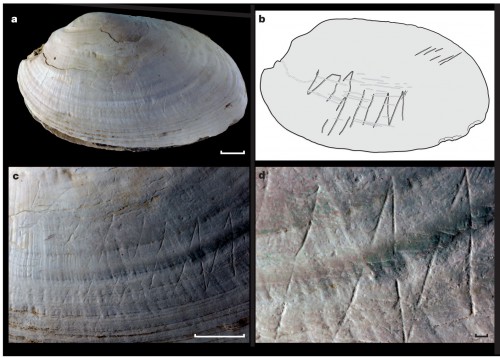 So after a delicious sea food dinner, H. erectus is relaxing, taking it easy, playing with the leftovers. And just to pass the time, she takes one of her handy shark teeth and scratches a mark on the shell — and then a few more. No big deal, she’s just a big ape exploring her environment with those dexterous, clever hands, and making idle doodles to entertain herself.

Who knows where this could lead?