This is a guest post by Sadaf Ali (@SadafEXMNA) of Ex-Muslims of North America.

Shortly after the Reza Aslan segment from CNN made its rounds on all of our newsfeeds, the scuffle between Ben Affleck and Sam Harris was soon the next big thing to share. My colleagues and co-founders, Sarah Haider and Muhammad Syed brought their perspective to the table with regards to Aslan’s apologism, as shared on Hemant Mehta’s blog on Patheos.

I have a personal appeal to Ben Affleck, after his participation on Bill Maher’s show, because it is attitudes like his that have historically made little to no room for ex-Muslims, secular, reformists, liberal or progressive Muslims to own a dialogue that is supposed to be ours to discuss.

I think it is important to notice how I referred to the event on Maher’s show as a scuffle and not a debate. That’s because it wasn’t a debate. There was no exchange of ideas. In fact, the mere suggestion of the criticism of Islam was slammed as ‘racist’ and ‘Islamophobic’ by Affleck. 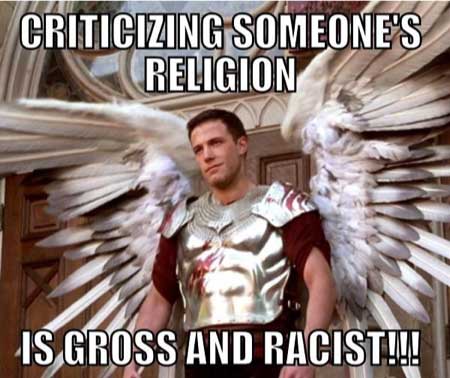 Affleck also said something that shows his own ignorance. He said the US kills ‘Muslims’.

One: Muslim is not a race. Two: Islam is an ideology. Three: Islamophobia is not real. Four: Anti-Muslim bigotry is.

The Middle-East and Central Asia is comprised of several ethnic and cultural identities with a range of religious affiliations (and like in my case, no religious affiliation at all). In the same way one conflates the criticism of Islam as a racial issue – i.e. treating all Muslims as one and the same – Affleck himself is treating all of the Middle-East and Central Asia, where the US intervenes often, as a monolithic race of people. How liberal and progressive. Furthermore, most Muslims are South Asian or of South Asian descent but when has the US dropped bombs on India?

When bombs drop and when bullets fly, how does one know the religion of a target or civilian? I am an Afghan Tajik and I am an atheist. Afghanistan and Iraq consist of Muslims, Jews, Christians, atheists, Zoroastrians, Bah’ais, Hindus, Sikhs, Buddhists and more. So, chances are, not every person that has been a victim of these conflicts are Muslim. Shame on you, Ben. It is people like you who are complicit in denying our diversity.

Affleck uses the death and suffering of my peoples as a tool to suffocate the discourse of Islam and as an Afghan-Canadian, I am upset by this. How dare you? Islam as an ideology is not flawless. No ideology is. Much in the same way Affleck played a part in the film ‘Dogma’ to satirize or criticize Christianity, others are allowed to criticize Islam. Furthermore, Islamists must be confronted. Those who preach the death of apostates and LGBTQ peoples, and seek the inequality of genders and wish to marginalize minorities must be condemned.

The thing that made the scuffle worse was the straw man argument. No one there on the panel insinuated that the flaws in Islam should be used as a justification to murder innocent people halfway across the world. Affleck fails to acknowledge the pain, alienation, ostracization and abuse people also face here in the name of someone’s literal interpretations of Islam. Islamism isn’t just about terrorism. Islamism poisons our cultures around the globe. Islamism hurts me. Islamism hurts apostates. Islamism hurts non-Muslims. Islamism hurts our families. And most of all: Islamism hurts Muslims.

Really though, how ironic is Affleck’s myopic view of Islamism that it comes down only to racism and terrorism? There are many reasons why Ex-Muslims of North America (EXMNA) exists. We have problems here in Canada, the US and Europe. This is not just about war, killing Muslims or your white guilt. This has to do with what our lives are like as Muslims, in secular nations and less privileged places like theocratic regimes. When Affleck uses ‘Islamophobia’ and ‘racism’, how am I, a former Muslim, and a person whose loved ones are Muslim, supposed to be able to address the issues I face? Do I not matter?

In my activism the past three years, it has been an incredibly tough journey being told that others simply do not want anything to do with calling for the reform for secular, accepting values because it all comes down to a big, ugly “race problem”. Last time I checked, Islam wasn’t exclusive to a single “race”.

Am I then a racist for criticizing scriptures that clearly condone the infantilization of women, the allowance for physical means to control women and the condemnation of a queer apostate such as myself? Am I, as a secular humanist who is directly affected by my cultural and religious communities, communities in which homophobia, transphobia, sexism and racism exist, not entitled to acceptance, love and dignity? What about those brave and selfless individuals in theocratic regimes who suffer and put their life on the line for their rights? Am I then asking for bombs to be dropped on innocent people? Are activists in theocratic states asking for bombs to be dropped on them?

Who can then rightfully criticize Islam? I mean, Ben, do you understand the “codified doctrine of Islam”? Does Sam Harris? Does Bill Maher? Do any one of you that sat on this panel understand it? Let’s take a look at that panel. 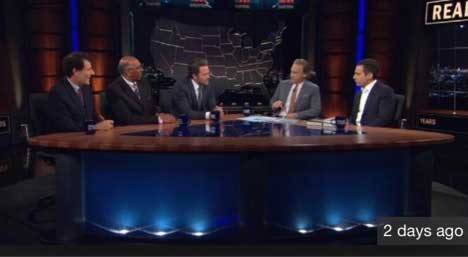 This panel is much like many other panels on Islam: not a single person of Muslim background who has a vested interest in fostering dialogues about our families, our communities, the laws and cultural paradigms that form our lives, our livelihoods, and our journeys into and out of Islam, is present. It’s a panel of non-Muslims coming together to steer discourse that has little to do with them personally who have not a single clue what it is like to live as a Muslim or ex-Muslim in our continent or overseas.

I find this incredibly sad. I call this liberals and supposed progressives failing us. Badly. We wouldn’t find a panel on the racism faced by black people without a single black person on the panel acceptable. Nor would we have a panel on transphobia without trans folk. So, why would this panel be acceptable? It’s not.

It’s panels like these that further alienate us. When there are no people present who have a good grasp on the subject, it further enables how the criticism of Islam gets conflated with bigotry towards Muslims because there are no Muslims or people of Muslim backgrounds there to speak for themselves.

I also want to make it clear that I understand where Affleck is coming from. I’m sure he, and many Muslims who enjoyed his display of anger on the show, have been enraged (rightfully so) by the constant racial profiling, othering of those who belong to Muslim communities, and of course, US foreign policy and militaristic interventions that affect our peoples overseas, our nation’s’ troops and the loss and suffering of human lives, regardless of a direct connection to them or their cultures.

I understand this anger. I once held the same anger, and to a large extent, I still do. Many ex-Muslims do. During the time I identified as Muslim and even after having left Islam, because of my name, because of the way I look, because I am Afghan, and because of the cultural disconnect I had with non-immigrants in a post-9/11 North America, I faced bigotry and racism.

Like many, I was at the receiving end of terrorist jokes. I was called Saddam Hussein for most of my adolescence. I was often asked if I was related to Osama Bin Laden or if I’m ashamed that an Afghan plotted 9/11. I was told to go back to my country, despite having been born and raised here to two, hard-working and strong refugees who escaped the throes of the Soviet invasion, civil strife, discrimination (middle-class Muslims were a target), bombs and violence. My life is predicated on war and intolerance. I’ve seen and heard it all.

Soon after I lost my faith, I was wholly unwelcome. I was ostracized. Friends and family shamed me for saying I don’t believe in god. My experience is benign when compared to some of the members of EXMNA. Many deal with physical, sexual, emotional, verbal and financial abuse. Many women are highly constrained by modesty doctrines and were forced to wear hijab or niqab against their will. Few were forced into marriages. Some were correctively raped for being queer by the person their families married them off to. These are stories about people in Canada and the US. These are people who deal with Islamism, Ben. It is important to have allies to stand with us. Standing with us is just as important as understanding that not all Muslims approve of this or will perpetrate such horrid things to people they claim to love all because of a lack of faith or even a progressive take on Islam.

And the Muslims out there who do not hold these parts of Quran as part of their interpretation or practice of the religion, please do your part in condemning the bad. I also support Muslims who view religion and faith as something personal and not something to enforce on others.

But that doesn’t stop me from working towards calling out those who push their religious agenda on others, no matter the number or the stats. It’s unacceptable and I, and every person, Muslim or not, should be condemning it.