The debate about intelligent, extra-terrestrial aliens goes on, with the usual divide: astronomers insisting that the galaxy must be swarming with alien intelligences, which is popular with the media, and the biologists saying no, it’s not likely, there are probably swarms of single-celled organisms, but big multicellular intelligences like ours are probably rare. And the media ignores us, because that answer simply is not sufficiently sensational.

But we will fight back! Here’s an interesting review of the alien argument. There is actually a historical and conceptual reason why astronomers think the way they do.

In response [to a paper arguing that SETI was a waste of time], Sagan co-wrote a paper with William Newman “The Solipsist Approach to Extraterrestrial Intelligence” which right from the title attacks Tipler for believing Earth to be unique. Sagan is of course citing the Copernican Principle, which roughly states the Earth is NOT the center of the heavens. The Copernican Principle is the modern foundation for Astronomy, Cosmology and Relativistic Physics. Sagan thought anyone claiming the Earth to be special must be doing bad science. Here’s a typical quote: Despite the utter mediocrity of our position in space and time, it is occasionally asserted, with no sense of irony, that our intelligence and technology are unparalleled in the history of the cosmos. It seems to us more likely that this is merely the latest in the long series of anthropocentric and self-congratulatory pronouncements on scientific issues that dates back to well before the time of Claudius Ptolemy.

It’s all about our perception of the rules. Astronomers see a universe with uniform laws that set up similar patterns everywhere: stars, rocks, gas. Life is lumped in with rocks as a phenomenon that just pops up everywhere, and with their limited idea of biology, just see all life as life like ours. Biologists also see universal laws, but we know from our experience that those laws generate endless diversity — there are millions of species on this planet, and each one is unique.

Now unlike Astronomy, the discipline of Biology takes a highly favorable view of uniqueness. Evolution constantly discovers quirky and highly contingent historical paths. Biology takes it for granted that everybody is a special snowflake. In fact the third sentence of Tipler’s 1980 paper calls this out:

The contemporary advocates for the existence of such [extraterrestrial intelligent] beings seem to be primarily astronomers and physicists, such as Sagan (2), Drake (3), and Morrison (4), while most leading experts in evolutionary biology, such as Dobzhansky (5), Simpson (6) Francois (7), Ayala et al. (8) and Mayr (9) contend that the Earth is probably unique in harbouring intelligence, at least amongst the planets of our Galaxy.

And as quoted in Mark A. Sheirdan’s book, we have eminent Evolutionary Biologist Theodosius Dobzhansky (“Nothing in Biology Makes Sense Except in the Light of Evolution“) joining the fray:

In his article Dobzhanksy turned Sagan’s argument on its head. Dobzhansky cited the fact that of the more than two million species living on Earth only one had evolved language, extragenetically transmitted culture, and awareness of self and death, as proof that it is “fatuous” to hold “the opinion that if life exists anywhere else it must eventually give rise to rational beings.”

And here’s a nice, short table to summarize the differences. 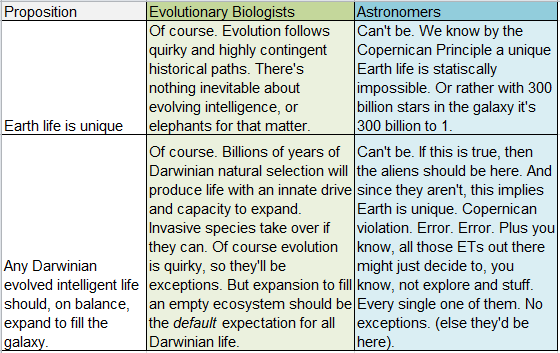 I have to add that it is probably another of those universal laws that Darwinian replicators will expand to fill an empty ecosystem, but that there are many ways to do that. It’s also a rule that the replicators are exploiting short term advantages to supplant competitors — there is no teleological imperative that says Strategy X is a good one, because while it slows our species down for the next billion years, there’s a chance we might build spaceships two billion years from now. Spaceship building is never going to be a selectively advantageous feature — it’s only going to emerge as a spandrel, which might lead to a species that can occupy a novel niche. And that means that spaceship builders are only going to arise as a product of chance, which will mean they’re going to be very rare.

On the other hand, a species that does successfully exploit space as an ecosystem is going to have a phenomenally fascinating future history of radiating forms. Think of the first space colonizers as equivalent to the first cells that evolved a metabolism that allowed them to exist outside the coddled, energy-rich environment of a deep-sea vent. It’s only the first step in a long evolutionary process that’s going to produce endless forms most beautiful…and also unexpected variations. It’s silly to expect that the successful, thriving interstellar life forms will be bipeds adapted to life on a planetary surface, living in large metal shells as autonomous agents crewing a spaceship. The real thing would be alien, and probably terrifyingly incomprehensible.