You get mail. Nicely written, printed letters in the mail. And they confirm everything I said.

So a lot of Fox News viewers have been writing to me lately, expressing their outrage that I would dare to suggest that racist newspapers out to be thrown off campus. And a great many of them have another odd, common thread, something that wasn’t in the Fox News report, but apparently all these rabid tea-baggers have inferred it, and they’re pretty darned insistent that it must be true.

I must be Jewish.

Take it away, Bob in Boca: 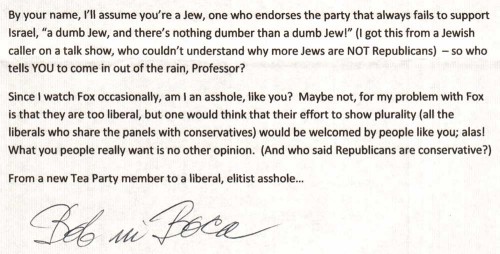 “Myers” is not a Jewish name. I wouldn’t be at all put out if I’d had some Jewish ancestry, but I’m afraid that my father’s ancestry has been traced back to the 16th century (mostly Scots/Irish/English ne’er-do-wells living marginal lives along the western American frontier), and my mother’s back to the 14th (Scandinavian peasants who never wandered far from their village), and I’m afraid there’s no evidence of any Jewish family. I’ve never hinted that I might be Jewish. People who know me have never made the assumption that I might be a cultural Jew.

The only people who call me Jewish are right-wingers who write to me to chew me out for some great liberal evil I’ve committed, and a surprising number of them do so. They never speculate that I’m Lithuanian, or tell me that my name sounds suspiciously Belgian, or sneer at my obvious Sinhalese bias — it’s always this bizarre insinuation that I’m a wicked anti-American liberal, therefore…Jew.

It says a lot about them. Not much about me. Why are so many teabaggers implicitly anti-semitic?

#CDCVax is the Twitter place to be today » « A new programming language, Avail