He hates Tiktaalik. He hates it so much he even has a hard time spelling its name correctly.

Tikaalik is again being popularized through the new PBS series "Your Inner Fish.” it’s really a desperate con job on the part of evolutionists who can’t defend their evolutionary fictional story.

He actually surprises me a little bit: one of his arguments that it can’t possibly be a transitional form is that it is only a fossil. That’s one I hadn’t heard before. So extinct species can’t be evidence for evolution anymore, because only living species count?

Because it belongs to the group of lobe finned fishes (like Coelacanth /lung fish), and is only found as a fossil, the secularists force their evolutionary worldview onto this fossil in their desperate need to try to convince the world they have found a transitional form (when in reality such transitional forms should be abundant both fossilized and living).

I have heard creationists tell me, though, that extant forms can’t be ancestral (obviously), therefore living examples of intermediate forms can’t be used as evidence for evolution, either. That leads to perfect, irrefutable arguments for creationists.

Evilutionist: “The shared expression of Sonic Hedgehog and it’s homologous role in limb development in the limbs of different forms is evidence of common desc…”

Creationist: Doesn’t count. It’s alive. Are you trying to pretend that modern limbs are ancestral forms? God clearly created it that way.

Evilutionist: “OK, here’s Tiktaalik with limbs that exhibit a bony core of homologous…”

Evilutionist: <stunned into silence by the stupidity>

Seriously, reading anything by Ken Ham is discombobulating.

They claim that Tiktaalik is the link between fish and “terrestrial tetrapods”—four legged animals that walk on land. Tiktaalik’s discoverer Neil Shubin even calls his big fish a “fishapod” to emphasize his belief that it is a transitional form. (Most people hearing about Tiktaalik even think it had limbs, but it didn’t—it just had fins, like fish do. Having a special kind of fins with bones in them—as lobe-finned fish do—did not mean they were legs or limbs.)

Having a special kind of fins with bones in them…but, but, but — that’s what makes them transitional. They have a combination of characteristics of the fins of fish and the limbs of tetrapods, being neither quite one of the other. Once again, we enter the realm of Catch-22. 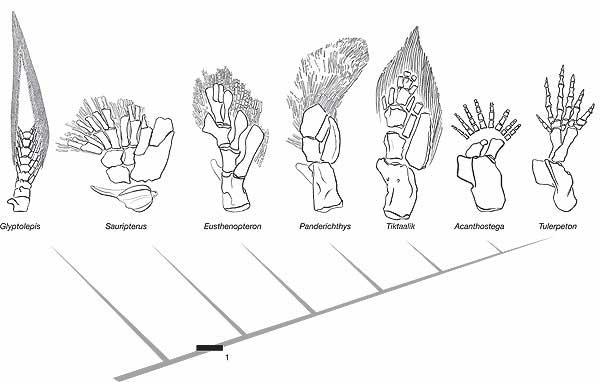 Evilutionist: “Here’s the Tiktaalik limb. It’s got these internal bones, unlike a fish fin, that are similar in organization to our limb bones…”

Evilutionist: “But it wasn’t strong enough or anatomically capable of actually walking on land, and it’s got traces of membranous fins…”

Creationist: Then it’s a fish. Case closed. It’s got to be one or the other, because transitional forms don’t exist, therefore I say it’s all fish.

Evilutionist: <wondering why she is wasting time with this idiot>

It wouldn’t be a Ken Ham rationalization if it didn’t drag out his usual claim that both the evilutionist and the creationist are using the same data, and only differ in the worldview they use to interpret it.

All this talk about Tiktaalik is also a reminder that the battle is not ultimately about evidence–Liz Mitchell and the evolutionists are looking at the same fossil. It’s not the fossil that’s different–it’s the worldview one has (and the starting point it is built from–God’s Word or man’s word) the determines how one interprets this fossil in regard to the past. But looking at the fossil, one can see it won’t directly fit into an evolutionary worldview–but it does fit directly into a worldview based on the Bible, as it is a particular type of fish for which we have similar types of living examples (e.g. Coelacanth ).

But we aren’t using the same data. The scientist is using the totality of the data, looking at both similarities and differences, to try and account for its place in history and biology. The creationist, as Ham has just clearly demonstrated, handwaves away all the unique characters of the fossil to claim it’s just like a coelacanth or a lungfish — he is explicitly ignoring any datum that contradicts his presupposition that it must be just another fish.

And then to take it that extra step further, and argue that his naive vision of what Tiktaalik was, stripped of all of its significant and unique characters, is somehow evidence for creationism that contradicts its clear evolutionary niche…