And I don’t have a lot to say. If you were looking for horrifying tales of creationist stupidity and extravagant inanity, it wasn’t here — it was a fairly typical range of posters, of the same sort you’d see at a public school science fair. Some were descriptive, some were about experiments; some were mundane, some were a bit out there; some you could tell Mom & Dad did most of the work, some were clearly driven by the passion of the students; some were rather poor, some were really good examples of kid science. The only difference between this and a secular science fair was the requirement to include a Bible verse on the poster.

There were about 2 dozen exhibits in a hallway on a Christian bible college, so it was on the small side. It was fairly busy, though, with lots of adults having conversations with the kids. 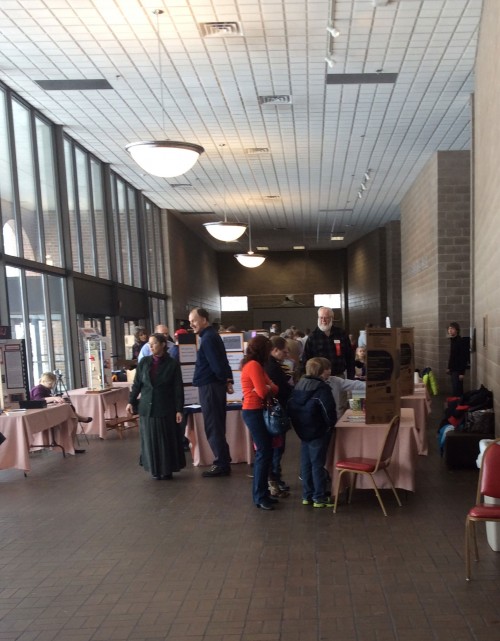 I actually came out of it fairly optimistic. The organizers might want to skew the kids towards their bizarre mythology, but in practice, the kids were having none of it; they were playing with pulleys or breeding rabbits or testing water quality or talking about bees, and it was all about the evidence. Whether they like it or not, these kids are being given the tools to kick their tired Christian ideology to the curb. Give ’em time. Let them keep thinking. Creationism is unsupportable by the honest application of the tools they are learning.

Also, surprisingly, the Bible verses on each poster were extremely encouraging. Nobody was testing biblical nonsense at all — there were no hypotheses, even, derived from the Bible. The overwhelming impression was that the kids had an idea they wanted to test first, and then, after the fact, slapped on a verse that somehow related to the experiment that they’d done. They were either non sequiturs or amusingly inappropriate. Take, for instance, this one: 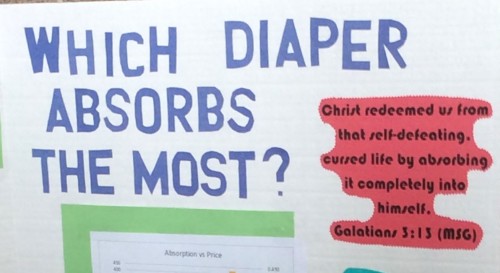 That’s right: this student just compared the absorbency of diapers to Jesus. I hope they think this through and that the true meaning of the Bible becomes apparent to them.

This was another one I appreciated. The Bible says “fear and dread” of people will be upon all the birds and beasts, so this kid’s idea was to test whether that hypothesis was true by seeing if he could tame birds. 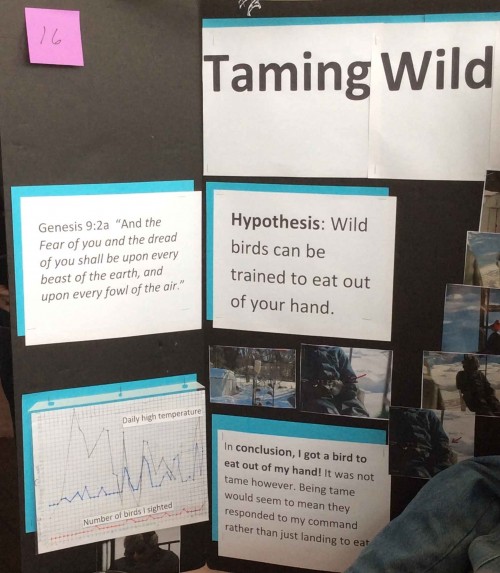 The result: yes, he could. Therefore, the Bible is false. Oh, wait, he didn’t actually say that.