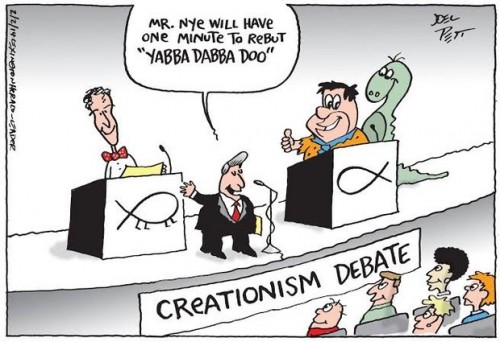 Tonight’s the night that Bill Nye and Ken Ham flail at each other in one of the more widely publicized creation/evolution debates of the year. I think Nye made major mistakes in setting this up — handing over total control of the venue and the revenues to Ham was just a tremendous error — but I’m hoping he’ll persevere through force of personality, if nothing else. Ham is this charisma-free guy who relies on a gospel-based script, while Nye has lots of charisma, but is going into an unknown situation where he’ll have to ad lib a lot. Could be interesting, could be a disaster.

The Cincinnati newspaper has Ham’s bio (I notice they didn’t return the favor for Bill Nye).

There are a couple of sites where you can watch the live debate, presumably. 7pm EST tonight will be your only chance to see it streamed for free; after that, your only access will be to buy the video from Answers in Genesis (see what I mean? Big mistake). If you really want to watch the debate, AiG is selling preorders of cases of 60 DVDs — they seem to know that this is going to be a big success for them, no matter what. Of course, that also means that evangelists will probably be handing these suckers out like candy, so you might be able to get a copy after all.

Don’t get your hopes too high for the streaming event, though. The tickets for the event sold out almost instantly, and it wouldn’t surprise me if demand overwhelms the streaming service, too…or if it mysteriously dropped out accidentally. I’ve been dealing with creationists for too long — I’m cynical, and they are the sleaziest mob of lying frauds around. I’ve only done a few debates, but every time, I get a call a few hours before asking to change the topic, for instance — they are all about the dirty tricks.

It’s that Christian morality, you know.

By the way, here’s a poll. It’s going the right way, but it’s kind of meaningless — the house at the debate is going to be packed with creationists.

Whose side are you taking on the origins of Earth and life?