I brought up that 2012 Gallup poll on evolution that showed we’ve been in the doldrums on educating the public about the subject — poll after poll for decades has shown that only about 50% of the American public accept the science.

The latest Pew poll for 2013 has a slight surprised for us: that number has reached 60%. It’s slow, but we’re getting there. 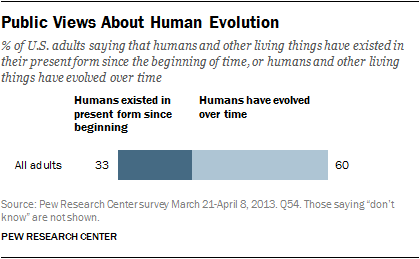 Now the bad news (there’s always bad news). Of that 60% who accept that humans evolved, how many get it right? 24% still babble about it being guided by a god, which is wrong, but at least that’s less than half of the evolution-accepters. 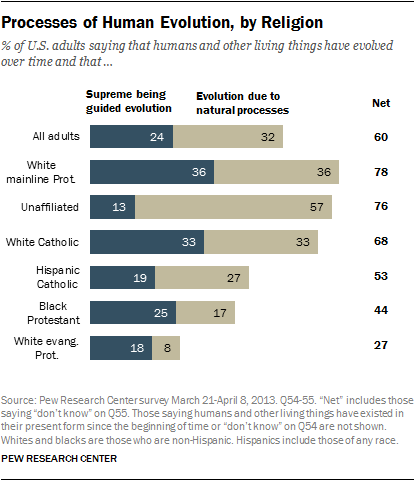 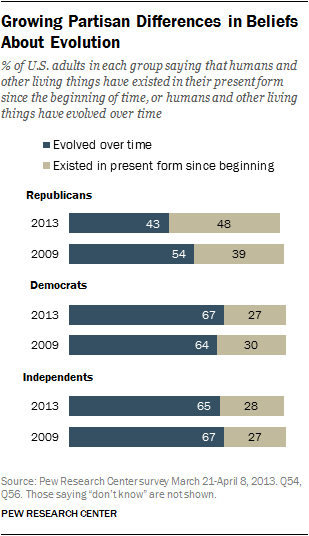 Of course, that probably doesn’t mean individual Republicans are getting more ignorant: it may be a sign of something much better, that the kind of rational citizens who can recognize the facts of a science are increasingly unlikely to identify as Republicans. I’m hoping it’s a sign that the Stupid Party is shrinking.

Of course, I could be wrong. It could also mean that the party is solidifying its ideology and more people are flocking to the Know-Nothing banner and they’re all rallying around their dogma. I hope that’s not the case; everything else I’ve seen says they’re busily marginalizing themselves.

The Supreme Court is full up on Catholics, I think » « Botanical Wednesday: So that’s what all that white stuff is outside?