Today is the day when nations around the world pause to celebrate their most colossal failures, the events that killed the greatest numbers of their citizens, that broke and crippled their men after they’d been intentionally trained to dehumanize other human beings. We love to take our young people, especially our young men and boys, and grind them up in bloody battles, and then once a year we remind ourselves of what we do, and we congratulate people for it. Dulce et decorum est pro fucking patria mori and all that.

Meanwhile, our veterans hospitals are crumbling (and desperately needed) and we talk about more wars with Iran or whoever crossed us most recently, and doesn’t have nuclear weapons with which to smack us back. But we’ll go to all the effort of saying “Thanks, gramps” to people who suffered in terror and terrified other sufferers right back. All so a few people can get richer, and so politicians can thump their chests and claim to be braver than other politicians.

I think the only way to honor veterans of war is to make sure there are no more veterans. They are not heroes, but victims. There is nothing brave or heroic about picking up a gun and threatening to kill someone for a matter of principle, or even worse, because someone else is ordering you to do so — and the repercussions of celebrating violence tear our society apart.

For example, four women in Dallas met for their state chapter of Moms Demand Action for Gun Sense in America — a quiet lunch in a local restaurant. Texas gun advocates got word of the meeting, and gathered in the parking lot outside. 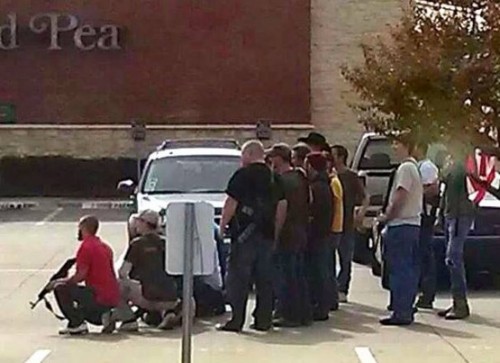 Brave heroes, all. In what world could such a gathering, intending to intimidate unarmed mothers, occur without the men involved withering in shame and guilt? Our world, obviously, where righteous terror with weapons in hand is celebrated. Perhaps these men will meet again in years to come, to remember the honor of being among the heroes who drew their weapons in the parking lot of the Blue Mesa Grill in 2013.

Just like right now, we honor those who carried arms against the young men of other countries, where right now, citizens honor those who carried arms to resist our young men. When are we going to wake up and realize that this is all madness, that it’s not a point of pride to be trained to kill, that we gain nothing and lose all when we settle disagreements with threats of lethal force.

How can we stop? Perhaps it would help to celebrate the right heroes.

I was horrified by this story of the Nazi scientific enterprise. The Nazi regime killed millions, members of despised ethnic groups, gays, and political dissidents, and some of their bodies were appropriated by the science establishment for medical studies. As the article reveals, sometimes scientists would go out to the prisons and mark certain individuals as desirable for their research; one, for instance, wanted to study the effects of stress on the menstrual cycle, so young women in a state of terror for their lives were particularly desirable (these are the studies our Republicans now cite when they want to claim that raped women don’t get pregnant!). It’s a terrible tale of scientists closing their eyes to the consequences of their work, and worse, actively participating in murder.

It tells of a young couple, Harro and Libertas Schulze-Boysen, who worked for the resistance against the Nazis, were caught and executed, he by hanging, she by the guillotine, and their bodies ended up on the anatomy table. Charlotte Pommer, a medical school graduate working as an assistant in the Institute of Anatomy, walked in to the lab to work and recognized the bodies waiting for her.

“I was paralyzed,” Pommer later wrote of the sight of the bodies. “I could hardly perform my task as an assistant to Professor Stieve, who did his scientific study as always with the greatest diligence. I could barely follow.”

Pommer was 28. Libertas Schulze-Boysen was 29 when she died. In her last letter to her mother, she said she’d asked for her body to go to her family. “Don’t fret about things that possibly could have been done, this or the other,” she wrote. “If you can, bury me in a beautiful place amid sunny nature.”

Pommer stopped working for Stieve—and left the field of anatomy—because of what she saw that day in his laboratory. She went on to help resist the Nazis herself, by hiding the child of a man who participated in the “July Plot” to assassinate Hitler in 1944. In the spring of 1945, just before the war’s end, Pommer was herself sent to prison.

So on this Veterans Day, I choose to honor the conscientious objectors and the Charlotte Pommers of the world, rather than the participants in war. They are the real heroes, the ones who made the greatest sacrifices to better humanity.

Meanwhile, look at what the media find important today: the poppy on Google UK’s search page isn’t big enough. But Bing puts a big photo of a poppy on their search page. Jesus fuck, millions dead in wasteful war and the big issue today is whether a photo of a flower is big enough to honor them properly.

Step back, and look at this violent planet » « I think I’ve forgotten how to play air guitar