We encountered Ms Bliss yesterday, when I was criticizing that ghastly Newagey article on cystic fibrosis that she authored, and which the Guardian Express later withdrew. She babbled some nonsense about genes from host tissue somehow migrating into lung transplants, and then went on about how cystic fibrosis, a genetic disease, is somehow caused by bad emotions. It was total garbage, through and through.

Remember, she is the Health editor for this online newspaper, and her head is full of pseudoscientific quackery.

She’s also supposedly the science editor. She’s full of shit there, too. You must read her piece on DNA and evolution. She knows nothing about biology — she’s reduced to spewing nonsensical crap right from the beginning.

Inside each and everyone of our cells is an amazing blueprint containing all of the information to create you again. Scientists have identified 2 strands of these amazing building block storage containers of life and call them DNA or Deoxyribonucleic acid, the molecules containing all the genetic information and instructions for your being. So, what about these other strands which scientists have not identified as useful…the one’s commonly called ‘junk’ DNA and now refer to softly as noncoding DNA? Did you know that somewhere around 98% of all human DNA fits into the category of noncoding DNA? Only 2% accounts for the genetic functions and life-building codes we are familiar with. We do know that some of that 98% has functions such as translation regulation of protein-coding sequences, but what is the rest for? Is it possible our DNA contains within it codes for our evolution as a species? Is it possible that by activating our noncoding DNA we would start to experience reality very differently?

Your first clue that she doesn’t have the slightest grasp on the concepts is when she tries to tell you that there are 2 strands called DNA that contain all the genetic information, and there’s…these…other strands? That are junk DNA? WTF?

I want to give her a test. A very simple test that I’m confident that she would fail miserably.

Draw the 2 strands of DNA. Just a rough sketch, no deep details needed, I’ll even grade generously. Show me that she knows what the hell she’s talking about when she says “strands”. And then I’ll ask her to point on the sketch to where the junk DNA lies.

This isn’t hard, and I’m not expecting a lot. For example, James Watson was asked to give a simple drawing of what he thought was an important formula or principle, and here’s what he came up with. 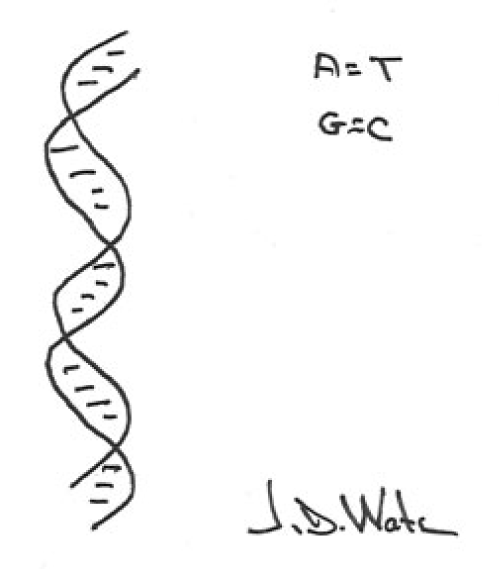 See? Easy! I don’t think Stasia Bliss could do it. Especially when you consider the next paragraph of her essay.

Many mystics, philosophers and spiritual teachers agree that the key to our evolution as a species lies within our DNA. If all strands of DNA were active, we would have 12 strands. According to some, each strand correlates with a different dimension of consciousness, or a different perspective by which we can experience this reality. Those who study and practice DNA activation techniques say the 2 basic DNA strands keep us at a very dense, physical structure and perspective of reality, but as we activate more DNA, our bodies change to become less dense and more ‘full of light.’ This state can be recognized in beings known in spiritual and religious traditions as ‘ascended masters’ with glowing halos and radiant skin. As evolution in consciousness occurs, and DNA ‘turns on’ it is speculated that this would mean a transformation from a carbon-based matter body, to a silica-based, and finally a crystalline liquid-light pre-matter state body, where the body would glow with light. According to sources, most of us have approximately 3-3.5 strands activated, allowing for the experience of only three dimensions of reality.

Hey, did you just feel something sticky and damp? Sorry. That was my brains, blood, bile, and colon contents exploding forcefully and spewing debris through my screen, up the ethernet line, out in a misty cloud of pulverized organic matter contaminating the interwebs, settling into your ports and dribbling out onto your keyboard. Sorry.

First order of business, Stasia: FUCK mystics, philosophers and spiritual teachers. You’re supposed to be a goddamn science editor, and these are your vaguely cited sources? Some mystic somewhere, who you can’t even name?

For that sin alone, Bliss ought to be fired. She is grossly unqualified for a position with that title.

At the end: “According to sources”. WTF again? According to who? She is unqualified to have a position in journalism, period. Fire her.

Next test: Draw a picture of 12 strand DNA. I double dog dare you. Be prepared: a squiggle like Watson’s above is only a preliminary answer, and if you manage to make up something coherent at that level, I will also drill down further and ask about the interactions of the nucleotides in your model.

I’ve encountered this “12 strand DNA” bullshit before: it’s a money-making scam from a quack who promises to show you how to activate your psychic powers if you buy his videos. It’s a fucking fraud. And here’s Stasia Bliss parroting it as if it’s reasonable science.

If this is symptomatic of the Guardian Express’s attitude towards science, that they’d hire this wretched incompetent buffoon to be their science editor, I hope their bankruptcy is imminent. It’s disgraceful.

Big ol’ shameless liars with a poll for Jesus » « An atheist goes to church: Federated Church of Morris