23 years ago yesterday, as my friends Judi Bari and Darryl Cherney were driving through Oakland, California on their way to appear at a Santa Cruz rally against clearcutting California’s remaining old-growth redwoods, a bomb exploded beneath the driver’s seat. Judi was in that drivers’ seat and nearly died of her wounds. She lived in constant pain until cancer took her life seven years later. (Thankfully, Darryl’s injuries were not as severe.)

The bomb was a home-made nail-filled pipe bomb with a motion-sensitive trigger. (The explosion happened as Judi and Darryl were driving past a middle school’s bus stop at Park and Macarthur boulevards in Central Oakland: it’s a wonder no one else was injured in the blast.) 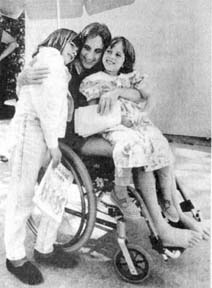 Judi and her daughters after her release from the hospital. David J. Cross photo

At the time of the bombing, Judi, Darryl, and their fellow Earth First! activists in Northern California had been the targets of a campaign of sustained harassment, including death threats. Mailed leaflets featuring Judi’s face with superimposed crosshairs, for instance. A few weeks before the explosion, Judi had been run off a rural Northern California road Silkwood-style by a logging truck. The local cops told her “if you get killed, then we’ll investigate.”

The context for this was that some time earlier, a local timber company — Pacific Lumber — had been bought out leveraged-style by junk bond trader Charles Hurwitz. Hurwitz  and his shell company Maxxam then started to liquidate PL’s holdings to generate cash. Among those holdings were some of the 5 or so percent of remaining old-growth redwood forests in California, which PL had previously been logging slowly enough that some people actually called the company a sustainable timber firm. Those trees started getting cut really quickly, endangering wildlife, the safety of timber workers , and the lives of people who lived downhill from the clearcuts.

Activists countered with a campaign modeled on the Civil Rights movement’s sit-ins, originally called Mississippi Summer In The Redwoods. Before long Judi and Earth First! had become central to the campaign, whose name was quickly shortened to Redwood Summer.

It was a really tense time in Northern California. Maxxam/PL managed to persuade some workers that the hippies were threatening their jobs, and the consequent conflict was ugly. That ugliness made the press fairly often. What didn’t make the press was the fact that Judi was an old-school union organizer: she identified more with the loggers than did most enviros, and she built some serious bridges between the two camps. Among other things, she got Earth First! in Northern California to renounce tree-spiking. She helped unionize a timber firm. Above all, she worked with timber workers to point out that sustainable logging meant sustainable employment, and that Maxxam’s cut and run practices meant mills would be closing as soon as the last tree was cut.

Still, those threats were out there and continuing. As horrified as we were when the bomb went off, it wasn’t particularly a surprise. What was a surprise was that the FBI arrived at the crime scene within minutes, and that the Oakland Police Department arrested Judi and Darryl before they’d been extracted from the ruins of Judi’s Subaru, charging them with transporting an explosive device. 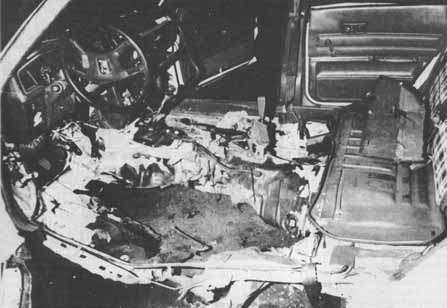 The interior of Judi’s Subaru, the blast damage showing that the bomb was directly beneath the driver’s seat and not in the back footwell. Oakland Police photo.

The architect of this legal strategy? Mythbusters’ bomb expert Frank Doyle, then a special agent with the FBI.

Four weeks before the explosion, Doyle had run what was called a Bomb Investigator’s Training Course in Eureka in which law enforcement agents blew up cars with pipe bombs and then examined the wrecks for forensic evidence. There are two things that are especially spooky about this confluence of events. First was that Doyle, on arriving at the corner of Park and Macarthur, told his fellow first responders — four of whom had attended that course — “this is your final exam.” His statement was caught on tape.

The second spooky coincidence was that the bomb’s construction closely paralleled that of the practice bombs used at Doyle’s “bomb school.”

Doyle told the press that the damage to the car showed that it had been carried behind the driver’s seat, therefore was visible to the passengers, therefore they knew it was there and were deliberately transporting it. That lie was thoroughly shredded in a later court case, but at the time the press ran with it. Within two months all charges against Judi and Darryl were dropped for lack of evidence. You still hear people refer to them as the “people who were carrying that bomb.” The act of character assassination worked — a sentiment with which a Federal court judge and jury agreed.

Judi died of metastatic breast cancer in March 1997, leaving behind two young daughters. In 2002, that federal judge ordered Oakland cops and FBI agents to pay $4.4 million to Darryl and to Judi’s estate for violating their civil rights. During the trial agents admitted tracking Judi and Darryl for weeks before the bombing. The forensic evidence was clear. It was pretty much an open and shut case.

I am not saying that Frank Doyle had  other than an after-the-fact a role in the attempted murder of my friends, though it wouldn’t shock me if I found out that he did. But Doyle absolutely did thwart an effective investigation of that attempted murder. That’s a matter of established record. He ignored obvious leads, misrepresented evidence, and worked to frame activists for a horrible act of violence against them.

And nonetheless, Adam Savage and Jamie Hyneman decided to use Doyle as their go-to guy for explosives on Mythbusters. Despite the fact that Doyle tried to destroy two lives with a myth of his own concoction.

Let me be clear about one thing. Judi was not just targeted for being an environmental activist. The worst harassment, the worst threats that Redwood Summer activists received were directed at women. My friend Karen Pickett got some of those threatening letters too, and they were rife with misogyny to the point of being nearly laughable, before the bomb went off. (The accusation that women Earth First! activists were “box lunch eating lesbians” got used a lot.) One of the prime uninvestigated suspects in the bombing, a blithering godbag calling themself the “Lord’s Avenger,” claimed responsibility for the bombing and said it was in retaliation for Judi doing clinic defense at the Ukiah office of Planned Parenthood. That may or may not be true, though the Lord’s Avenger did apparently possess some interesting knowledge about the bomb’s construction.

Either way, Judi’s feminist activism definitely played a more than significant role in her being targeted. Male Earth First! activists got threats, and some of them were scary indeed. But it was the women who bore the brunt of the threats and harassment, and Judi paid the biggest price. 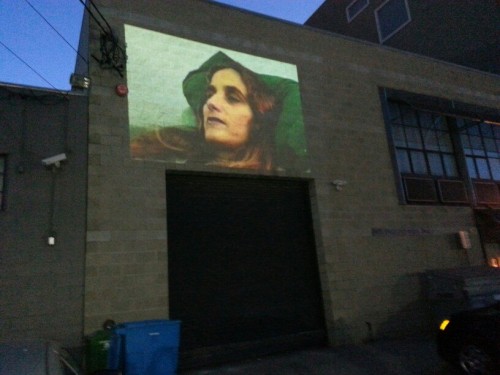 The film “Who Bombed Judi Bari?” screened on the outside of the Mythbusters building in San Francisco, May 24 2013

Which raises a question. For all the criticism it has received for being sensationalist and superficial, Mythbusters essentially serves as a public face of Skepticism to viewers who have never heard of Skepticism. Yet apparently it’s no big deal for Adam and Jamie to support, employ, and publicize a man who may have helped target a feminist environmental activist for unbelievably painful harassment, and who certainly provided effective cover for the people who tried to kill her.

Darryl Cherney, who has plowed some of the proceeds from the court settlement into making a film about Judi, is trying to get Jamie and Adam to explain why they employ Frank Doyle. They’ve been reluctant to answer, even though Darryl went so far as to offer a free screening of the film on the wall of Mythbusters’ building this weekend.

Anyone concerned with the role of women in the Skeptics’ movement ought to ask them for an answer.

We’re here at Pharyngula and it’s still …. Caturday! » « The diversity of Diversity