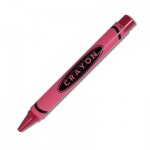 I’ve been trying to understand how people — not just people, but self-declared “leaders of the atheist movement” — can claim that atheism is only the lack of belief in any gods, and further, that absence of god-belief entails no other significant consequences. It’s been difficult, because that way of thinking is alien to me; atheism for me is all tangled up in naturalism and scientific thinking, and it’s not just a single, simple cause but has a whole cascade of meaning. But I’m trying, and I think I’m beginning to get it. There is a reasonable way to regard atheism as important while at the same time limiting its import.

Think of atheism as something like having a favorite color in a world with a set of cultural mores that dictate the value of colors. You’re five years old, and in kindergarten, and the teacher asks you to draw a picture of your mommy in your favorite color. You proudly go for the big red crayon in your box, and you start to draw, and everyone in the class turns to look at you strangely…and every single one of them is holding a blue crayon. “Everyone knows your favorite color is supposed to be blue,” they say, “You’re weird.” The teacher helpfully takes your red crayon away and gives you a blue one instead.

You might be a little resentful. You might think this is an infringement of your rights and an attempt to police your thoughts, and you’d be right. That would be a terrible thing to do to children. And then, what if you grew up and discovered that enshrined in your country’s constitution was a clause that specifically said the government did not have the right to dictate the citizenry’s favorite color? Why, you might become a crayon activist, fighting for the right of everyone to choose their own color, and you’d go to meetings where everyone would wave red crayons in the air and draw slogans on signs in red.

You might even be angry with other militant red crayon activists who tried to explain why red was the best color — that smacks too much of the blue crayonists who spent your childhood nagging at you why blue was the best. No, your cause is simply to let everyone have the right to choose their own color — it’s all about individual liberty and freedom of conscience. The crayon has no meaning beyond personal expression, and you don’t believe these stories that it has further implications, and you certainly don’t want to discuss why you liked red the best. It just is.

I sympathize with that perspective, and I think it’s entirely valid. There is a level at which you can fight for atheism in our culture purely on principle — that everyone should have a right to personal beliefs without meddling interference from outsiders, and certainly the government should not be in the business of supporting religion or its absence. There’s also a purely legal component to the argument, since America does have a constitution that plainly says “”Congress shall make no law respecting an establishment of religion, or prohibiting the free exercise thereof” — you can be a believer and still support the rights of atheists, just as someone in your kindergarten class could favor blue but still respect your choice of red.

But like all metaphors, this crayon story breaks down.

If religion were a purely personal matter, a case of individual preference (and for many people it is), the analogy would hold up. When we “militant” atheists speak about eradicating religion, that’s really what we mean — not that we’ll close all the churches and force everyone to publicly repudiate their faith, but that it will be reduced to a curious hobby or matter of choice, something that you might feel deeply (BLUE IS THE BESTEST COLOR!), but that you don’t get to impose that view on others, and that on matters of public policy, everyone will approach problems objectively and try to make decisions on the basis of evidence, rather than opinions about angels and ghosts and what’s best for your afterlife. So, yeah, someday I want your choice of religion to have about as much significance as your choice of a favorite color.

But that day is not now.

Religion is not merely a matter of taste. People attach great importance to an irrational explanation for how the universe works, to the degree that they use it to shape government and community decisions. You cannot get elected to high office in most districts in the US without professing a belief in a god — and in most places, it must be a belief in the specific Christian god. They use their irrational beliefs to justify actions that have real effects on thousands or millions of other people: we can pollute the atmosphere because god says we have dominion, and he promised to not ever kill us en masse again; black people and women are destined to servility because the holy book says so; you should punish or ostracize people who do not have sex in the traditional ways of your people.

Religion and atheism are not just different colors in the box of Crayolas.

Some of us are atheists for different reasons than just arbitrariness or thoughtless acceptance of a particular perspective. Among the New Atheists, we’re largely in this position because we reasoned our way to it, or adopted doubt and testing as our philosophical guidelines, or preferred science to faith. Atheism wasn’t a choice at all: we’re naturalists who accept observable reality and the universe around us as the metric for determining the truth of a claim, and every religion fails that test spectacularly, while science struggles honestly to accommodate understanding to the evidence.

I didn’t “choose” atheism. I can’t reject it without paying too high a price, the simultaneous rejection of a vast body of knowledge and a toolset that effectively discovers new knowledge.

Atheism also has implications. It actually makes significant claims about the nature of the universe…you know, that place we live in? The big box of rules and phenomena that determines whether we live or die, and how happy we’ll be during our existence? It’s important. As a science educator, that understanding of our world directly affects my occupation. As a human being, it directly determines how I will live my life.

When I say there is no god, it means that the foundation for a huge number of arguments that currently poison public policy evaporate. God created woman to be a helpmeet to man and to serve him as man serves God? Nope. We’re going to have to actually look at the evidence and determine from observations whether women are inferior (answer so far: no.) Black people were marked with that color as a curse from God and have servile natures? Nope. No god, no curse, no way to claim independent peoples are destined to be master or slave. Two men having sex together is an abomination unto the Lord, and the only fit response by a moral culture is to kill them, or at least abuse them? Nope. Your objective moral standard is a fiction, and perhaps a truly moral culture is one that gives all of its citizens equal respect.

Being an atheist means you can no longer learn your moral code by rote and tradition and obedience to authority*, but have to rely on reason and empathy and greater human goals, and you don’t get to justify actions simply because they “feel” right or good — you have to support them with evidence or recognition that they directly serve a secular purpose. Our atheism, our secularism, our rejection of divinity and ecclesiastical authority determines how we move through our life, and that movement matters. It’s not superficial, it’s not a fashion choice, and the absence of god has meaning.

Thank you to those who are willing to stand up for atheism simply as a matter of choice and principle, but you should know and be warned that we intend to change the world. We are more dangerous than you can even imagine. And apparently, more dangerous than even some atheists can imagine.

*I have to add that many theists also accept a secular morality — they may like their religion, but they also recognize that you must have a better excuse for community action than “god said so.”

After they defeat Darwin, the creationists will be coming after psychiatry next » « Botanical Wednesday: Twisty