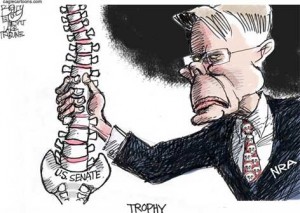 Yesterday, I could start the day with the happy news that New Zealand had passed progressive legislation, and then burst into song. Today I have to look at my home country, and…goddamn, but we’re a dysfunctional mess. America is basically a rogue state, run by plutocrats and incompetents.

After Aurora and Newtown, there was a surge of sentiment in favor of checking the extravagant dissemination of deadly weapons in this country. It’s just a little too easy for hateful lunatics and demented haters to get their hands on weapons of mass murder, and so people proposed taking baby steps and moderating America’s addiction to guns just a little bit. So a bipartisan bill made it to the senate that would have made small changes: it would have required more background checks for gun buyers, and it would have banned assault weapons and high capacity clips. These are not terribly restrictive rules. Who could possibly want felons or people with violent mental illnesses to be able to buy guns casually? Who needs a 60-shot magazine for an assault rifle?

The bill was defeated in the Senate. No word if the attending senators rose up and were led in a rousing chorus of Wango Tango by Ted Nugent afterwards.

Take a look at the roll call for the vote. It was almost perfectly split with the Republicans voting against it (Harry Reid joined them!) and the Democrats voting for it (with John McCain!). It was a simple, common-sense bill and the Republicans united to vote it down. I think it’s way past time that we voted every damn Republican down.

Gabby Giffords agrees. In her editorial on the vote, she says,

Mark my words: if we cannot make our communities safer with the Congress we have now, we will use every means available to make sure we have a different Congress, one that puts communities’ interests ahead of the gun lobby’s. To do nothing while others are in danger is not the American way.

She’s wrong about one thing: to let neglect and crime rule is the American way. We have to change it. It’s going to take more than just elections and laws, though, we’re going to have to change American culture. Because it’s ripe with assholes.

For example, one prominent right-wing, pro-gun voice is Instapundit. You might want to savor his response to Giffords. 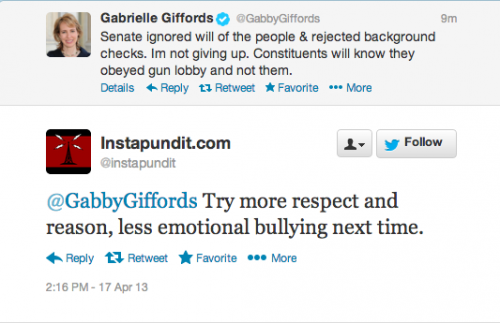 He’s telling a woman who was shot in the head and saw friends gunned down to stop bullying the gun lobby. We’ve got people who want to be able to make impulse purchases of weapons designed with one purpose — killing people — and Instahack calls the victim of one of their assaults a bully because she’s trying to promote sensible gun laws.

You can’t deny it. His is one of the voices of America.

But it’s long past time for the rest of us to tell the gun-obsessed macho boy-children to fucking grow up.