After that debate between Tzortzis and Lawrence Krauss that was overshadowed by the disgraceful anti-egalitarian exhibition of Muslim misogyny, iERA is now trying a new tactic: they’re releasing tiny snippets of the debate that they believe they can spin into anti-Krauss sentiment. Here’s a perfect example, Krauss’s reply to a question about the morality of incest.

The audience gasped when Krauss said it’s not clear to him that incest is wrong, and then he went on to argue that there are biological and societal reasons why incest is not a good idea, but that he’d be willing to listen to rational arguments for sexual and emotional interactions between siblings, for instance…not that he’d encourage such behavior. It’s a nuanced and complicated reply in too short a time, but otherwise, he’s not wrong.

But you know what Tzortzis is thinking: this is a perfect clip to play to the dogmatic mob, his people, who don’t do complicated and nuanced, and don’t care about rational arguments, only absolute dictates.

I’d add two other arguments that might sink in.

One is that religions also rationalize incest. Here’s the Protestant Christian example:

Since Eve was made from one of Adam’s ribs [Genesis 2:21-22], she would have been a clone of Adam and, had there been any genetic mutation in Adam, this would have been reproduced in Eve and expressed in their offspring. However, we may reasonably conclude that there were no mutations, and the very first commandment given to them was “to be fruitful and multiply” [Genesis 1:28]. However, the business at the tree of the knowledge of good and evil took place long before there were any children.

The account then continues where God confronted the guilty pair at the tree, but they did not confess their guilt or plead for forgiveness [Genesis 3:1-13]. God then cursed the serpent, imposed reproductive difficulties upon Eve and “cursed the ground for [Adam’s] sake” [Genesis 3:17]. From that moment, everything that Adam – and mankind since – ate had grown in the cursed ground. Cell by living cell, Adam began to very slowly change from his initial state of eternal perfection to mortal imperfection, and he finally died at the age of 930 years [Genesis 5:5]. Nevertheless, Adam and Eve’s immediate offspring would have been very close to physical perfection while brother-sister marriages were the only unions possible! Further, according to the genealogies given in Scripture, pre-flood longevity was about the same as that for Adam, so families were very large compared to those of today. Brother-sister unions were not only unavoidable, but they undoubtedly became traditional and expected.

it is a known fact that legislation differs from one Shari’ah to another, while the principles and beliefs remain the same in all of them. So, making of portraits was allowed in the Shari’ah of Sulayman (peace be upon him) but is prohibited in our Shari’ah. Similarly, making prostration of salutation was permitted in the Shari’ah of Yusuf (peace be upon him) but is illegal in ours. Also, war booty was prohibited for nations before us but it is completely legal for us. The Qiblah of people before us used to be towards Bayt Al-Maqdis, but for us it is towards Ka’bah. In a similar way, marriage between brothers and sisters was permitted in the Shari’ah of Adam (peace be upon him) as opposed to those that came afterwards. The following is a clarification on the issue by Haafidh Ibn Katheer, who said:

Allaah allowed Adam (peace be upon him) to marry his daughters to his sons for necessity. Every couple used to have a boy and a girl. Hence, he married the girl of one couple to the boy of another. This is said by Suddi regarding what has been narrated by Abu Maalik and Abu Salih, from Ibn ‘Abbas, by Murrah from Ibn Mas‘ood and by other companions of the Prophet (peace be upon him) that Adam did not have (in his grandchildren) a baby boy unless it was accompanied by a girl, so he married the male of a couple to the female of another, and the female of a couple to the male of another

So apparently their absolute moral prohibition against incest isn’t quite so absolute after all. A good Muslim can fuck his sister if Allah tells him to.

But the other example I’d give is current, and it’s done all the time. Ever looked at a purebred Arabian horse’s pedigree? It’s an incestuous nightmare, and it’s encouraged — it’s even regarded as a good thing to reinforce good stock with a moderate amount of inbreeding.

Here’s an example of a horse pedigree. Notice what’s going on? 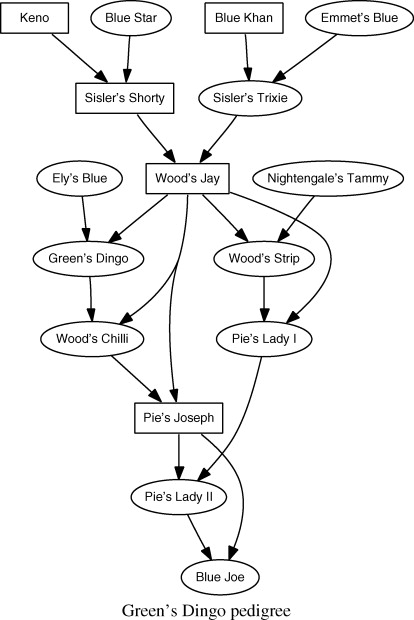 Look at Pie’s Joseph, for instance. He is the product of a breeding between Wood’s Jay and Wood’s Jay’s granddaughter, Wood’s Chili.

Let’s not even get into cows and pigeons. Here’s a quick glimpse at the sordid sex life of Favorite:

Are you squicked out yet? You shouldn’t be. This stuff is going on on farms all over the world. The biological prohibition isn’t quite as strong as you might think — if you want extremes of a phenotype, as you might in agriculture, trying to achieve selective homozygosity for specific traits might actually give you an advantage.

We tend to not want that kind of result in human crosses…although, if you think about it, an unscrupulous nation could embark on a breeding program for athletic ability that would benefit from a multi-generation pattern of incest…

But this all highlights a common problem: get into a debate with fanatics and ideologues like the iERA mob, and they will actually hold it against you if you actually consider the complexities of reality. We like both complexity and reality; how can you argue with someone who comes in with a bias that what you regard as virtues are sinful, and demands that the universe fit itself to their false simplicities?

Venue change for my Seattle talk » « I support the #tooFEW project