Oh, boy. The Intelligent Design creationists are all excited about a new paper that purports to have identified an intelligent signal in the genetic code.

Here’s a new paper that can be added to the growing stack of intelligent-design articles in peer-reviewed journals. Even though the authors do not use the phrase “intelligent design,” their reasoning centers on the detection of an intelligent signal embedded in the genetic code — a mathematical and semantic message that cannot be accounted for by a natural cause, “be it Darwinian, Lamarckian,” chemical affinities or energetics, or any other.

I’ve read the paper by ShCherbak and Makukov, and by golly, the Discovery Institute flack really has accurately summarized the paper: it does explicitly and clearly claim to have identified evidence of design in the genetic code! That’s newsworthy in itself, that the creationists can accurately summarize a scientific paper…as long as the results conform to their ideological expectations.

Here’s the short summary of what they do: they jigger the identities of the amino acids coded for by each codon into a number, a nucleon sum. What is that, you might ask? It’s determined by adding up the number of protons and neutrons in the amino acid, which is simply the mass number of the compound. Further, you can distinguish the amino acid into it’s R group, and the atoms that make up the peptide chain proper, which he calls the B group, for standard block. The mass number of the B group is always 74, except for proline, so he transfers a hydrogen from the R group to the proline B group to bring it up to 74, and by the way, did you notice that 74 is two times 37, which is a prime number? Now if you take all the three-digit decimals with identical digits (111, 222, 333…999), and sum their digits (111=3, 222=6, 333=9, etc.) you get the quotient of the number divided by…37!!!1!!

Are you impressed yet? This is simply numerology, juggling highly derived quantities that have little to do with functional properties of the molecules to come up with arbitrary numerical relationships, and then claiming that they’re somehow significant. They also play games with the sums of the mass numbers of just the R groups for certain codons, adding or subtracting the B number, finagling things until they get numbers that are evenly divisible by their magic prime number of 37, etc. It’s pure nonsense through and through.

But every once in a while, something sensible emerges out of the murk. Here’s the logic of their argument:

To be considered unambiguously as an intelligent signal, any patterns in the code must satisfy the following two criteria: (1) they must be highly significant statistically and (2) not only must they possess intelligent-like features, but they should be inconsistent in principle with any natural process, be it Darwinian or Lamarckian evolution, driven by amino acid biosynthesis, genomic changes, affinities between (anti)codons and amino acids, selection for the increased diversity of proteins, energetics of codon-anticodon interactions, or various pre-translational mechanisms.

(1) is simply saying that there must be a pattern of some sort — if the code were purely random assignment of arbitrary nucleotides to each amino acid, it wouldn’t be much of a sign — it would suggest that the sequence is noise, not signal. (2) is the really hard part, the one where you’d have to do a lot of work: you’d have to show that natural processes did not contribute to the pattern. They do not do that. They can’t do that. They take a different and curious tack.

They literally argue that because organizing the code by their nucleon sums makes no sense and has no reasonable functional consequences…therefore it must be an artificial and intentional feature. I’ve heard this argument before. It’s called the Chewbacca defense. Ladies and gentlemen, think about it: that does not make sense! If nucleon numbers show a mathematical pattern of any kind in their relationship to codons, you must accept the existence of a designer.

However, if we can show a natural property that leads to the organization of the genetic code, then I’m afraid their argument evaporates. Even more so than building an argument on the Chewbacca defense, that is.

, and I’ll briefly summarize it.

First, there is a pattern to the genetic code! No one has ever denied that; it’s obviously not the case that amino acids are randomly assigned to trios of nucleotides. Here’s the code: 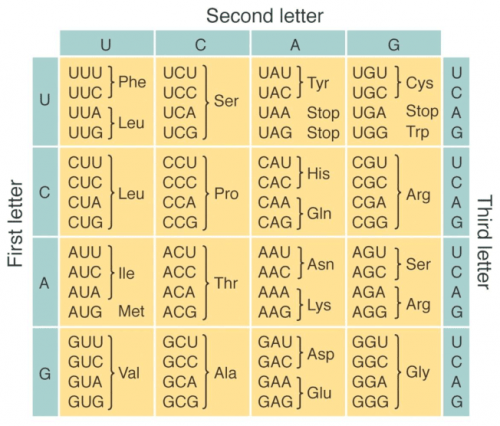 Let’s look at one amino acid, glycine (Gly), down in the bottom right corner. The genetic code is degenerate: that means that most amino acids have multiple combinations of nucleotides that can specify them. Glycine’s codes are GGU, GGC, GGA, and GGG. Do you see a pattern? The code is actually GG_, where the third position has a lot of slack or wobble, and any nucleotide will do. We see similar cases where just the first two nucleotides are sufficient to specify leucine, valine, serine, proline, threonine, alanine, and arginine. Even with the other amino acids, there are some constraints; CA_ can identify histidine or glutamine, but if the third letter is a pyrimidine (U or C), you get histidine, while if it’s a purine (A or G), you get glutamine. There are patterns all over the place here! So of course ShCherbak and Makukov could find evidence of significant organization.

But there’s more. There are other rules associated with this pattern.

In the synthesis of these amino acids, biochemistry typically modifies a raw starting material. The first letter of the codon says something about the biosynthesis of the associated amino acid.

The second letter of the codon is correlated with chemical properties of the amino acid.

It’s rather pathetic that the Discovery Institute thinks this is a beautiful piece of science. It’s not. It’s nonsense. But look how the DI spins this story:

How will evolutionists respond to this paper? It’s hard to see how they could dismiss it. Maybe they will try to mock it as old Arabian numerology, or religiously inspired (since Kazakhstan, which funded the study, is 70% Muslim). Those would be unfair criticisms. The authors have Russian names, certified doctorates, and wrote in collaboration with leading lights in the West. Or perhaps critics could argue that the authors hail from a foreign country whose name has too many adjacent consonants in it to take them seriously.

No, it appears the only way out for Darwinists would be the “Dawkins Dodge.” You may remember that one from the documentary Expelled, where Dawkins admits the possibility of panspermia for Earth, so long as the designers themselves evolved by a Darwinian process.

What’s most notable about this paper is the similarity in design reasoning between the authors and the more familiar advocates of intelligent design theory. No appeals to religion or religious texts; no identifying the designer; just logical reasoning from effect to sufficient cause. The authors even applied the “design filter” by considering chance and natural law, including natural selection, before inferring design.

If Darwinists want to go on equating intelligent design with creationism, they will now have to take on the very secular journal Icarus.

I didn’t even consider the religious or ethnic basis of this study; it didn’t come to mind at all. It is clearly simple stupid numerology, though. Look at the rationale given for all of the conclusions, which consist entirely of mathematical manipulations of arbitrary derived properties of the molecules, to arrive at a claim of prime number significance.

We certainly don’t need to invoke panspermia. Nothing in the genetic code requires design. and the authors haven’t demonstrated otherwise.

I’m also not impressed with the failure of implementation of their logic. OK, they have a ‘design filter’ that they apply, but so what? Their methods failed to recognize a well-known functional association in the genetic code; they did not rule out the operation of natural law before rushing to falsely infer design.

And that last bit…I don’t care what journal it was published in. The prestige of a journal does not confer infallibility, and even the best of journals will occasionally publish crap. They will be especially likely to publish garbage when they stretch beyond the expertise of their reviewers. Icarus is a journal of planetary science that publishes primarily on astronomy and geology. This particular paper conveniently falls between the cracks — it’s a weird paper full of trivial arithmetical manipulations for arcane purposes with no scientific justification for any of its procedures. I don’t know how it got accepted for publication, other than by boring the reviewers with its incomprehensible digit fiddling.

One last thing: don’t rush to claim a secular purpose behind this work. It’s already been appropriated by freaky strange religious fanatics and lovers of the bible codes. You can’t blame shCherbak directly for this weirdo’s interpretations, but certainly he isn’t far from his temperament.

The facts presented on this site, when combined with those now revealed to us by shCherbak, constitute invincible evidence of the truth of the Judeo-Christian Scriptures, and of the Being and Sovereignty of their Divine Author.

Yeah, numerology. Nothing but wanking over tables.

Larry Moran has more — it turns out that Uncommon Descent and Cornelius Hunter also liked this paper. Flies are drawn to shit, I guess.

Happy St Patrick’s Day to you all! » « We get some suggestions!