American Atheists have put up a new set of billboards, with a “go godless” campaign theme. 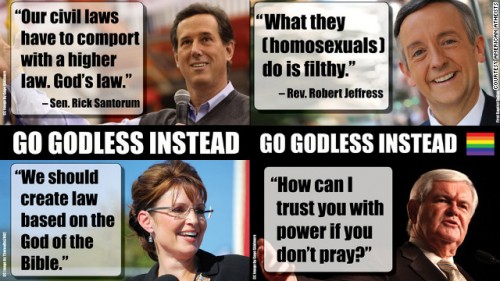 What’s interesting, though, is the media response:

Atheists ratchet up rhetoric, use billboards to attack Republican politicians

Hang on there…”Go godless instead” is ratcheting up the rhetoric? It seems like a rather mild suggestion to me — presenting an extremist religious position and then offering an alternative is an entirely reasonable approach.

As for attacking Republican politicians…has CNN noticed that the religious right has staked itself out in the Republican party? If Democrats were saying things as stupid as the Republicans, I’m sure Dave Silverman would be ripping on them just as aggressively. And if the Republicans were not basing bad policy on religious dogma, there wouldn’t be much concern about them and they wouldn’t be appearing on those billboards.