Wow. Talk about major failure. A new study out correlates levels of Foxp2 with levels of vocalization in rats: basically, male rats squeak more than female pups when they’re stressed by separation from their mothers, and mothers tend to rescue the rat who squeaks the loudest. They then found higher levels of Foxp2 in males, and also found that reducing male Foxp2 levels in male pups with siRNA also reduced vocalizations. So far, so good; looks like a reasonable and interesting experiment. Then they extended it to humans half-assedly, finding that 4 year old boys have lower levels of Foxp2 in their left hemisphere (the side that largely controls speech) than 4 year old girls; they could not do the siRNA experiment in human children, obviously.

And that’s where it goes so, so wrong. The researchers assumed that women talk more than men, four-year old girls have more Foxp2, therefore their results conform neatly to what they observed in rats.

You know all the times that men complain about women talking too much? Apparently there’s a biological explanation for the reason why women are chattier than men. Scientists have discovered that women possess higher levels of a "language protein" in their brains, which could explain why females are so talkative.

Previous research has shown that women talk almost three times as much as men. In fact, an average woman notches up 20,000 words in a day, which is about 13,000 more than the average man. In addition, women generally speak more quickly and devote more brainpower to speaking. Yet before now, researchers haven’t been able to biologically explain why this is the case.

The only problem here is that that statistic is false, and men and women talk at about the same rate. Oops. 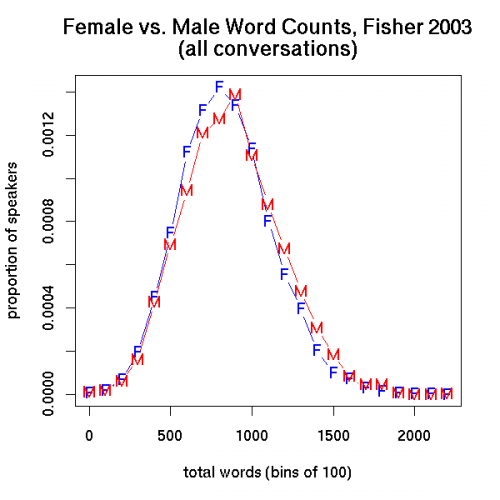 This is so unfortunate. There is evidence that girls on average learn to talk a little earlier than boys, and that would have been a safer correlation, especially since they’re describing different levels in young children. That interpretation is still fraught, though: they haven’t worked out cause and effect, they know nothing about how Foxp2 mediates this vocalization difference (and we don’t even know if it’s a direct effect on vocalization; it could also modulate a stress response), and in humans, we don’t know if different socialization pressures could be causing differences in the expression of this gene.

This is why scientists are supposed to be cautious in their interpretations. Especially when trying to explain human behavior, there’s far too much temptation to push the results to fit stereotypes as a kind of unconscious validation.