Look at her, exposing all that skin and smiling enticingly, tempting every man she meets. 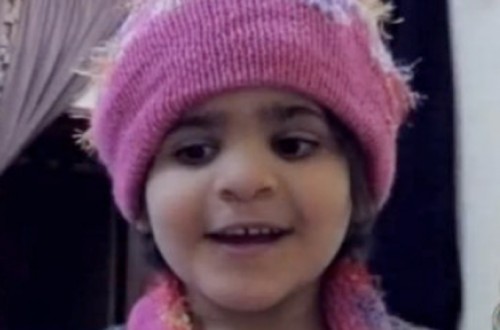 About a year ago, her father, Fayhan Ghamdi, had concerns about her virginity — are you surprised? Look at her! — and brought her in for a medical examination. I guess she didn’t pass to his satisfaction, because he took her home and beat her.

The man, said to be a religious scholar who is also a regular guest on Islamic television networks, confessed to having used cables and a cane to inflict the injuries, activists from the group Women to Drive said in a statement on Saturday.

Lamia was admitted to hospital on December 25, 2011, with multiple injuries, including a crushed skull, broken ribs and left arm, extensive bruising and burns, the activists said.

Also,”she had been raped ‘everywhere'” — it’s reported that her “rectum had been torn open and the abuser had attempted to burn it closed” (horrific injury whited out; select it if you must see it, otherwise…not for the sensitive). All this was done by her devout father who was concerned about her purity.

The father was arrested. (“I should hope so!” is what you’re thinking.)

Lama, the little girl, died of her injuries about 10 months later.

This was in Saudi Arabia, where they have laws that “a father cannot be executed for murdering his children, nor can husbands be executed for murdering their wives”. So the death penalty was off the table, which is a good thing as far as I’m concerned, and I just wish it were an expression of humanity rather than a special exception for men, with women otherwise getting their heads chopped off for lesser offenses.

Unfortunately, a month after the child died and less than a year after the brutal beating and torture that led to her death…

The judge ruled that the “blood money and the time the defendant had served in prison since Lama’s death suffices as punishment,” activists reported.

She was five years old. He got less than a year in prison for her torture-rape-murder.

I have to wonder…is the oil really worth it?

But of course Maryam has been all over this story, and reports that the Saudi royal family has stepped in to demand more prison time.

Mighty fine lawyers down there in Kentucky » « Today an egg, tomorrow the world!