When I visited the Creation “Museum”, one thing that shocked me was this display: 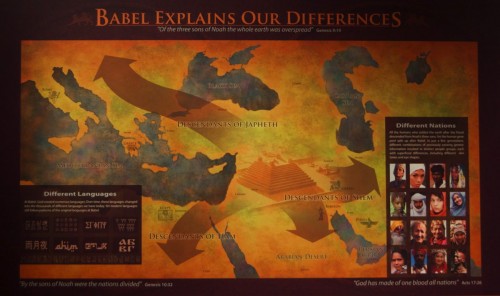 At the time, I pointed out the pernicious nature of this claim:

With complete seriousness and no awareness of the historical abuses to which this idea has been put, they were promoting the Hamite theory of racial origins, that ugly idea that all races stemmed from the children of Noah, and that black people in particular were the cursed offspring of Ham. If they are going to reject science because of its abuses, such as eugenics, they should at least be conscious of the evils perpetrated in the name of their strange cultish doctrines, I should think.

Boy oh boy, let me tell you…Ken Ham was indignant and outraged. How dare we connect creationism to racism? He was claiming that all races were one, descended from a common ancestor, Noah, 4000 years ago! Of course, what he neglects to mention is that the Biblical story claims that Africans are the product of a curse of servility placed on Ham and all of his descendants.

Well, and he also neglects to mention that the story is totally bogus, disproven by modern evidence, and has no relationship at all to the patterns of migration in human history.

And just now people are taking notice. Schools in Texas are taking advantage of creationist curricula to incorporate instruction in racism into the schools. This is an actual image from one of the creationist textbooks.

And this is what Texas schoolkids are being taught.

Would you believe that they also teach that the Jews killed Jesus? Of course you would.