The Discovery Institute released a video of one of their stars, Ann Gauger, explaining the flaws in “population genetics” (I put it in quotes because it wasn’t a description of the field of population genetics that any competent biologist would recognize). Larry Moran points out the errors.

But then, someone noticed something else: the video was fake. It was Ann Gauger, all right, talking in a “lab”. Again, the quotes are because she was actually talking in front of a green screen, and a stock photo of a lab was spliced in behind her. Oops. It adds comic absurdity on top of the egregious errors in her babbling.

But of course that’s exactly what the DI wants. They can’t answer for the stupidity of her comments, but they can wave their hands and shout, “We do too have a lab! A real lab! And it’s sciencey and everything!” Because, after all, when you’re doing cargo cult science, the props are all important, and the substance doesn’t matter.

So, yeah, the indignant DI released a real photo of their real lab, with Gauger gazing at a petri dish. And here it is:

Errm, are we supposed to be impressed? I could give you an equivalent photo of a few shelves in one of our student labs — it would look similar, just messier. A petri dish, a few orange-top bottles, a small hood in the background—all they needed to make it really sciencey were a few bubbling bottles of colored water. D. James Kennedy did a better job in “Darwin’s Deadly Legacy”. 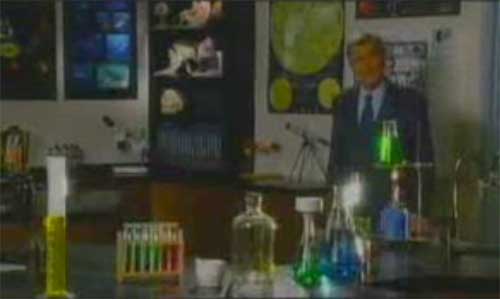 But seriously, the furniture does not make the lab — the work being done in it does. When you think it matters that you can pose with a petri dish, you really are doing cargo cult science.

Which god, I wonder? » « The total cultural solution