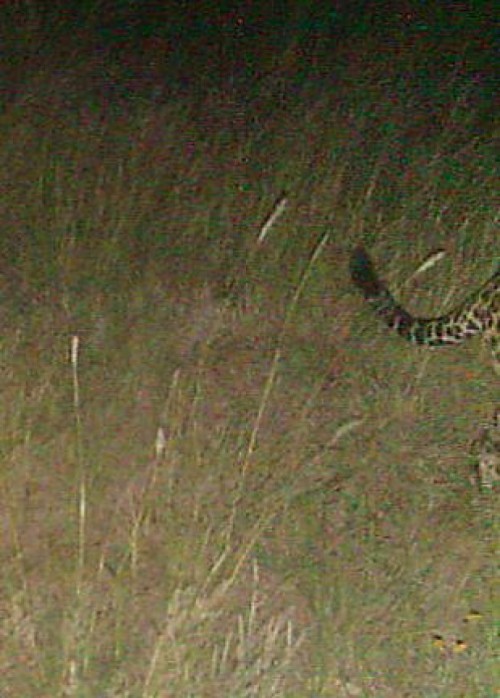 And therein hangs a tail.

The Arizona Game and Fish Department released a camera trap photo this past week that shows what Game and Fish has officially decided is a jaguar, or at least the last bit of one, in the Santa Rita Mountains southeast of Tucson, Arizona. The photo was captured in September.

This is big news for a couple reasons. The jaguar, North America’s largest cat, has been more or less extirpated from Arizona and New Mexico, which were part of the species’ historic range. (As was much of the southern US, a couple hundred years ago, from California to Texas, with vagrants wandering as far east as North Carolina.) But there’s a population of the cats centered in Northern Mexico about 140 miles south of the border from which individual males have been found heading to El Norte every now and then. (No females have been found in the US since the species’ rediscovery in the states in 1996.)

Naturally, wildlife protection folks are thrilled every time it seems as though a formerly native big predator might be making a comeback, and jaguars are no exception. The conservation group Center for Biological Diversity sued the US Fish and Wildlife Service a few times starting in 2003 to force the agency to designate critical habitat for the cat, which would provide a meager amount of protection to lands the jaguar might possibly use in the US. This past summer the Feds actually did designate some critical habitat for the jaguar, more than 830,000 acres of it in six chunks across the mountains of southern Arizona and New Mexico. (The area works out to just under 3,400 square kilometers for those of you in the civilized world.)

(Also for those of you in the civilized world: it’s pronounced either “ha-guar,” as the Sonorans do, or “dzha-guar,” like Western U.S. gringos do.  The three-syllable “dzha-gyew-are” pronunciation is ridiculous and decadent and you should stop it immediately.)

6,990 acres of land in that critical habitat is set to be gouged out and blasted away as part of the proposed and controversial Rosemont Copper Mine in the Santa Ritas. Another 138,000 acres or so is expected to be significantly impacted by mining activites, including noise, dust, traffic, and things like leachate. Understandably, there’s controversy over whether a large copper mine is really the right use for habitat deemed critical for the survival of an endangered species, especially when the region has existing mines that are just waiting for a rise in the price of copper to become economically viable again.

The U.S. Forest Service announced a couple of weeks ago that it wasn’t going to meet an informal December goal for releasing the Final Environmental Impact Statement for the Rosemont Mine project. That may be, in part because — as the scuttlebutt has it — the cat tail photo reposted above was apparently taken right on the edge of what would be come the mine’s pit. I can imagine that would throw a wrench into the document preparation.

Of course, as big and troubling as the mine is, there are a couple larger issues facing the jaguars of Arizona and New Mexico. Roaming males do not a viable population make. The jaguar’s core Northern Mexican populations in Sonora and Jalisco are in better shape, but they’re not without threats from ranching, development, and hunting. And if those populations are protected sufficiently, and we manage to establish protected habitat up north for them to wander into, there’s the small issue of the 1,951-mile fence some yahoos have decided we need running between San Diego and Brownsville, Texas.

This isn’t the only recent prominent jaguar sighting in the area. Not far from where the above cat tail was photographed, a male jaguar — dubbed Macho B — was captured in 2009 in a foothold snare set for bears and pumas, then radio-collared and released by AZ Game and Fish workers. Game and Fish maintains the capture was accidental, though subsequent investigation by the Interior Department’s Office of the Inspector General found that may not have been precisely accurate. A few days after his capture and release Macho B stopped moving. He was located and recaptured, brought to a zoo veterinarian and euthanized after vets determined his kidneys had failed. Macho B was between 16 and 20 years old, pretty old for a wild jaguar, and the investigation linked above suggests that he may have had chronic kidney disease that was worsened by his breaking a canine about when he was captured. The OIG report concluded that Macho B’s initial capture was probably deliberate and certainly illegal. Game and Fish rejects the report’s conclusions, predictably. The documents are sad reading whichever side you believe.

Macho B just after his first capture. RIP.