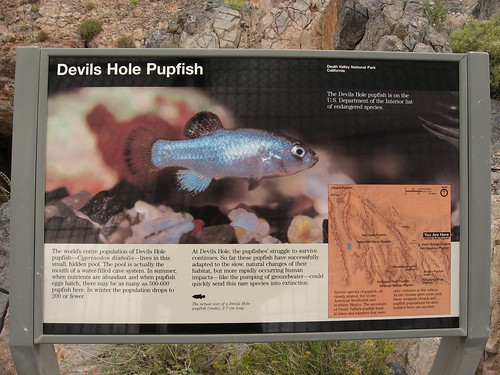 Hilary Rosner has an interesting piece at Wired Science on the campaign to keep the critically endangered Devils Hole pupfish from going extinct.

Background: during the Pluvial period there were a lot of occasionally interconnected lakes in the American southwest, and some of those lakes had little fish in them of what we’d later call genus Cyprinodon. Climate changed, the desert dried up, and desert Cyprinodons found themselves restricted to smaller and smaller bodies of water in the desert. Predictably, speciation occurred when populations were separated, and now five species live in the little bits of remaining fresh and not-so-fresh water in the desert.

Cyprinodon is a cosmopolitan genus, and many of its member species are doing okay, but desert Cyprinodons are having a tough time, as you might expect of freshwater fish in the desert. The Devils Hole pupfish, Cyprinodon diabolus, is facing the biggest threat of all: its only remaining natural habitat is Devils Hole with no apostrophe, a geothermal spring (92°F/33°C) in a limestone cave in Nevada, with the breeding habitat of the entire species limited to a small rock shelf just beneath the surface of the water. A century of groundwater pumping for agriculture has made that habitat even more tenuous. The fish live a year, and there’s a significant seasonal population crash each winter when less light means less algae. In September, according to Rosner, the global population of Devils Hole pupfish dropped from its usual level in the mid-100s to about 75 individuals.

Rosner’s got a pretty good rundown of the politics involved, though she stumbles a bit in her handling of the definition of “species”:

Martin wants to cross two separate species. That’s supposed to be a no-no. In fact, by one definition of what constitutes a species, it shouldn’t even be possible. Scientists have long thought of species as reproductively isolated units. In the days before Darwin, if two animals couldn’t produce fertile offspring, it meant they were different species. Then things got complicated.… But it turns out that biology doesn’t even adhere to those categories. For example, the ability to reproduce can evolve far more slowly than other traits. So when one species branches off from another, it may still be able to breed with its relatives up the evolutionary tree. “It raises the question, what really is a species? It’s very hard to clearly articulate,” says M. Sanjayan, lead scientist for the Nature Conservancy. “There are lots of things that can breed together but look morphologically and genetically different.” That means scientists triaging endangered species might have more options than they thought.

Rosner seems to be saying that wildlife biologists are largely unaware of the vagaries inherent in applying the Biological Species Concept to real life, which would be news to any of the biologists I’ve met working in the desert. A species is a rough, somewhat arbitrary pigeonhole that we lean on because we want there to be a Basic Unit of Biodiversity. Biologists working in the field to help conserve that biodiversity end up improvising to fill in the gaps in the species concept. For management purposes, species are subdivided into subspecies, varieties, Evolutionarily Significant Units, Recovery Units, and probably half a dozen other terms of convenience I’m forgetting.

All those categories and subcategories are at least partially subjective ways of parceling out a flood of organisms into relevant family groups. Due to those subjectivities, one person’s revitalizing a genetically depauperate fish population with a sibling stock is another’s swamping a native population with an invasive exotic fish species.

As Rosner points out, the issue is relevant beyond the steep walls of Devils Hole. I spent the weekend at a meeting of the Sierra Club Desert Committee, listening to activists and agency staff give updates on regional environmental issues, and one of those updates was on plans by the US Fish and Wildlife Service to start depopulating the controversial Desert Tortoise Conservation Center. There are about 2,700 tortoises at the center south of Las Vegas, most of them collected in the years when Vegas was busily sprawling out into the desert, but a substantial minority consisting of surrendered pets and their offspring. The Center, which is run by the San Diego Zoo, is overrun with torts. Before the San Diego Zoo took over management a few years back, there were so many tortoises there and such poor veterinary management that some desert wildlife biologists referred to the place as the Desert Tortoise Concentration Camp. Everyone I’ve talked to about the place says the Zoo has made things a lot better. Still, taking care of three thousand torts is expensive, so the Center wants to release some of the healthier ones into what it deems appropriate places: 17 wilderness areas, five wilderness study areas and other  land in Nevada, including a stretch of land in the northern Ivanpah Valley that’s already had 9,000 tortoises relocated there.

Tortoises have recently been split out into two species, one for each side of the Colorado River. Within the western species there’s a whole lot of regional genetic diversity, unsurprising for a long-lived, slow-moving species that prefers not to migrate far from its home territory. Tortoises in Southern Nevada have a fair bit of genetic distinctness from those in California’s Colorado Desert, and they’re both distinct from torts in the West Mojave near Los Angeles. Historic attempts to translocate tortoises from one place to another have been done with those genetics in mind, for the most part.

That seems to be a thing of the past, though. The USFWS representative at the meeting pointed out that the resources aren’t there to scrutinize each released tortoise’s genome; apparently, the Center’s answer is to eyeball each tortoise and figure out whether each one looks Nevadan. Problem is, many of those surrendered pet tortoises might well have come from the extreme western edge of the species’ range, several Recovery Units away. Records are lacking.

So like with the Devils Hole pupfish and its neighboring cousins, the question becomes: to what degree do we preserve the local native genome of a population? It’s very likely that local populations of tortoises have some traits that serve to help the animals contend with local conditions, but other traits may well be a fluke of inheritance. Where do we draw the line?