I spend a lot of time paying attention to threats to the organisms that live in the desert, and what with all the environmental bad news available online these days that can be pretty damned depressing. This past weekend, though, I was reminded that there is actually hope for the future. Centuries from now we may well find that desert plants, especially those that now live within a day’s drive of Los Angeles, have a vital role to play in making yet-undiscovered planets habitable.

I was reminded of this while re-watching a set of documentary films describing the terraforming of an entire complex system full of dozens of more or less habitable planets, in many cases using entire vegetative suites once native to the California desert. I’ve gone back and taken some screenshots of these films to illustrate some of the ways in which the terraformers used desert plants, and they — along with discussion of the terraformed vegetation –are below the fold. 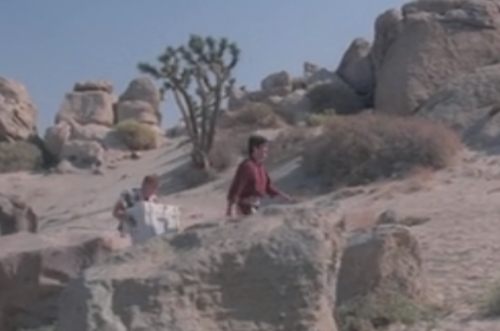 Here we see a typical planet in the system, unnamed as far as I could tell from the documentaries, with a classic Neo-Mojavean vegetative scheme. Joshua trees and what would appear to be a sparse understory of Ambrosia dumosa are clearly well on their way to stabilizing the planet’s soil, and it’s obvious from the unsuited figures in mid-foreground that they’ve done a good job of oxygenating the atmosphere as well.

On planets with a relatively low partial pressure of water vapor, the advantage of desert plants is pretty obvious. If that blurry low shrub is indeed Ambrosia dumosa, a.k.a. burrofat, it’s a good coice: it’s one of those plants that uses the efficient, water-conserving C4 photosynthesis which allows plants to keep their stomata closed during the day. The Joshua tree is a C3 plant, but it’s adapted to grow more quickly in cooler temperatures, which sidesteps some of the need to conserve water. C4 plants are quite eficient at sequestering carbon, and their use on this planet suggests its initial condition may have been a Venus-like greenhouse planet.

Absence of dark desert pavement on the rocks indicates that the granite boulders are actively exfoliating, not giving the slow patina a chance to develop. This implies that the soil in the area should be pretty fertile due to decomposed granite, giving us hope for long-term survival of the desert plants being used here. 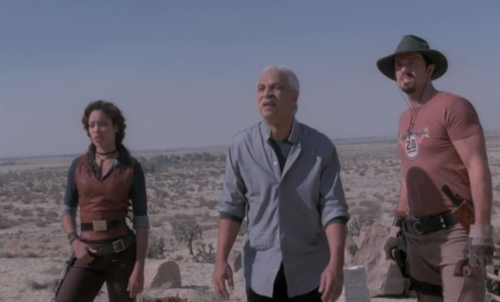 This screen capture from a later visit to the same unnamed planet shows that the terraformers here didn’t limit their repertoire to Joshua trees and burrofat. That’s quite clearly a plain of creosote bush (Larrea tridentata) in the background, with what appears to be something very like a row of cottonwoods just below the horizon, possibly a biological component of a sewage treatment facility.

Other, somewhat less arid planets in the system seem to have been designed using a mix of desert plants and species from the California chaparral biome. In this screen capture from a visit to a planet the documentary series refers to as “Whitefall,” the light vertical stripes between the two people in the foreground are dead flower stalks of Hesperoyucca whipplei, a rosette succulent very common in California’s coastal mountains which bears the unfortunate-for-this-venue common name of Our Lord’s Candle. There’s what looks to be a healthy clump of chamise, Adenostoma fasciculatum, near the male figure’s shoulder, and the grayish rounded shrubs in the background may well be a mix of chamise and a few Californian salvias. The abundant brown vegetation suggests this planet has a strongly seasonal rainfall pattern. It also suggests that the planet’s vegetation may well be managed with periodic wildfires, a likely strategy for planets whose atmospheric carbon balance needs constant fine-tuning. Perhaps this planet’s oceans were seeded with a too-efficient strain of reef-forming coral that threatens to remove too much carbon from the atmosphere. Hard to say from the limited footage we have. 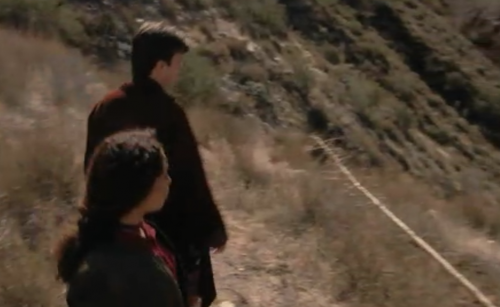 Here’s a much closer view of a Hesperoyucca flower stalk, emerging into the frame from lower right.

And a live, and in fact exuberant, rosette of Hesperoyucca peeking out from behind the figure in the center. The view past the rosette is of a dry, steep-sided  canyon filled with alluvium, which indicates a tectonically active planet whose ranges are rising faster than Whitefall’s seasonal storms can erode them.

One last screen capture from the series, from another planet that has no mention of a name I could find: 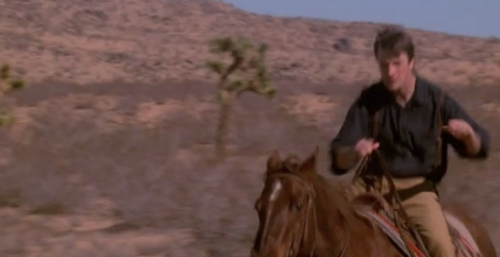 Again, we see a crew of terraformers has opted for Joshua trees as a canopy species, with what looks like creosote bush as an understory.

It may be that the terraformers’ choices of vegetation reflect some degree of fashion as well as functionality, in much the same way that settlers attempted to “Europiform” the perfectly well-vegetated North American and Australian continents as a way of making themselves more comfortable in a seemingly exotic landscape. That might account for the prevalence of Californian aridland vegetation over, say, similarly adapted South African species — though I’m given to understand some consider Australian flora suitable for pressure-dome greenhouse settings.

The one thing I can’t figure out, though, is the presence of California junipers — the low-growing, dark green shrubs — in the unrelated bit of reportage from an uncharted planet embedded below. How did the same species develop both on Earth and on this distant, poorly documented planet? Convergent evolution must be the reason, though a less skeptical person might be tempted to suggest some kind of California desert panspermia as an answer.