In a meeting Mitt Romney had with a gang of millionaires, one class traitor dared to secretly record his words…and then turn the recording over to that pinko commie rag, Mother Jones. Mitt Romney unleashed is a thing to behold, the plutocratic beast revealed.

There are 47 percent of the people who will vote for the president no matter what. All right, there are 47 percent who are with him, who are dependent upon government, who believe that they are victims, who believe the government has a responsibility to care for them, who believe that they are entitled to health care, to food, to housing, to you-name-it. That that’s an entitlement. And the government should give it to them. And they will vote for this president no matter what…These are people who pay no income tax.

You know, I think Mitt Romney paid a much, much smaller percentage of his income in taxes than I did last year, or the year before, or the year before that. Who is the moocher here? Who isn’t doing his fair share to support the American government?

There’s much more at the link, and more to come…the magazine is trickling out the juicy stuff. Here’s their summary:

Here was Romney raw and unplugged—sort of unscripted. With this crowd of fellow millionaires, he apparently felt free to utter what he really believes and would never dare say out in the open. He displayed a high degree of disgust for nearly half of his fellow citizens, lumping all Obama voters into a mass of shiftless moochers who don’t contribute much, if anything, to society, and he indicated that he viewed the election as a battle between strivers (such as himself and the donors before him) and parasitic free-riders who lack character, fortitude, and initiative. Yet Romney explained to his patrons that he could not speak such harsh words about Obama in public, lest he insult those independent voters who sided with Obama in 2008 and whom he desperately needs in this election. These were sentiments not to be shared with the voters; it was inside information, available only to the select few who had paid for the privilege of experiencing the real Romney.

It ought to demolish his campaign.

It won’t. The Republican faithful will all delude themselves into thinking they all belong to his club of millionaires, or that they will be, once the mighty Rethugs get power and sweep away all those obstacles to their ascendance, like taxes and black and brown people and all those damn foreigners.

Wondering where all those moochers live? Oh, look: a map. 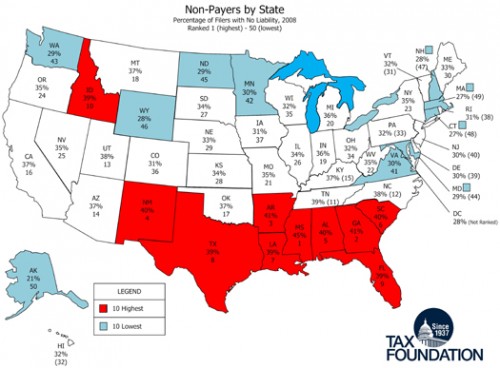 Hey, isn’t that the Republican base?

Why I am an atheist – Mitchell Hayden » « Mark your calendars, desert folks