I am getting quite impressed with the progress being made in organ reconstruction. New techniques have allowed amazing improvements in bioengineering that allow whole complex organs to be grown in a dish and then surgically reimplanted — and much of this research is being driven by our military ventures, which provide a steady supply of scarred, damaged, and mutilated veterans who need new body parts. There I read that scientists are developing procedures to regrow penises…how could I not look up that paper? So I did, and now I have the current recipe for building new penises — or at least, corpora cavernosa — in a lab.

It’s got limitations. First, you have to start with an intact penis, preferably from a dead body. Then it has to be delicately decellularized, leaving behind a fragile, ghostly collagen matrix, the connective tissue ‘skeleton’ of the organ. This framework is completely acellular, with no remnants of the donor’s cells, and consisting of just the collagen matrix, so that it will not provoke an immune response.

Then smooth muscle and endothelial cells are harvested by biopsies from the prospective host. This is to be an autologous transplant, a regrown organ built from the host’s own cells, again so immune system rejection will not be an issue. These cells are seeded in multiple steps onto the collagen scaffold, where they proliferate and infiltrate the matrix and reassemble (you hope!) the fully functional organ.

Note the limitations, though: you have to start with a penis. There are relatively few of those to spare, although since histocompatibility matching isn’t an issue, it ought to be doable as part of an organ donor program — we’ll just grab the penis as well as the corneas and kidneys. This procedure does not regrow the entire penis, but just the spongy erectile tissue in the core; this is implanted into the sheath of skin of the normal penis. I know all you body modification fans are dreaming of the day you can have multiple penises, but this isn’t quite there yet, and sorry, I should hope injured people who need the procedure get priority over cosmetic uses.

But here’s the astonishing thing: it works. The procedure has only been tested in rabbits so far, but with amazing success. I know what you are saying. You are saying, “Really? Then show me the bunny penises, with erections.” And I will.

At the top left is an unaltered, unoperated rabbit penis; top right is the case we’re interested in, a rabbit with an implanted, bioengineered penis (say, isn’t it a little larger than the unaltered penis?). At the bottom are negative controls, penises with just the unseeded collagen matrix implanted and with nothing at all to replace the surgical deletion. 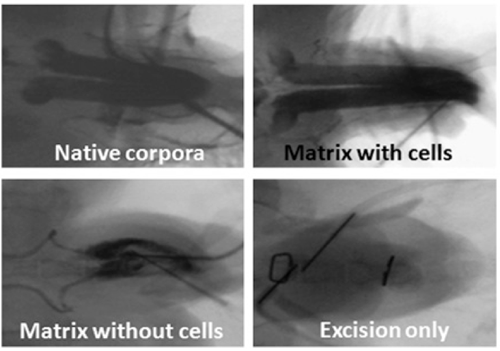 Cavernosometry and cavernosography. (A) Cavernosometry shows that all rabbits implanted with the bioengineered corpora after complete pendular penile corporal excision had sufficient intracorporal pressure (ICP) to attain erection (n = 12). The levels of ICP were comparable to native corpora (n = 12). (B) Cavernosography shows a homogenous appearance of corpora in the bioengineered group (n = 12), similar to the native corpora (n = 16), numerous filling defects in the unseeded control group (n = 12), and major filling gaps in the negative control group (n = 3).

The researchers have done experiments in rabbits in which they compare a positive control group (no removal of the corpora) to a negative control group (rabbits with their penises hollowed out and the corpora removed — sad bunnies) to an experimental group (rabbits with their penises surgically cored out, and then replaced with bioengineered neocorpora), and look what happened.

The experimental and control animals were each placed with a female rabbit and mating activities were assessed at 1, 3, and 6 months after implantation. All rabbits with bioengineered neocorpora attempted copulation within 1 min of introduction to their female partners, and this occurred as early as 1 month after implantation. Most control rabbits did not attempt copulation after introduction to their female partners.

The rabbits were ready and eager to try out their new penises! Yay science!

And it wasn’t all just for fun, those penises worked, they successfully inseminated the females, and, typical bunnies, a third of the females were impregnated! Yay science again!

A difference between experimental and control group without cells in the intravaginal ejaculation rates of 75% was noted, with a 95% confidence interval of 36% to 89%. For the negative control group (excision only), all vaginal swabs were negative, and none of the females were impregnated (0%).

I feel sad for those bunnies with their flaccid, hollowed out penises, but I guess that is the expected result — it would have been far more surprising if the negative controls had inseminated their partners.

The bottom line is that we need more stem cell research and more bioengineering. There are wonders to be accomplished! And don’t let religious nonsense interfere with this kind of work. 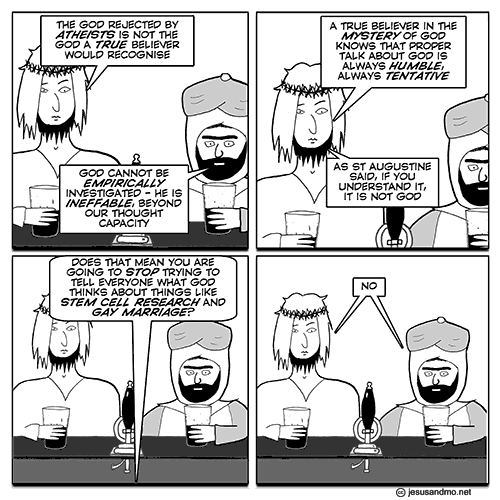 Although, to be fair, both Islam and Christianity would be perfectly fine with reconstruction of the holy penis — it’s only when it steps into the task of reconstructing scarred and damaged vulvas that it treads over the line into abomination.

Tom Holland is censored » « Why I am an atheist – Helen Nicholls