Gregory Paul has been looking at trends in the International Social Survey Program (ISSP) and other polling data. We’re behind in some countries (I’m looking at you, USA), ahead in others, but the overall trend is good: atheism is winning out around the world. 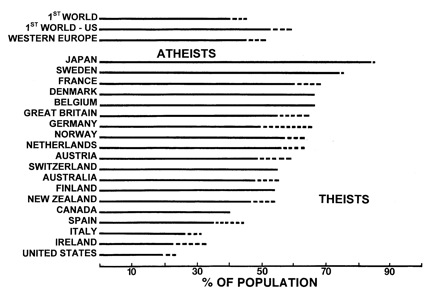 (Note: These are predominantly ISSP results. Solid lines indicate atheists from absolutist to marginal, empty spaces to the right are theists from marginal to absolutist, and results for western and eastern Germany are combined proportional to their populations. Differences between the 1998 and 2008 ISSP results are indicated by dashed segments.)

It appears that Ameroatheists have expanded by 10 million since the turn of the century—representing about a million a year, and about a third of overall population growth, to a total of 60 million out of more than 300 million. Atheism has made large gains among the young, while congregation size has dropped by as much as a fifth. Even so, the ISSP results confirm that the United States is still the most theistic prosperous democracy—yet not nearly as theistic as some Second and Third World countries.

A multinational waxing of atheism and waning of theism seems to be occurring, and may well be universal in Western countries. The increase in Western atheism appears to be continuing a long-term trend that probably started in the 1800s, if not earlier, and has accelerated since World War II with no signs of slowing down, if the ISSP results are correct. Losses in theism have occurred in both Protestant and Catholic nations, albeit with the latter somewhat more resistant to losses. In most Western nations, the religious right is already weak, and in the few where it is a strong minority, it is losing ground. Demographically driven by a growing loss of piety among youth, the rise of secularism in the advanced democracies is in accord with the socioeconomic dysfunctionality hypothesis that predicts and observes that improving levels of financial and economic security in middle class majorities strongly suppresses interest in supernatural deities.

That last bit is what worries me. Atheism thrives on economic stability; religion prospers when people are desperate and ignorant. Here in the US, the theocratic party, the Republicans, have no interest in keeping the majority in good economic shape — they’d like to destroy the social safety net and increase economic inequity. I see an awfully strong correlation there between religiosity and economy-wrecking.

The thesis that popular secularism is dead, or at least dying, is clearly false. In the most advanced and successful nations, it is religion that is in the demographic ICU. Also entirely discredited is the premise that religion is universal to the human condition, like language—while theists vary from constituting nearly entire populations to less than a third, verbal skills are nearly uniform across the board. Demographic extrapolations that suggest fast-reproducing fundamentalists are on a statistical course to outgrow low-fertility secularists are proving flawed because they fail to account for mass nonchalant conversion due to modernity.

Yes! I have never been concerned about all the people moaning about how the fundies and Muslims are outbreeding us — I see them as busily making minds that will be ripe for reason and knowledge.

Douchebag rising » « Why I am an atheist – Christopher Bonds