Last week, I gave a talk at UNLV titled “A counter-revolutionary history of evo devo”, and I’m afraid I was a little bit heretical. I criticized my favorite discipline. I felt guilty the whole time, but I think it’s a good idea to occasionally step back and think about where we’re going and where we should be going. It’s also part of some rethinking I’ve been doing lately about a more appropriate kind of research I could be doing at my institution, and what I want to be doing in the next ten years. And yes, I want to be doing evo devo, so even though I’m bringing up what I see as shortcomings I still see it as an important field.

I think of myself as primarily a developmental biologist, someone who focuses on processes in embryos and is most interested molecular mechanisms that generate form and physiology. But I’m also into evolution, obviously, and recently have been trying to educate myself on ecology. And this is where the conflicts arise. Historically, there has been a little disaffection between evolution and development, and we can trace it right back to Richard Goldschmidt and the neo-Darwinian synthesis.

There is minimal consideration of development in the synthesis. The big man in the interdisciplinary study of evolution and development at the time of the formulation of the synthesis was Goldschmidt, who actually raised some grand and important issues. He was interested in sex differences; the same genome can give rise to very different forms, male and female. He was interested in metamorphosis; the same genome produces both a caterpillar and an adult moth. And he was interested in phenocopies; the same genome can generate alternative forms under the influence of environmental factors. He had some very speculative ideas about global systemic mutations that haven’t really panned out, and his ideas were tarred with the label “hopeful monsters”, which didn’t help either. It was non-Darwinian! It argued for abrupt transitions! I’ll defer to Gould’s defense of Goldschmidt, though, and would say that those weren’t good reasons to reject some challenging ideas.

The charge that stung, though, was Ernst Mayr’s accusation that Goldschmidt believed that new species could arise by a single fortuitous macromutation in a single individual, that Goldschmidt had abandoned or failed to grasp one of the most essential principles of evolutionary thought: that evolution occurs in populations, not individuals. He did not understand the concept of population thinking. I don’t think he was entirely guilty of that, but I have to concede that there was a disjoint there: as a developmental biologist, Goldschmidt would wonder first and foremost about the kinds of genetic rearrangements that would generate an evolutionary novelty, and just assume that a superior morph would propagate through the population, a process of relatively little interest; while an evolutionary biologist would be less interested in the developmental details of the generation of the phenotype, and much more interested in the mechanics and probabilities of its spread through a population.

Evolutionary biologists and developmental biologists think differently, and that creates a conflict between the evo and the devo. I’m not unique in noting this: Rudy Raff included a table in his book, The Shape of Life, which I’ll reproduce here, with a few modifications of my own.

Those different emphases can lead to biases in where we place the importance of various processes. I’ll focus on just two: causality and variation.

When we’re looking at the process of change within our domains, evolutionary biologists have already mastered the art of population thinking: everything is about propagation of patterns of variation within a population. There aren’t explicit mechanisms that generate subtypes to fit the range of roles available. Instead, a cloud of forms is created by chance variation and the unfit are selected out. Developmental biologists, on the other hand, see an organism with a constellation of necessary and dedicated functions — there must be a nervous system to regulate behavior, there must be a gut to process food — and specific molecular mechanisms to programmatically generate them. Embryos do not proliferate a mass of cells with random variants, and then use the ones that secrete digestive enzymes for the gut and the ones that generate electrical impulses for the brain. A lot of development papers really do talk about nothing but proximate sequences of causal interactions that lead to a specific function or fate.

To an evolutionary biologist, variation is the stuff of interest: populations with no variation are not evolving (it’s a good thing such populations don’t exist, or if they do, chance will swiftly change the situation). To your average developmental biologist, variation is noise. It clutters the interpretation of the data. We want to say, “Here is the mechanism that produces this tissue type,” not “Here is the mechanism that sometimes produces this tissue type, in some organisms, sometimes with other mechanisms X, Y, and Z.” We generally love model systems because they allow us to establish an archetype and see a reliable pattern. In the best case, it gives us a solid foundation to work from; in the worst case, we forget altogether that there is more complexity in the natural world than is found in our labs. I would be the first to admit that laboratory zebrafish, for instance, are tremendously weird, inbred, specialized creatures…but they’re still extraordinarily useful for getting clean results.

I will also be quick to admit that the above is a bit of a caricature. Of course many developmental biologists reach out beyond the simplistic reduction of everything to linear, proximate causes. Raff, in that book, goes on to discuss specifically all of the problems of model systems and how they distort our understanding of biology; I could cite researchers like David Kingsley who specifically study variation in natural populations; Ecological Developmental Biology, which describes the interactions between genes and environment; and of course there are all those scientists at marine stations who aren’t staring at tanks full of inbred specimens, but are going out and collecting diverse forms in the wild. I am admitting a bias, but the best of us work hard to overcome it.

And then…we sometimes slip. I highly recommend Sean B. Carroll’s Endless Forms Most Beautiful: The New Science of Evo Devo as an excellent introduction to evo devo, I even use it in my developmental biology course. In reducing the discipline to a popular science book, you can see what had to be jettisoned, though, and unfortunately, it’s that whole business of population thinking and environmental influences (clearly, Carroll knows all that stuff, but in distilling evo devo down to the basics, that developmental bias is what emerges most clearly). Here, for instance, is the admittedly sound-bitey one sentence summary of what evo devo is from the book:

Again, this is not a criticism of the book, which does what it does very well, that is, describe the mechanistic process of development and the regulatory logic behind it, but notice the missing words in that abbreviated description: populations and environments don’t really come into play. All we’ve got there (and this is a bit unfair to Carroll) is comparisons of genes between species, which is enough to show common descent and relationships between the phyla, but it doesn’t say how they got that way — which is an unfortunate deficiency for a discipline that is all about how things get that way!

That’s what I’m concerned about. Right now, evo devo is far more devo than evo; we really need to absorb some more lessons from our colleagues in evolutionary biology. A more balanced evo devo would weight variation far more heavily, would be far more interested in diversity within and between populations, and would prioritize plasticity and environmental influences far more. If we did all that, it wouldn’t be a revolution — because it would embrace everything that is already in evolution — but would be what Pigliucci calls the Extended Evolutionary Synthesis. What we’d have is a better appreciation of this well-known aphorism:

“Evolution is the control of development by ecology…”

That’s the holy trinity of biology: evolution, ecology, development. Our goal ought to be to bring all three together in one beautiful balance. 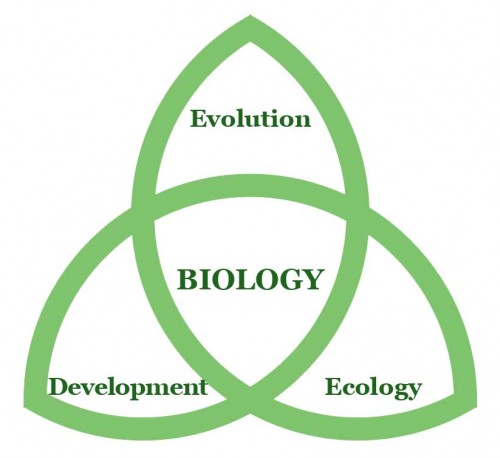 (Yeah, I stole the triquetra. We’ll use it far more wisely than the religious.)

Perspective » « Why I am an atheist – Nathaniel Logee