Remember how Indiana managed to get a creationist bill through their Education committee? Crank up the dread, dismay, and disgust another notch: it has now passed the Indiana Senate, and is awaiting the approval of the house.

This is the bill that tries to avoid accusations of sectarian religious teaching by encouraging science classes to teach “Christianity, Judaism, Islam, Hinduism, Buddhism and Scientology”. They really don’t get it. None of them are science, and they shouldn’t be taught as if they were. 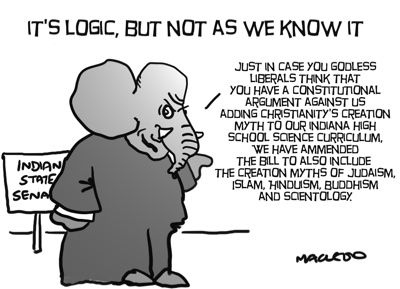 …and South Dakota follows suit » « Yessss…come over to the Dark Side!