Week after week, Jesus & Mo keeps plugging along with its sacrilegious portrayal of Jesus Christ and Mohammed as a pair of oblivious lunkheads, and there have been no fatwahs, no beheadings, no riots. It doesn’t seem right.

Now at last there has been a little protest: University College London is having a censorship fight over the use of Jesus & Mo by the Atheist, Secularist, and Humanist Society. It’s much more polite than a riot, at least, but just as stupid.

The Ahmadiyya Muslim Students Association is protesting. Apparently, once you’ve been informed that a group of deluded idjits finds your signage offensive, you’re supposed to immediately take it down and apologize.

Once a particular act is deemed to be offensive to another, it is only good manners to refrain from, at the very least, repeating that act. In this particular case, when at first the cartoon was uploaded, it could have been mistaken as unintentional offense. When certain Muslims voiced their offense over the issue, for any civil, well-mannered individual or group of individuals, it should then be a question as to the feelings of others and the cartoons should then have been removed

Gosh, who knew? I find the inanity of Christian announcements deeply offensive, and all I have to do is go down to the local churches and ask them politely to stop expressing their views in public, and the church bells will stop ringing, the electronic chimes will cease blaring, they’ll stop putting up advertisements for Kent Hovind video showings at the university, and they’ll stop airing insipid church services on the local public television station. I look forward to our new era of tolerance, civility, and public respect for the views of atheists. 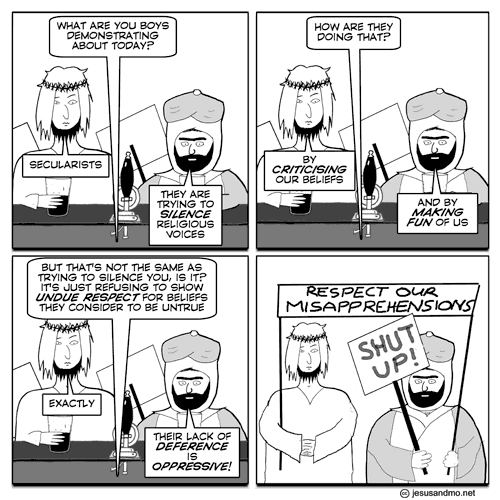 They keep taking the excuses away! » « Assessing the American education system