The Templeton Foundation has found another way to throw money at universities: they are supporting a study of spirituality in space, whatever that means. The University of Central Florida is getting $300,000 to build a rocketship simulator, in which subjects will apparently sit and go “Ooooooh, aaaah”.

To perform the experiment, they will build a virtual space lab to simulate a space flight with the help of the Bildakt Research Group in Berlin. The simulation will try to replicate those spiritual experiences among astronauts.

The team will also analyze astronauts’ reports using a software program developed at the University of Memphis.

The team’s hypothesis is that the spiritual experiences described by astronauts are primarily caused by the various views of the earth and the vastness of space.

No duh. What are the alternative hypotheses? What results would support or disprove their hypothesis? How are they going to measure “spirituality”? Their proposal sounds murky from this summary, and it also sounds remarkably like they’re going to be looking at natural processes — so why confuse the issue with ambiguous words like “spirit”?

What they don’t realize is that in this project, UCF is the experimental subject, the Templeton Foundation is the experimenter, the $300,000 is the unconditional stimulus, and they are trying to make “spirituality” the conditional stimulus that causes university administrators to start drooling. The only way to succeed is to wake up and realize how they’re being manipulated.

Oh, well. We already know what result they’ll get. 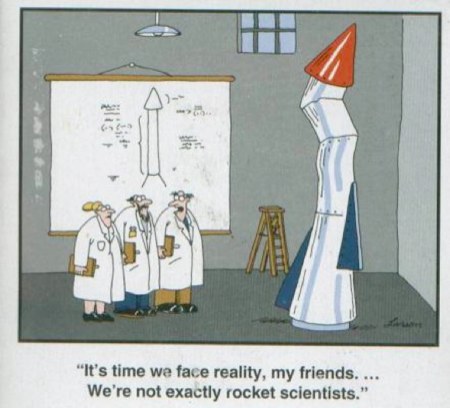 They’re eating their own! » « That student from hell