He calls Mormonism a “truly American faith”. I don’t think Brown actually knows anything about the Mormons other than the whitewash they’ve been given in their efforts to become more mainstream.

Mormonism is detested by some American evangelicals because it is “not Christianity” – but perhaps more because it is the first, great, truly American religion. It is founded on claims that no outsider can take seriously, but validated by one of the greatest epics of the settlement of the west, and secured by prosperity and tithing. 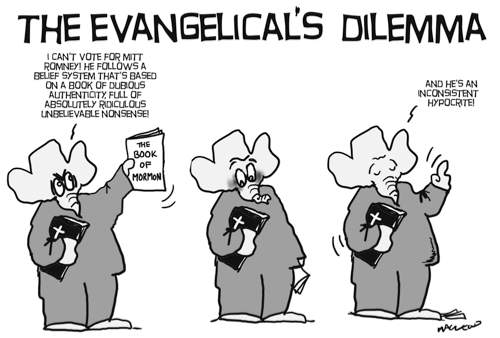 I might appreciate it more if it weren’t Christianity, but it is — it’s taken the worst elements of Christianity and amplified them. And what’s this about the “greatest epics of the settlement of the west”? Has Brown mistaken Hollywood for reality? It was a mob of militant fanatics led by charismatic con artists who aimed to establish their own misogynistic fiefdom far, far away from the interference of the government. Brown might want to look up the Mountain Meadows Massacre — there’s a mighty example of Mormon heroism. Salt Lake City was founded as Jonestown without the Koolaid.

In the course of the 20th century, the Mormons, however, became mainstream. This has little to do with theology. What marks a cult out is not its beliefs, but its distance from the surrounding society.

Modern public Mormons are almost parodically conformist and technocratic. The public image of Mitt Romney is not of a man who holds strange beliefs that he will act on if elected, but the opposite – a man who has no principles whatsoever, and almost no personality. Abstinent, frugal, hard-working and rich, the Mormons have moved from the fringe of American life to its centre – not least because their religion is so intensely American. Whether or not it’s crazy, it has worked.

“Cult” is a problematic word, but Brown has found an escape hatch: any religion, no matter how insane, stops being a cult when it hits a certain critical mass. Content has no meaning, all we care about is how many people adhere to its principles.

This is a cute maneuver, but it means we’re lacking a useful word. We need a word to describe the content of a belief system, which can be used to categorize the ones that require dedication to an unbelievable, typically ridiculous set of ideas that lead its members to practices that are pointless or self-destructive. Hmm…what word could we use?

I suggest “religion”. They’re all crazy. In that sense, Mormonism is no worse than any of the others.

And then Rod Dreher takes up the call and response. Dreher plus Brown? I’m so glad my lab has an eyewash.

Anyway, it is especially offensive, at least to me, to hear Christians speak of Mormonism as a “cult.” Usually when you hear that word being applied to a church or religious group, it’s designed not to describe, but solely to marginalize. Was it Tom Wolfe who said that a “cult” is a religious group without political power? That’s mostly right. I think cults really do exist, and can be identified in part by their overweening desire to be secretive and controlling of their adherents — e.g., Scientology. (It should be noted that one can find cultish behavior within mainstream religions too.) But I think the Guardian blogger Andrew Brown is more or less correct when he says that a “cult” can be defined sociologically as being far from a society’s mainstream — though by that definition, one would have to call the Amish a “cult,” and maybe even cloistered Catholic and Orthodox monks and nuns a “cult”?

Anybody want to do that? Anybody? Didn’t think so. So why so hard on the Mormons? Especially given that it’s hard to find a more idealistically American group of people anywhere in this country.

<PZ raises his hand> I would! Heck, I have problems with the Unitarians. They’re all pushing nonsense, and in the case of the Amish and cloistered fanatics, it’s led them to deny human beings participation in the wider interests of humanity.

In my experience, Mormonism produces exemplary people, the kind who form stable families and strong communities, and who make good neighbors. I do not believe in Mormonism, nor do I have the slightest interest in becoming Mormon. That Mormons tend to be good people does not make their doctrines true. But inasmuch as Mormons — and I’m generalizing here — tend to produce people who are often better Christians, in terms of their behavior, than the more orthodox expressions within the Christian tradition, should make thoughtful Christians consider what truth may exist within Mormonism. and what we may learn about how to live well from the Mormon experience.

No. People produce exemplary people. Does Dreher really want to imply that Catholics or atheists or Buddhists make poorer neighbors than Mormons? And what is this about Mormons being “better Christians”? If he means more conservative, more homophobic, more hypocritical, and more misogynistic, well then, I guess he’s right. But I don’t consider those to be virtues.

I lived among the Mormons for 7 years. I know that they’re perfectly ordinary people with peculiar beliefs…but beliefs that are no stranger than the peculiar nonsense I find endemic to Minnesota, or Washington, or Oregon, or Pennsylvania, or Indiana, or any of the other places I’ve lived.

But let’s not pretend Mormonism is just fine because its believers manage to routinely transcend its absurdities. Mormons may well be good people, but they’d be better people if they could purge their brains of the raging idiocy of their religion.

An irrefutable argument » « Last call for the FIG 20th Anniversary