The Christian Science Monitor has just posted an article titled “As an American Muslim, I am disgusted by the 9/11 coloring book“. It’s hard to believe someone considered this pile of violent jingo to be an appropriate subject for a kid’s coloring book.

“We Shall Never Forget 9/11: The Kids’ Book of Freedom,” was just released by Wayne Bell, publisher of Really Big Coloring Books Inc. in St. Louis. It begins with big graphic black-and-white drawings of bin Laden plotting the 9/11 attacks, then shows the burning towers, the hunt for bin Laden, and ends with a Navy SEAL shooting bin Laden as he hides behind a woman in Islamic garb. 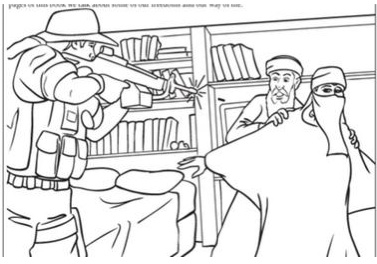 Being the elusive character that he was, and after hiding out with his terrorist buddies in Pakistan and Afghanistan, American soldiers finally locate the terrorist leader Osama bin Laden. Children, the truth is, these terrorist acts were done by freedom-hating radical Islamic Muslim extremists. These crazy people hate the American way of life because we are FREE and our society is FREE.

Remember, kids, if you draw the effect of those bullets hitting the bad man, use your Scarlet crayola if you think there should be arterial spray!

You know, I think I’m disgusted by this as a human being; it doesn’t matter what your beliefs about religion are, this is simply the glorification of bloody violence.