This is a ranking system, and I have mostly a hyper-competitive American audience, so you all want to know whether you win or not, right? You want the data that shows that the US is #1! And here it is, the one result that shows us at the top of the ladder, our average health care as a function of GDP. 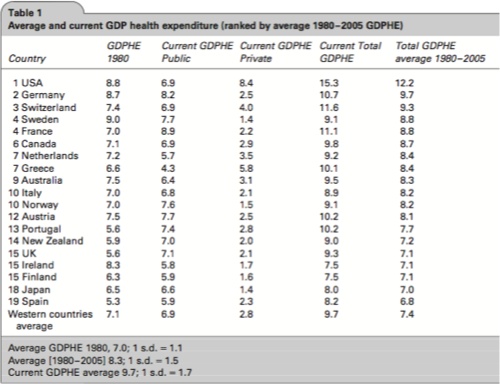 Look at that: we don’t just win, we win big, leaving our closest competitor, Germany, in the dust. We spend 125% of the money Germany does per person. Does it feel good, America? We are tossing bigger buckets of money into health care than anyone else.

But now for the number that really matters, the GDPHE ratio. How many lives are we saving with all that money? Here’s the answer. Look at the last column, which is the ratio of money spent to lives saved. 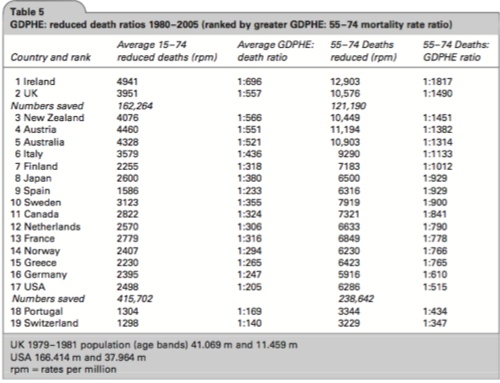 Oops. We’re…#17. We’re almost the worst — thanks, Portugal and Switzerland, for neglecting the medical needs of your citizenry more than we do.

Our health care is miserably inefficient, and we pour extravagant sums of cash into it, but you might ask whether it works at all. And the answer is a bit of good news, yes, it does. This study also compared death rates over time and came to the conclusion that, in the US, more than half a million people are alive today who would not have been with the medical care we offered 25 years ago. Medicine in the US is good, it’s just far more economically wasteful than it ought to be.

I’m still thinking I ought to retire to Ireland.