7 feels like a significant number. It’s been an interesting ride so far, and there’s no question that it’s made my life better. Both Tegan and I were in long-term relationships prior to us getting together, so there’s a degree to which you could say this is a “second marriage” for both of us, and I think that’s been for the best. We both had a better idea going into it what we wanted from a relationship, as well as some pretty clear notions of why our past relationships hadn’t worked. In that regard, I highly recommend having relationships prior to marriage, as well as living with someone before legally binding yourself to them, and making that emotional commitment. 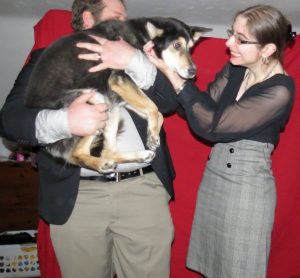 The image shows me and Tegan standing in front of a red background (I don’t remember what it is or why it’s there). I am holding Raksha, a German Shepard/Husky mix, in my arms. Tegan is petting Raksha. Raksha is very worried about everything going on, but too polite to object. Tegan’s wearing a gray checkered skirt with buttons on the front and a black top with sheer sleeves, and I’m wearing slacks, a shirt and jacket, and a lot of dog hair.

Raksha was not a fan of our wedding photos. Facebook notified me of this “memory” today, and it was… bittersweet. I scooped Raksha up in a moment of exuberance right after taking mostly the same picture with Erwin, the ill-fated cat whose heart gave out after only a couple years of life. His death was unexpected and upsetting, but the poor guy just didn’t have time to become a part of me the way Raksha did, and the way His Holiness has. Some days I still have to remind myself that no, I don’t need to check on the dog, or let her out anymore. Thankfully, I’ve had Tegan to share the ups and downs, and to help me through the hard times, as I try to help her.

See, if the other person’s good enough for you, then they’ll look out for your wellbeing, and do things like periodically gifting you with free time, and you will, of course reciprocate, based on your partner’s needs. And on that note, Tegan suggested, an I think she’s right, that I take a little time off. Specifically, I’m not posting for the first week in January. This has been my most productive year as a writer by far, and while there’s a good chance I’ll keep working on the blog during my time off, that’ll be to build myself a bit more of a “cushion” for days when I can’t get anything finished, or I need to do something else.

Life can be hard, and I’m glad I have someone like Tegan on my side. Saying “yes” was definitely the right call!

If you want to help us have another good 7 years, please share this blog with other people (maybe not this post, specifically), and consider signing to throw us a few pennies a day at patreon.com/oceanoxia. I don’t have a lot of benefits beyond having the means to message me directly (and get a response), but if you sign up for $5/month or above, you get to name a character in whatever novel I’m currently working on (some conditions apply). Right now that’s a subversive sword-and-sorcery epic, with an array of magical and non-magical people, places, and creatures.

The horrors of mass incarceration demand abolition. » « The U.S. is about to freeze. Stay warm, and help others if you can!