So, I’m also quite the Ghostbusters fan. I saw the first two films probably about ten times each, owned the toys, watched the TV shows. A few years ago, I rewatched both and bought the video game (which was scripted by Aykroyd and Ramis, serving as the official third part of the Gozer trilogy).

In other words, I’m a really big fan of this franchise.

I was really excited about a third film. Then Murray showed hesitation. Then Ramis died. Then we heard rumours that it would star only women. And then, yesterday, it was kinda-sorta confirmed.

Via The Hollywood Reporter:

Melissa McCarthy, who was already in talks for one of the leads, has signed on for the Paul Feig-directed reboot, and Sony is now negotiating with Kristen Wiig as well as Saturday Night Live players Leslie Jones and Kate McKinnon, The Hollywood Reporter has learned.

Negotiations are ongoing, but the quartet are expected to sign on as the specter-seeking, poltergeist-punishing, phantom-phollowing foursome in the reboot, which is eyeing a summer shoot in New York.

Of course, you may notice an issue that always upsets the internet: Women. Yeah. Women and their… existence. The Internet and humanity doesn’t seem particularly happy.

Amy O’Connor, from The Daily Edge, noticed some not very friendly responses. (I’ve blocked out the users’ names for ethical reasons.) 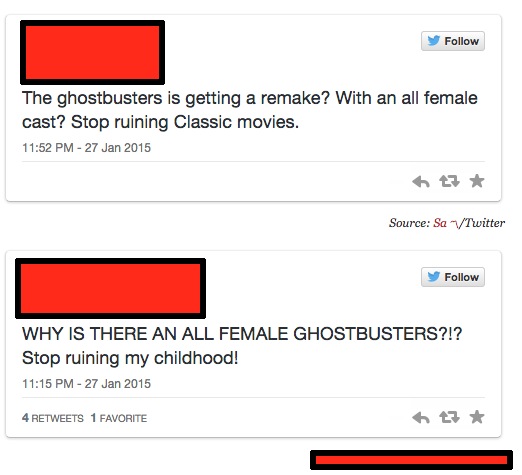 Of course, a person’s weight and your opinion about their looks determines the brilliance of an entire film and performance. 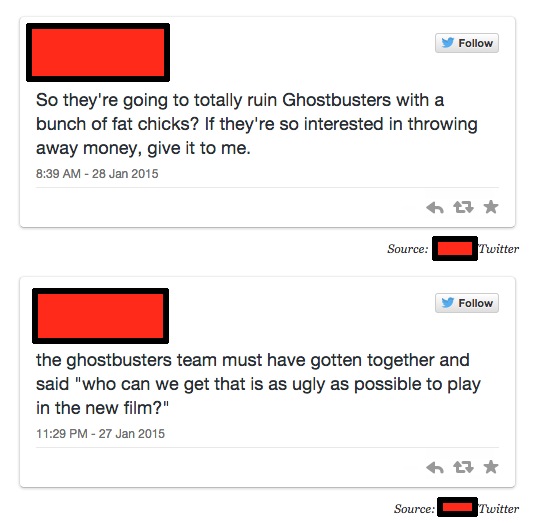 Importantly, brave men pointed out the biological fact – sorry “fact” – that women aren’t funny.  I think all those hormones and barefoot kitchen walking from sandwich making gets in the way? I’m not sure. 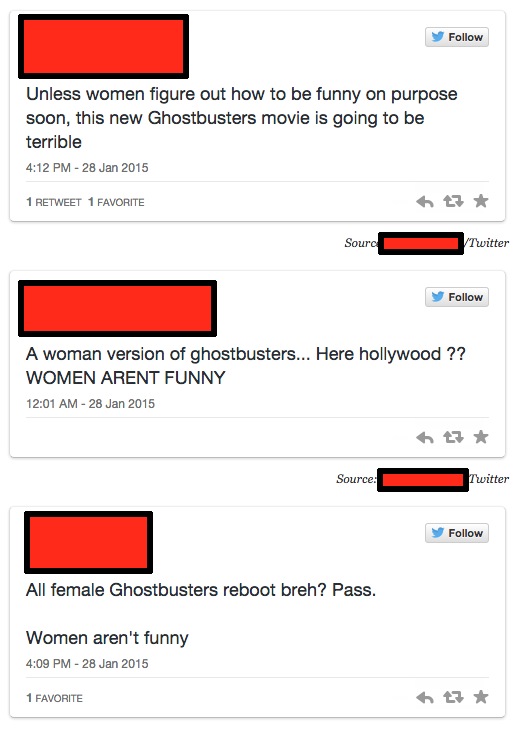 (HT Amy O’Connor for getting these)

So, men. Men who have an “issue” with women being Ghostbusters… the new Ghostbusters. I have some questions and points.

1. What do you mean by “ruining” your childhood?

I still have moments of nostalgia; the video game in particular uses the same soundtrack, ghosts and, of course, original cast. It felt wonderful. Better yet, I got to watch the first two films in kinda HD. They’ve made my childhood better! Those things still exist.

I’m not sure how you think reboots or new films in a franchise works, but just because this is being made differently to the previous one, doesn’t make those films or memories disappear. If you truly loved and adored your time with Ghostbusters, how can anyone take that away from you?

tbh if a movie is an integral part of your childhood and you grew up to become a manbaby, i'd argue that is a great reason to destroy it

Have you looked at that cast? Seriously: look at it. Those are some of the most talented, funny people in Hollywood. Ask yourself, if they’d chosen funny – or “funny” – white dudes, would you be kicking up as much of a fuss? Oh, oh, yeah: I know. You’re not sexist, you’ve got a loving wife, you adore your mother, etc. You just don’t think any of those four women are funny – even though professional casting, directors, scripters, and, er, millions of fans disagree.

But think deeply about your visceral reaction and why you think “women aren’t as funny as men”. Do you have any good, scientific justification for that?

One of the most brilliant men I ever read, who changed my life, tried to drown his readership in words in an attempt to justify this sexist view – and it only confirmed that he was a sexist, except a sexist who could waste my time. If he can’t do it, I’m not sure you can.

Being a good person to the women in your life doesn’t make you immune to sexism, only blind to it. Don’t pretend this is anything other than a lame attempt to gatekeep women. At least have the decency to be honest about you just not liking, just being uncomfortable, with the fact it’s women. I respect that more than nitpicking, boring “she’s just not as funny as… <insert boring white male comedian #4,533>”.

The men who react like this to an all-female Ghostbusters look exactly the same as as a Saudi man reacting to a woman driving. It’s foolish, it’s gross, it’s unhelpful: it does nothing for us as men, conveys a horrid attitude to women and contributes to a system beautifully designed to tell women the world lives under a sign of “No Girls Allowed”.

I don’t and don’t want to live under that sign. I’m tired of signs telling me which kinds of people are and aren’t allowed. I lived in that kind of country, literally. We abandoned that in the early 90’s. Come on men, we can do better.

One of the things ruining childhoods isn’t an all-female Ghostbusters; it’s whiny men’s refusal to grow the fuck up.

@tauriqmoosa parts of the script have leaked and it's already every man's nightmare. pic.twitter.com/2PMrp6qy2z

Bros are not happy with Men’s Magazines getting rid of pick-up artist bullshit » « What progress looks like: Men’s magazine wants to purge itself of Pick Up Artist bullshit