So a few days ago, a friend of mine made fun of me for writing for our local Men’s Health, on how men need to care about everyday sexism. He showed me a post they published about to “how to get a girl’s number”. I read and Tweeted about it.

http://t.co/6NtuFKip1o Eh @MensHealthZA has some tips for getting a woman's number & once again I think such "advice" is a little creepy.

As almost always, these sorts of articles come off as creepy blatant or glorified pick-up artist bullshit. I explained a little.

See, it's this sort of antagonism which I don't like. pic.twitter.com/Vu9VIC82QF

@tauriqmoosa You're right. That article IS classic PUA bullshit. We're wrong and we're taking it down.

@tauriqmoosa In fact we'd like to purge our archives totally of the PUA taint. Dating advice is fine. Manipulation is not.

I found this to be fantastic, as did (almost) everyone who saw the Tweet – including South Africa’s biggest women’s site.

Awesome RT @MensHealthZA: @tauriqmoosa We'd like to purge our archives totally of the PUA taint. Dating advice is fine. Manipulation is not.

Applause to @MensHealthZA for taking anti-PUA stance. We'd date YOU just the way you are, without tricks and manipulation. You rock, guys.

Men’s Health chose to do this; no hand was forced. For them, indeed, it was in keeping with what they’re trying to do.

We are into health, in the larger sense of the word. Having a manipulative pick-up artist mentality is not healthy. For anybody.

I did nothing except Tweet my concern: I had no influence on this decision. All responsibility – whether for praise or blame – must go to MH itself and this ethical editorial decision. Indeed, they recognised my point when they replied to a hyperbolic “nanny state” concern. 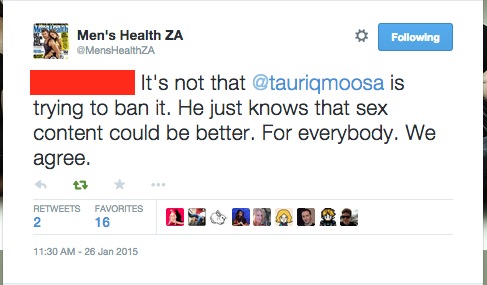 Don’t know about you, but even this small ray of hope is something to at least be glad about in an otherwise shitty, shitty year – that’s only just begun.

PART II: I respond to a dude who’s not very happy about this.

To the men “concerned” about the new Ghostbusters that happen to star women » « Should we mock people who use virtual girlfriend services?