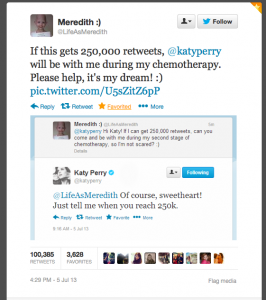 I’ve been even more sensitive to quick, knee-jerk reactions to stories and claims – especially those that occur via social media – thanks to reading an incredible book, No Time to Think. I’ll be saying a bit more about it when I’ve finished it. For now, let’s examine the Twitter-powered custard pumping android that, apparently, (and falsely) is Katy Perry.Two things.

1. Notice the timestamp on Miss Perry’s response (in the pic.twitter.com url – strange that it’s not a proper Twitter url, eh?). If you go to her Twitter timeline, itself, you would’ve seen this. 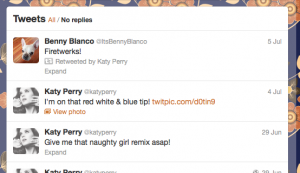 Notice she didn’t even have any Tweets on the 5 July (just a Retweet). It didn’t exist in her Timeline. True, she could’ve deleted it, but that doesn’t seem likely. Also, I’m sure you’re aware of being able to do things like this.

I’m wasn’t aware of who Ms Tisdale was until I made this, but I can assure you that she does not feel this way about me. Here’s the very dangerous website that allows you to make such fake Tweets.

2. Why would a celebrity base their actions on Tweet numbers? Would Katy Perry really NOT visit a girl getting cancer treatment because not enough people clicked a button? I don’t know Katy Perry, but that seems unlikely. Twitter-powered celebrities might be an interesting sci-fi scenario for a writer to use – hello, Charlie Brooker! – but, for now, remains a poor justification for action.

Of course, these “If I get x of RT’s, y will happen” are indistinguishable from all manner of attention-sapping scams. “Pass these on or someone you know will die!” “Send to five friends or something bad will happen” (Notice how they all actually sounded quite threatening. Imagine if a creepy person who you didn’t know sent them).

Attention is a resource. We must use it carefully. Twitter makes it all too easy to retweet articles that are false, perpetuate rumours and speculation unverified by proper channels. For example, the recent unfortunate plane crash in San Francisco mostly “broke” on Twitter and rumours were sprouting faster than verified fact. It’s easy to RT in outrage, to @ someone in fury, but perhaps wait a few moments at least to think whether this rumour, this speculation, this accusation, this claim is true. If it’s possible, don’t RT, don’t add to what is – for the moment – noise rather than signal. We could make matters worse by giving volume to outrage and speculation, rather than reality, which is what those actually affected could use.

Girl raped, needs life-saving abortion, but can’t because every life is sacred. Um. Wait. » « Why ‘The Last of Us’ still sticks with me