1. Via Stephanie, new and fascinating pain research out of Stanford.

Neuroimaging studies from several different labs examining diverse types of pain offer tantalizing clues. They all show that chronic pain patients have stronger connections among brain regions involved in pain perception and processing, as well as losses in gray matter in those areas and perturbations in brain chemistry compared to healthy individuals.

These changes are so profound and consistent that a computer can be trained to spot chronic pain patients by their brain scans alone. In 2011, Mackey’s team demonstrated just that. They taught a computer to recognize the brain activity pattern of a person experiencing acute pain. In 2012, they extended the work to chronic pain. When they fed structural MRI pictures from patients with lower back pain and healthy controls into a computer, it was able to distinguish these groups with 76 percent accuracy, based largely on gray matter changes.

Working with colleagues at Lucas, Mackey, who has a PhD in electrical engineering, also perfected a technique to obtain functional imaging scans of the spinal cord (tricky because the spine shifts with every breath). At a 2013 conference, his team presented preliminary evidence of amped-up connections in the spinal cord—which is responsible not only for routing messages to the brain but for sending inhibitory signals back to the body—that may play a role in chronic pain.

3. Genetic Russian Roulette (and read the comments, too, for some discussion of Sudbury Schools)

4. The words you use matter. We’ve known for a while about how much self-report can be skewed, but in clinical interview settings, it’s particularly important to talk so people can understand you.

5. Nightmares as a problematic and intrusive symptom of PTSD, and techniques for treating them.

6. And speaking of nightmares, here’s a comprehensive-but-readable roundup of the research. 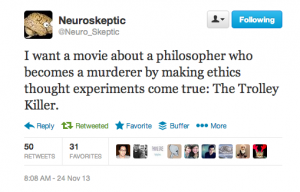 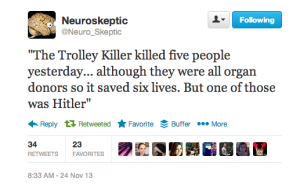 8. I know everyone’s going to be bowled over in shock, but an actual longitudinal study in the UK found that videogames don’t seem to measurably change kids’ behavior.

9. On teaching consent to children. I post versions of “teach kids to honor and expect consent-based ethics!” posts pretty regularly, but it’s an important enough idea to bear repeating.

I cannot express how important it was to actively practice saying “No” and “Stop” forcefully. I’m not going to lie: I thought the playful ‘Smiley-No’ was kinda fun. I’m not sure how I got the idea that saying “no” when I actually mean “yes” was fun. Does that idea come from ambient social-messaging, or some sort of natural impulse? I doubt I will ever know. But for my brother, the playful ‘No’ was indistinguishable from the serious ‘No’ so long as I still had a smile on my face.

There are plenty of reasons why someone (females in particular) would present a ‘Smiley-No’ when they seriously mean ‘No’. In fact, it’s totally natural to smile and laugh when afraid as a form of appeasement. There’s even a catchy name for this behavior; its called ‘tend and befriend‘. Additionally, females are socialized from a young age to suppress their voices, to be soft- spoken, and not-be-forceful in general.

Whether the tendency to give a ‘Smiley-No’ when we are truly frightened comes from nature or nurture, the fact that it’s so ingrained is all the more reason to actively break the habit by practicing.

10. I’m breaking my own rule about only posting linking to things I think are worth rereading and sharing, but how could I not link to something that contains these arguments?

The secular case for polyamory will go something like this: If it’s legal to be right handed, and legal to be left handed, then it should be legal to be ambidextrous.

11. So I’ve said this several times now, but go read Worm. I can’t say you won’t regret it–it will certainly suck you in and eat up your free time, but it will be SO WORTH IT.

Like Loading...
Monday Miscellany: Forensic Psychology, Fighting, & Replicating Research » « In Which Scary Things Happened, Decisions Were Made, And I Didn’t Blog