FtB hasn’t been very hoppin’ lately, so you may be seeking something to read.  Last time I noted this, I came up with a list of good articles I’d written that received little attention at the time I posted them.  You could revisit that, if you didn’t avail yourself the first time.  Something else that could be fun to read: My short-lived RP by Comment.  Cartomancer was the last man standing in that exercise in collaborative writing*, and he brought it to a very meta and amusing conclusion.  Thanks, Cartomancer.

When I was a young man*, Pepsi ran a slogan “Be young, Have fun, Drink Pepsi.”  You Could win a prize by collecting cans that were printed in the bottom with each word of the creepy demand.  But the print inside the can was only 2-3 letters, which worked out to BE YNG HAV FUN DRK PEP.  As you survive another season of fire, invoke this ancient spell to summon Pepsiman to protect you.

BE YNG HAV FUN DRK PEP.  Now gimme the prize.

*some would say “egg” but it felt appropriate enough at that time so i let this kind of thing stand.

Some Great American Satan writing will be coming to book form soon!  There’s a compilation in which I have a few submissions, soon to be published, and if I pull off this wild last-minute dash thing I’m working on, my first novel may also come available within a week of that!  Here’s the back cover of that collection.  I’m the Bébé Mélange and none of the described scenes are from my submissions… 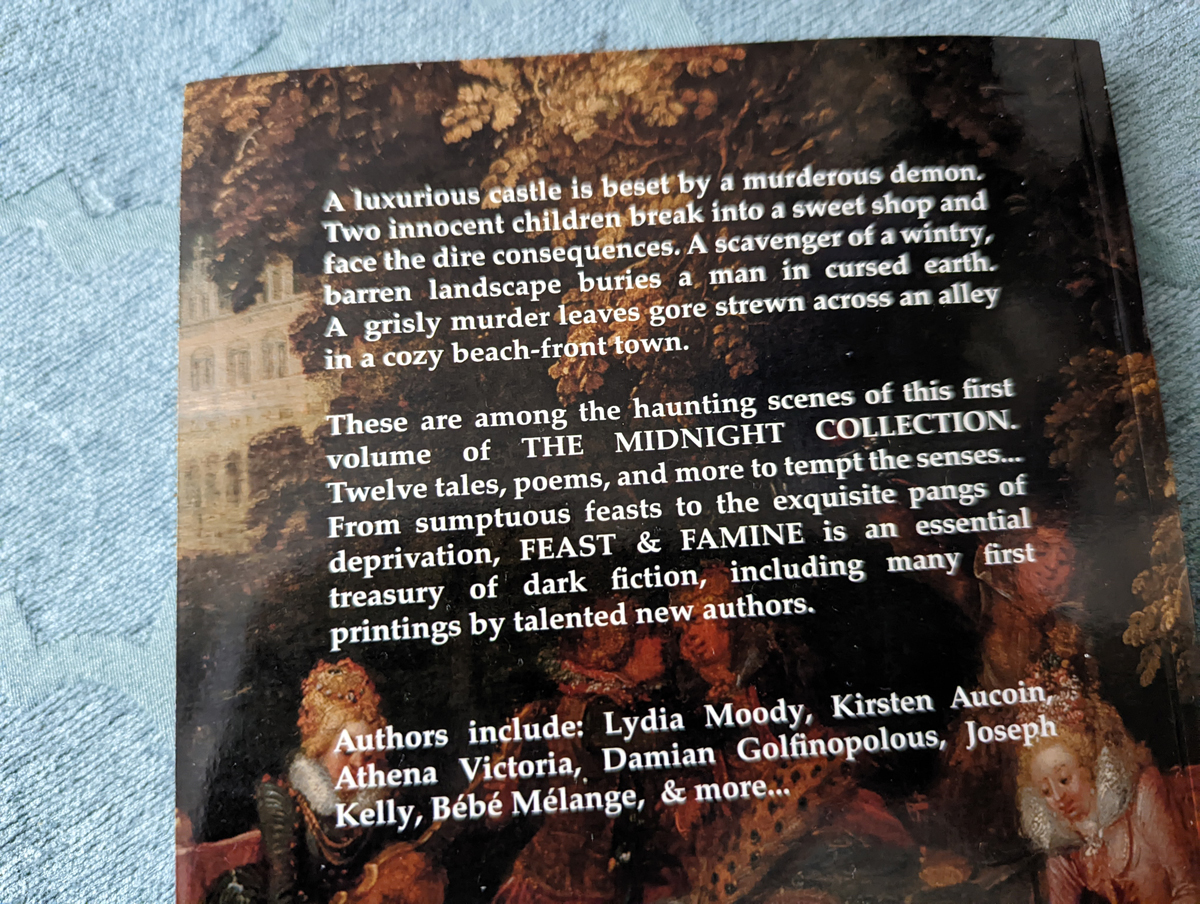 The collection is going to be sold at zero profit, but my novel – The Septagram – will involve at least some reward for me other than thronging fans.  I’ll get into that in more depth sometime within the next few weeks here.

Just in case I get hit by a bus before august of 2023 (feeling imminent bus hit vibes at the moment for reasons), I wanna do something special for my boyfriend’s birthday.  Safe to talk about it here because he only reads posts I call to his attention.  Anyway, I’d like to write him a poem, but I can’t think of an approach that feels right.

He doesn’t like to think about his corporeal existence so talk about how he physically appeals to me should probably be kept to a minimum.  I’m way out of practice being romantic because I excised most of those feelings from my head in response to some bad relationships past, and the rest bled out when age diminished my ardor (sez the 46 year old geezer).

Any poets, bards, or modern day troubadours in my audience have a notion?  A form or structure for poems you’re liking lately?  An angle for waxing poetic when inspiration is hard to pin down?  I could contemplate this guy in writing here, but he’s a private person and I’d best not.  Not sure what to say.

My spam filter was getting a bunch of bot comments advertising poaching adventures for evil whiteys.  An evil whitey who was involved in helping arrange that kind of shit was found executed gangland style in South Africa.  I’d like to think that was the work of somebody who cares about nature, but realistically it was a fellow gangster that will likely continue in the same line of business.  However, I am no longer seeing those particular comments in my spam trap.  Almost certainly a coincidence, but again, I’d like to think…

Our FtB man William Brinkman is dropping a novel for y’all this week – on July 13th, my birthday.  But I had a birthday present in June when he made a review copy available to his people.  Thanks, man.  Below the fold are some very long form thoughts I had before and during my read.  Above that, the review I’ll post wherever I have an account.

I had a good time reading this book, though I had some reservations before I started.  As soon as the adventurous part of the story began – which was pretty quickly – you could feel the author entering his comfort zone.  With all the disappointment and crap involved in Disney’s monopoly on entertainment, I’ve been hoping to see more adventurous fiction that doesn’t rely on any of their properties – in spirit, like fic with the serial numbers filed off.  And being an AMAB reader over the age of forty, post-YA wasn’t going to do it for me either.

The Rift was an entertaining high speed journey into Brinkman’s “Bolingbrook Babbler” universe, inspired by the UFO / amazing bat-boy end of the tabloid spectrum, and best of all it required no prior knowledge of his oeuvre.  We follow a character being introduced to the world of paranormal conspiracies and don’t have to choke on a bunch of references to deep lore.

This is one of those books that *needed* to be self-published because it’s too unconventional, too niche, to be sold to major publishers.  You can have a story with wild original content, but to sell that it needs to fit into some kind of recognizable mold, like surreal literary fiction or magical realism.  The Rift is genre fiction in a very functional 20th century style, without the frippery of Catherynne Valente or poetic ostentation of litfic regulars.

I’d place it in what was once called “men’s fiction” – the kind of adventure stories that once sat near the checkout stands at supermarkets, like the tabloids that provided The Rift’s milieu.  Stories about spies, war, survival, treachery.  And yet it isn’t a very comfortable fit for that genre either.  The ladies in those stories are objects and props, and this one takes pains to establish that ladies have lives and agendas wholly independent of our adventuring protagonist.

That said, The Rift does center the perspective of a man who becomes enmeshed in the world of internet misogyny.  Of course he has a shot at redemption and can change in the course of the story, but the close third person perspective on him could be off-putting to those who have been most bothered by those internet misogynists in real life – regardless of the author’s intentions and the story’s ultimate direction.

Which gets us back to the issue of niche.  While this novel does not depend on prior knowledge of Brinkman’s Babblerverse, I feel it does require some knowledge of skepticism as a culture, and of the rift that brings us the title.  If you don’t understand what skeptics are about, the story’s introduction to the concept might feel off-putting or confusing.  If you weren’t privy to the fall-out of “elevatorgate,” when the skeptic movement split into progressive and reactionary factions, then you might have a harder time understanding the very point of the story and most of the events within it.

Even within that subculture, the book could lose audience from its concept alone.  As I mentioned, the progressives burned by the IRL conflict may have very little interest in seeing a redemption tale play out.  Hopefully the ten years since the furor began will help them get past that enough to read the novel.  It handles the subject very well.  Everything that starts to feel insensitive, or like a misstep, is ultimately redeemed through the story’s plot.  It’s kind of brilliant at that, playing its hand with more subtlety than you might expect.

And all that said, maybe I’m not giving the average non-skeptic-culture reader enough credit here.  If the price is right and you like the idea of a feminist sci-fi adventure in a tabloid UFO setting, give it a shot.  And if you are in the book’s target demo – skeptic culture warriors – definitely pick this one up.

Full Disclosure: William Brinkman and I are both writers on the same blog network, which is for progressives within atheism and skepticism.

Now for the deeper thoughts I had, which probably make this one of my longest articles ever, haha…