I guess you could say he’s finally gone into the Great Known Unknown.

This July, like our Mr. Brinkman, I’m trying to finish some novels.  In my case, I’m only going to get the first drafts done, if I succeed.  One is my old commie magical realism bullshit Rent is Theft, the other is my misanthropic UFO story Centennial Hills.  Nothing exciting to announce in that, but I liked the way this combo cover turned out. 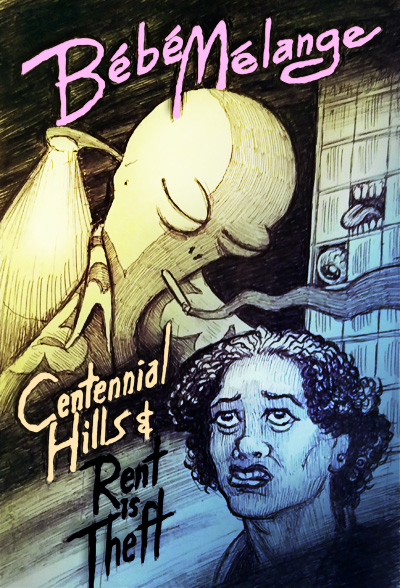 Lest anyone get the impression I’m not deep, allow me to present some art worthy of a junior high student’s pee-chee margins.  The skull is white greed, black blood on its mouth.  As the date of Juneteenth was the result of freedom delayed, we see spirits escaping the greedy thing gradually but triumphantly.  Of course, an artistic image is what you make of it, and there may be bad interpretations of this that I haven’t conceived in this moment.  And with that, I’m done! 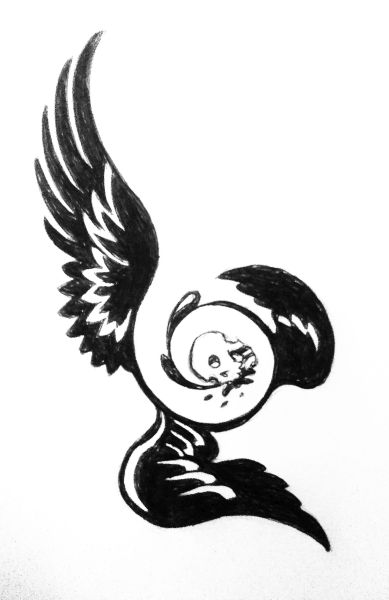 This is a bit of a lazylinking driveby post.  You’re going to see a lot of legitimate grousing from black people today about Juneteenth becoming a federal holiday and commercialized, how token gestures are useless.  But there were African Americans that pushed to make this happen – check out the article on NPR – and let’s not sour their celebration too much, here at least.  I doubt any of them are reading this, but I hope they’re having a very nice holiday today.

ETA: And another thought!  I hadn’t read the article PZ linked to on the FtB Juneteenth hub post until just now.  Having read that, doesn’t the very fact we’re doing this seem like a violation of the fourth of their (yes, a bit jokey) Juneteenth Commandments?  Well, I started doing this, might as well ride this embarrassing rocket all the way down.

Non-African-American-having FtB is throwing a Juneteenth celebration of sorts, as befits the year it became a federal holiday in a still quite white supremacist nation.  We’re tryin’, baby.  As people who care about human rights, dignity, and freedom, we have something to celebrate in the emancipation.  Thanks to the people who made that happen, by force of law, force of arms, and force of persuasion, we don’t have to live in a country where our fellow human beings are overtly enslaved.

Unfortunately, there was a loophole in that amendment, allowing the slavery of prison labor.  And worse, even if we closed that loophole, systems have evolved over time to take advantage of a desperate illegal immigrant workforce in slave conditions.  Some “illegal” workers are laboring in the open with a crude bare minimum of protection and pay, but many people who come to this country don’t have that much, and become literal slaves – shackled by the threat of state violence, deportation, etc.  It’s like the hellish bait-and-switch they use in Dubai, working immigrant muslims to death to build their gilded towers, except here it’s people from all over the world doing agricultural work, or house work, or – in the only type fuckers are ostensibly bothered by – sex work.

So while slavery persists on American soil, let Juneteenth be a rallying day for those who would fight it.  Later today I will post about the more celebratory side of things, but for this morning, some bitter coffee for the people.

And one more thought.  Not to undercut my comrades here, but I feel like this isn’t my day to celebrate?  Solemn remembrance, reflection, putting in work for the cause, OK.  But the barbecue?  The jocularity?  That belongs black folks, as it has, as it continues to be regardless of its now official seal.  This isn’t strictly a feeling about appropriation or some other SJW rhetoric.

Think of it this way – emancipation wasn’t the gift of a good thing, it was the removal of (one) bad thing.  Let’s say you spent your whole life under a rock that somebody else put there.  Eventually the guy who put the rock there comes along and helps you roll it aside.  He doesn’t help you stand up – you have to do that for yourself.  Once you are standing there, still crippled from a life on the ground, you might feel like celebrating.  But do you really feel like extending that celebration to the smug guy congratulating himself for eventually changing his mind about the rock?

There are thousands of African Americans with my last name.  I don’t have to look up a genealogy to know that means some of my ancestors were human filth that had to be murdered or forced at gunpoint to practice the most basic of human decency.  It means all those people are surely my brothers and sisters by a father who was one of the very worst types of rapist.

I’m not at all interested in the stories of white people like myself who can make this claim, whether it’s backed up by historical record or not.  Please don’t talk about your slaver ancestors in my comment section.  There’s probably another blog on this network more amenable to that, and that’s fine.  I only bring this up to say that my people did some dirt and profited from it, and I still profit from it every day, whether it’s apparent or not.  As long as that’s the case, I will let other people do the cake and cookies on June 19ths.

Remember that mother’s day when I saw crows killing a baby pigeon and had to feel all creeped out about it?  Tonight was crow’s turn for pain.  Fuckin’ middle of the night going for a walk there’s a crow skipping along the ground looking all skinny.  There’s an interested cat nearby.  A great deal of a crow’s bulk is provided by its wings.  Was it skinny because it already had a wing torn off?  Or just lost a lot of feathers during some torment?  I kept walking, hurt in my heart.

I know that’s how it’s gotta be, but it would be nice to never ever see it.  For me, at least.  I know some of you are cool with doing the dirty work of making animals into food.  I respect that.  But woof.  Not for me.

This morning is the first of my Fridays off since changing my work schedule* and I was hoping to come out the gate with a full head of steam, but my back was a bit funky and I was like, I’ll just rest a bit.  Then I had one of those dreams where nothing works right.  For reasons I don’t remember, I took a bus to Seattle, but then I still tried to do my job, which is on phones.  I had a phone that was basically a piece of paper.  I was having a sad annoying call then I remembered a phone the thickness of a piece of paper would have bad battery life, and it cut out.

But for some reason that just interrupted one call, then another dropped in.  Then I remembered I’m not supposed to be working because I have today off, but I couldn’t stop taking calls neatly without hanging up on another customer.  Then I went down through Pike Place Market, like I used to do in college.  It was hugely crowded, then I remembered it’s been less than fifteen days since my last COVID shot and I didn’t have a mask, so I started trying to bum one off of restaurant workers.

I got a mask and met my boyfriend.  We went into a coffee/art shop and there were skinny European neo-nazis in there.  We left, on the way out suggesting to the restaurant they call the cops.  In the next place we went, I saw some burly antifa types.  This is funny because IRL neo-nazis are more likely to be muscleheads and antifas more likely to be scrawny lil bros.  But I then remembered there were nazis next door and told the antifas.  They went next door and some kind of noisy rumpus began.

But on our way out, I saw some nazis chilling outside and was like, what the fuck did the antifas do?  Get distracted by a shiny object?  We kept leaving.

At some point my boyfriend went missing and I knew when I found him, he’d either be pretending to be one of the ghosts from Kiyoshi Kurosawa’s Pulse, or he would actually be one, a shadow melting into a wall and saying “help me.”  I found him behind a couch looking shadowy and threw a pillow at him to get him to stop melting.

He stood up and laughed it off like he wasn’t going to do that, but he was vibrating like a movie ghost.  I remembered he has epilepsy and wondered if it was relevant.  I don’t remember how the dream ended, but here I am.  Time to get to work!  As a creator…

*to be strictly accurate, this is the first friday of the new schedule where i didn’t have another huge obstacle in the way.  hasn’t been going great.  still at it tho.