This was supposed to be a post about the past week of early voting here in Texas to determine party candidates for November’s election.  Because it’s never just about elections, is it?  Not about the two Democrats vying for the party’s gubernatorial candidacy, former Dallas County Sheriff Lupe Valdez and Houstonian Andrew White.  Not about the slow start and the low turnout.  Not about strategies Democrats are using to encourage non-voters to vote.

Not when the week is punctuated by at least two mass shootings here in Texas: a mother whose ex-husband murdered all their children on Wednesday, and the Santa Fe High School murders on Friday.

But it is about elections.  It has to be.  In response to the shooting, Gov. Greg Abbott spoke at a press conference about his plans to address the issue of gun violence in schools.  From The Texas Tribune:

Abbott said that he had already been preparing to release several new proposals for gun laws in Texas.

Now, he said, he will begin meeting with stakeholders to propose “swift solutions to prevent tragedies like this from ever happening again.”

“We need to do more than just pray for the victims and their families,” Abbott said. “It’s time in Texas that we take action to step up and make sure this tragedy is never repeated ever again.”

That said, we have to question how much this willingness to act is a response to the upcoming November election.  Immediately following Gov. Abbott at the press conference was Sen. Ted Cruz, who has received an A+ rating from the NRA.  Though Sen. Cruz should have been at the press conference as one of the elected representatives of the state, his presence after Gov. Abbott’s remarks seemed, to me anyway, to throw a shadow over any proposed action.  If any of the GOP elected officials from Texas had been serious about gun control after, say, the church shooting in Sutherland Springs or the shooting at a home in Plano last year or any other recent mass shooting, then why wait for this particular horror to announce the proposed new gun laws?

In a year when Gov. Abbott’s position isn’t realistically threatened by his Democratic opponent, whoever that turns out to be, Rep. Beto O’Rourke does have a chance at unseating Sen. Cruz, and in smaller races around the state, Republicans may be defeated by their Democratic rivals.  So perhaps Gov. Abbott doesn’t need to speak to moderate voters for his own good, but he does for those candidates in his party.

So, Gov. Abbott may be right about one thing: what we need isn’t more “thoughts and prayers.”  And what we need isn’t just announcements of proposals overshadowed by reminders that too many members of his party are beholden to the gun lobby, either.

What we need is solid blue turnout in November.

The Speculative Poets in Conversation Series features interviews with writers of science fiction and fantasy poetry about how their work addresses social justice issues. For the second post in the series, I spoke with poet Christina M. Rau about her 2017 collection Liberating The Astronauts, published by Aqueduct Press.

Christina M. Rau is the author of the sci-fi fem poetry collection, Liberating The Astronauts (Aqueduct Press, 2017), and the chapbooks WakeBreatheMove (Finishing Line Press, 2015) and For The Girls, I (Dancing Girl Press, 2014). Her poetry has also appeared on gallery walls in The Ekphrastic Poster Show, on car magnets for The Living Poetry Project, and in various literary journals both online and in print. She is the founder of the Long Island reading circuit, Poets In Nassau, and has read and run workshops for various community groups nationwide. She teaches English and Creative Writing at Nassau Community College where she also serves as Poetry Editor for The Nassau Review. She tweets on Twitter, pins on Pinterest, reposts on Tumblr, reviews on Goodreads, updates on Facebook, regrams on Instagram, and does whatever one does on Snapchat. In her non-writing life, she teaches yoga occasionally and line dances on other occasions.  Find her links on http://www.christinamrau.com 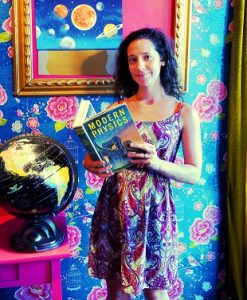 Freethinking Ahead: The poems in book touch on topics as varied as romantic love, self-discovery, art, technology, memory, and so on while creating a whole that uses science and science fiction as metaphor, reference material, and context. Did you start writing the collection with that end in mind? And do you see the wholeness of the book as working in tension to the “standing out through not fitting in” you note in your dedication? Or as an act of standing out in itself?

Christina M. Rau: I had no clear end in mind when I was putting the collection together. Actually, I had no idea I was putting together this specific collection. (I was actually working on a collection about nymphs and gnomes and other magical creatures). When I found the poem “Liberating The Astronauts” in my files, I realized what it was about—I usually don’t know exactly what I’m writing about until later on. I realized it’s a metaphor. I’m the astronaut, along with anyone who has ever felt out of place. I’ve spent my entire life in an awkward phase, and through poetry, I found that I can be free in that awkwardness. All the poems about relationships and science are really about self-discovery and self-acceptance. When I put all the poems together and sought out a home, I found Aqueduct Press and realized that sci-fi fem was a real thing, and that’s the thing I’d been doing. They helped set my little poems free into the world.

FTA: I’d like to ask about the fact a number of your poems in this collection are erasure poems or are poems that quote canonical SF movies. I think there’s a tendency to see prose as more accessible or at least as more visible than poetry. Do you view your poetry as engaging prose and other media such as film in a way that works against this view? How does this use of canonical SF tie in with your larger concerns as a poet? 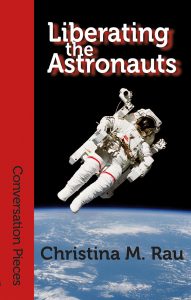 CMR:  The erasure poems in this collection are the first ones I’ve ever written. I’m a blogger, so that’s my prose outlet. Otherwise, I stick to poetry. Sometimes even in poetry, finding exactly what I want to say doesn’t click, but I do get inspired by reading a lot. That’s where all the epigraphs come in. I use them often. I gave erasure a try using one of my favorite books, The Great Gatsby. Then I went back to Stanislaw Lem’s Solaris, knowing that it spoke to me but I wasn’t exactly sure how. In reworking that text in two ways, I found a lot of ideas bursting through that were stuck when I had a blank page. Though sometimes prose is thought of as more accessible, the way in which this latter erasure emerged seems to be even less accessible! However, since the genre is speculative, it fits into that breaking-boundaries mindset. Poetry, in many ways, is boundary-breaking, too. Poems help people find a voice, and that voice can tie into many different facets of life. A lot of the poem in Liberating deal with a coming-of-age voice and a voice of feminism.

FTA: Some of the poems in Liberating the Astronauts use scientific principles as underlying metaphors (for example: “The Atomic Hypothesis,” “Kepler’s Laws,” and “Withstanding Mars”) while others venture into science fictional contexts (such as “Colony Collapse,” “Where to Go on a Rocket Ship,” and “Mermaid on the Moon.”) What guides your choices in moving past contemporary science (or contemporary settings) and placing these poems in speculative contexts?

CMR: As I alluded to earlier, I steal as many poets do. However, I don’t steal and keep it the same. I steal an idea and make it my own, so all the hard science I find fascinating becomes a basis for exploration in a more poetic direction. Science must rely on research, methods, and facts. While some poetry deals with those ideas, it doesn’t have to. I take facts and reinvent them. That’s where speculative comes into the picture—once I make the science mine, it’s all speculation. The main sources of guidance are connotation and sound. I grew up in a household that lent itself to math and science, so math and science words sometimes take me back to growing up, and that’s what I mean when the science becomes my own and emerges as poetic verse. Plus, science has a lot of great-sounding words. Sometimes I don’t know what a word means, but I know I need to use it because it sounds spectacular.

FTA: Recently, you spoke at the Split This Rock festival about speculative fiction as a voice of activism. Can you recommend one or two books of speculative poetry that exemplify this?

CMR: The panel I’m moderating for Split This Rock is entitled Fantasy As Reality: Activism and Catharsis Through Speculative Writing. Each panelist has their own spin on speculative writing:

Additionally, there’s a whole world of speculative poetry—from more science-y stuff to super-sci-fi-fantasy— that gathers virtually over at the Science Fiction & Fantasy Poetry Association [http://sfpoetry.com/].It’s a great place to dive in and get lost for a while.

I couldn’t stop at just two recommendations. There’s simply so much good speculative writing out there.