The Friday before Christmas I took part in a rally/demonstration that started at the Vancouver Art Gallery as part of the #IdleNoMore movement. I arrived to a small group of people with drums, tobacco, and more than a little resolve. That group would grow in size as the demonstration continued. 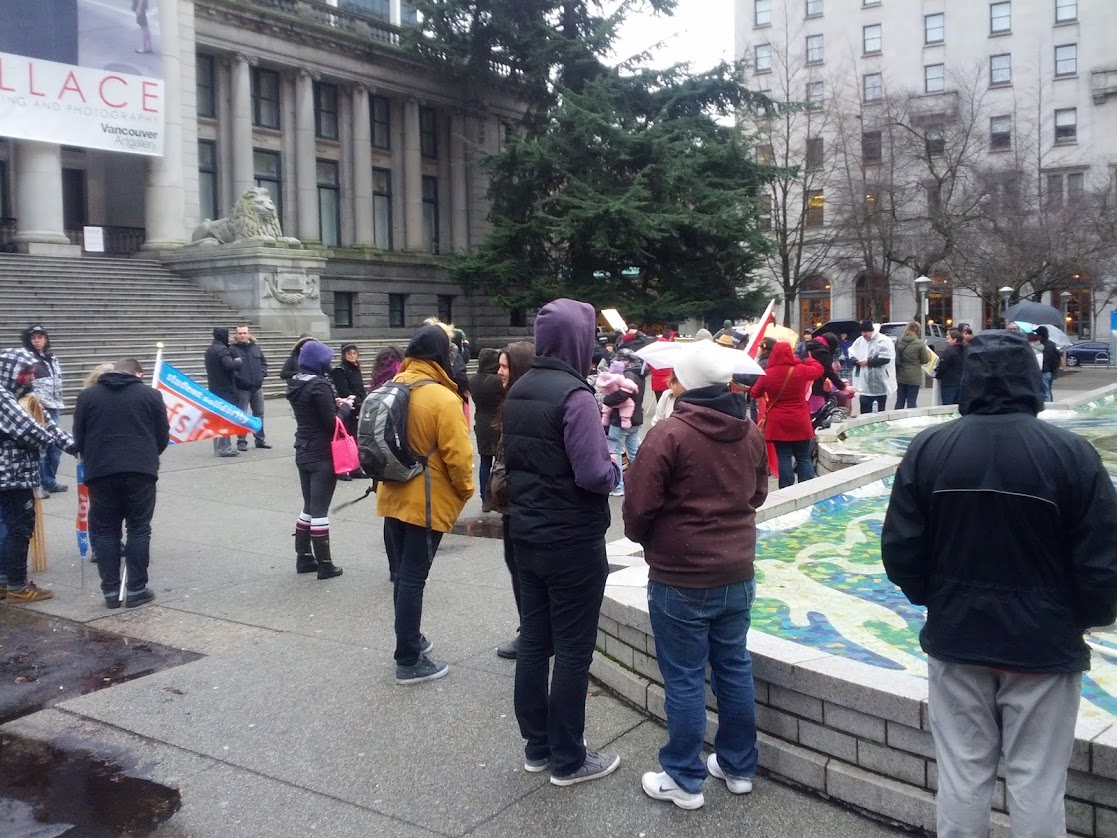 It was interesting for me to note that while it has become more or less de rigeur to start ceremonies of great import in the city of Vancouver by acknowledging that the city is built on land that was not ceded through treaty by the Coast Salish people who still live here, this was the first time I had ever been at an event where those words had been uttered by a person who identified hirself as Coast Salish. This particular gathering was dominated by aboriginal people, an experience that was novel for me. Growing up where I did, a native person was like a puffin: I knew of their existence, I knew they were somewhere relatively nearby, I generally wished them well, but I never expected to see one up close. 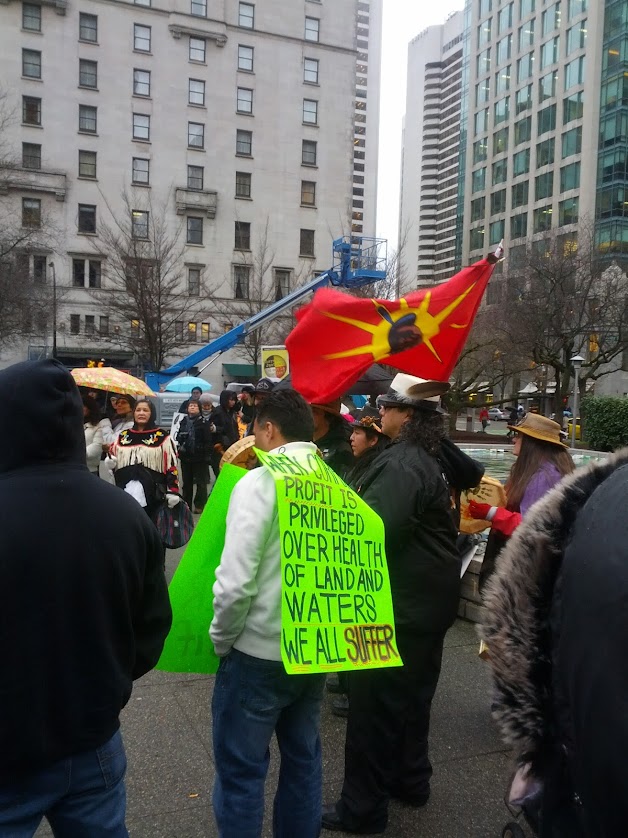 There were songs, there were speeches, there were specific policies addressed and there were general statements of both frustration and encouragement. Many demonstrators introduced themselves in their own tongues before translating their introductions into English, a technique I found powerful and persuasive. Many of the demonstrators were not Coast Salish themselves, but were either living in Vancouver or travelling as part of a general protest movement. Either because of the simple fact of crowd demographics or (hopefully) out of a sense that this was not about them, only two non-Native people spoke, and even those were mercifully kept quite short. My own feeling was that this was a time for me to listen, given that I have more than enough opportunities to speak in various other places in my life.

I was also struck by the number and prominence of women at the rally. Most of the prominent speakers were women, without any seeming intentional mechanism for their inclusion and prominence. I don’t know enough about how aboriginal social structures are different from European-descended ones, but it may have more than mere coincidence. 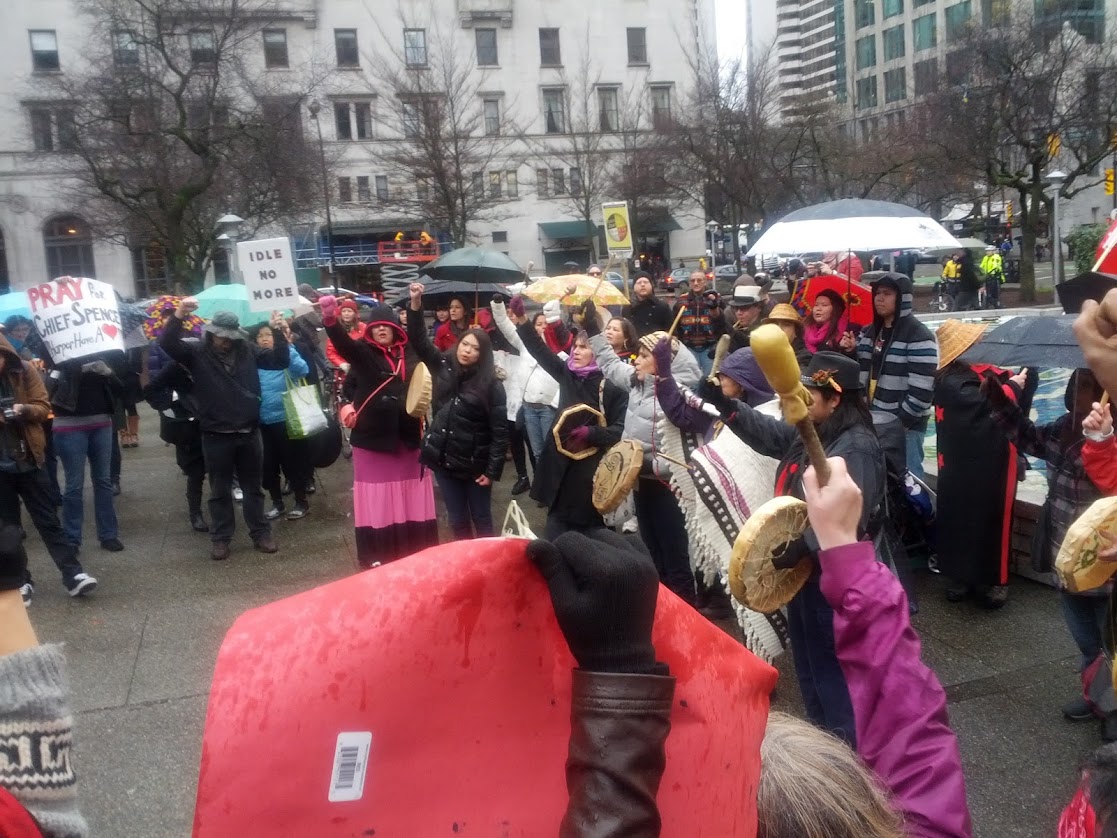 Singing the Women Warrior song at the demonstration

After the speeches, the assembled group headed up to the intersection of Granville and Georgia, one of the city’s main intersections, to perform a Round Dance – essentially a giant, rotating human circle with drummers in the centre. Those of you who are Canadian history buffs will appreciate the irony of the photo I was able to take of this event: 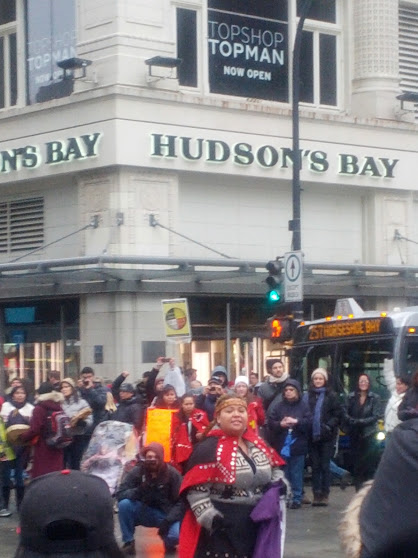 You can check out some more of the photos from the event by following this link.

I stuck around for a few rotations of the circle, and tried my best to get passers-by to join in. Generally, people were curious and well-tempered. Nobody seemed angry or said anything that I could hear to suggest that the demonstration was unwelcome. Police were present, blocking and diverting traffic away from the demonstration, which is what I have come to expect from VPD at events like this.

There was another demonstration the following Sunday, but I was out of town at that point. I would like to attend another of these demonstrations if possible, but I am back to work and school this week, meaning I will have fewer opportunities to attend things (at least during weekdays). What I will suggest is that if there is a demonstration in your city, go and take part in it. The fundamental issue (or at least one of them) of this movement is getting Canadians to listen to aboriginal people and engage in meaningful dialogue. There’s no way to put into words what it was like to be there – to be part of the ceremonial preparations, to hear the earnestness and pain in the voices of the speakers, to be welcomed into the round dance and to move in concert to the drums and singing – it is something that is best experienced in person.

Those poor Wall Street CEOs » « Why I will be #IdleNoMore