An enduring American meme within the contemporary Republican party*, especially in this latest primary season, is that America is a white country. This one is no longer explicitly vocalized as plain and notorious expressions of racial supremacy have become less acceptable, but in the current political climate the layer of rhetoric that is cloaking the racist motivations behind many of the statements made by mainstream politicians are about as thick as an onion skin (and nearly as transparent).

Another salient foundational myth (and one that has more than a little currency in Canada) is that it is, and always has been, a “Christian nation”. The contemporary face of this quaint notion is the Republican Party’s current fascination with historical fiction yarn-spinner David Barton (a man who lacks the decency to advertise or even admit that his accounts are not based on fact). And despite the minimalizing language I’m using to describe the meme and its champion, the idea of America as a Christian nation has major national currency, to the point where it meaningfully informs policy.

It is an interesting exercise to try to imagine what the world looks like when seen through Republican eyes. In order to maintain any of these myths, one needs someone like David Barton with a knack for selectively abstracting enough fact to build a framework and then plastering over that framework with a thick layer of conveniently-invented bullshit. However, knowing what we know about how privilege can strip away levels of awareness by blinding you to significant facts, and the magnifying effect that being surrounded by others who share your perspective can have, I found the following exercise interesting.

A Pew research poll put the number of Christians in the United States at about 78% of the population. Granting the most ecumenical of assumptions and granting some currency to the idea that the various religions out there are just ‘different paths to the same god’ or something to that effect, we can add in the 4.7% of the population who adhere to religions other than Christianity. Stretching that assumption to its absolute limit, we can include the 5.8% of the population who describe themselves as ‘religious unaffiliated’ – believers, but not part of any particular faith group.

Adding these groups together, we arrive at an America that is roughly 89% religious in the sense that they believe in something supernatural**. It is therefore no surprise that when Americans look around, they see a religious country – nearly everyone surrounding them is a religious believer.

More recently, the good people at Pew looked at political party affiliation across a number of demographic factors, including race. The results are… perhaps not terribly surprising: 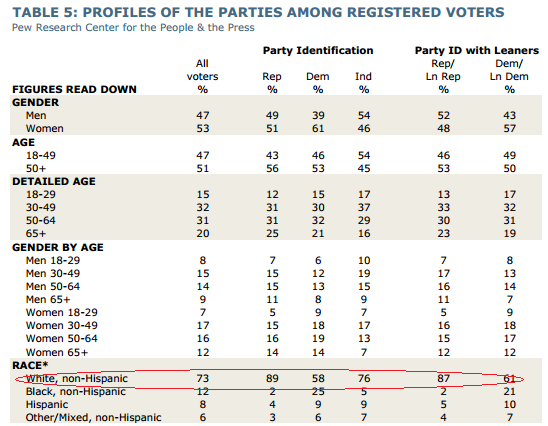 Today’s Republican party is 89% white. It is therefore similarly no surprise that when Republicans look around, they see a white country – nearly everyone else surrounding them is white.

First, I have to make a point of this: the similarity in terms of numbers here, while fascinating, is merely coincidence. White people are in fact, as a population, less religious than many other ethnic groups. The 89% of the American population that are believers are also split across party lines (although even this is skewed Republican). The trend is not a coincidence, but the fact that both numbers add up to the same value is just a neat accident of polling.

Second, it is also interesting to note the similarity in terms of numbers and resulting minority denial among religious black Americans who deny the existence of black nonbelievers, even though their number is roughly equivalent to the number of black folks in the USA. Again, the numerical similarity is coincidental, but the psychological processes by which majority groups arrive at their conclusions about minorities is perhaps not quite so accidental.

Third, and probably most importantly, it is interesting to note the parallel trends between white America and religious America. Both are poised precariously on a demographic precipice, and staring their own unprecedented obsolescence in the face. There are in fact some voices of moderation who have an eye toward re-branding and making themselves more accessible and future-friendly. There is, however, a major headlong rush among many to attempt to legislate their way back into the relevance they enjoyed for generations, thus making their rapidly-diminishing privileged position a permanent one.

Ultimately, however, the impulse to dodge toward the meanest, and most myopic conservative impulses will be the undoing of both of these movements. The number of religious ‘nones’ grows year by year, many citing dissatisfaction with the level of hatred evinced by their clergy toward gay people and members of other religions. The proportion of white Americans is dropping as well, as immigration, economics, and social policies interact with diminishing public acceptance of racism and increased rates of cross-racial marriage.

In either case, the day is quickly approaching when the only people advocating positions classically held by these soon-to-be-former majority groups will be those desperate holdouts, ranging against the rising sun and bitterly clutching at the scraps of their tattered history.

*I take pains to word it this way, as many Republicans have suddenly discovered the value of studying history and will angrily point out that Democrats used to be explicitly white supremacist. Nobody is disputing that; however, it happened 60 years ago and all of them abandoned the Dems to join… oh that’s right they joined your party. Pointing to Southern Democrats to deflect from the racism in the Republican platform is like demanding that all adults be forced to wear diapers because they used to be infants. Yes, that’s true – but eventually they learned to stop shitting themselves.

**It is perhaps worth noting that the 11% of Americans who identify as atheist, agnostic, or ‘secular unaffiliated’ are a larger bloc of voters than all the other mainstream non-Christian faiths combined – by a factor of 2. I wonder when the news will start reporting how politicians are doing with the “non-theist vote”.

The past is not passed » « The eye of the beholder