I have not written about the #Occupy movement in a while, owing somewhat to the disappointing failure of Occupy Vancouver to resurface at the beginning of this month. However, I have not stopped believing in the validity and necessity of the cause. I recognize that there is a Sisyphian task of convincing the general public – like a frog in a pot of gradually warming water – that there is an urgent problem that needs addressing. Most people would rather retreat to trite platitudes about ‘laziness’ and ‘entitlement’ and ‘handouts’ instead of bothering to take a moment and look around and realize that something is really rotten. The myths about hard work and achievement that this society was built on are hollow in the face of reality, but like so many other things, it is easier to perpetuate the myth than make the necessary change.

There are few people on television I find more odious and more historically unnecessary than Sean Hannity. I say ‘odious’ for reasons that I imagine are obvious to anyone who’s watched him interview anyone that isn’t Ted Nugent. He hops from ‘question’ to ‘question’ (they are actually not questions, but straight-up lies thrown at a guest who is not given a chance to respond before the next salvo is launched), reducing the interview to little more than a televised bullying session. I say ‘historically unnecessary’ because men like Hannity have always been around, arrogantly strutting and trying to pass their stereotypes off as wisdom. This is perhaps no better displayed than in this video:

To Mr. Schultz’s credit, he appeared to take Hannity about as seriously as he deserved. Schultz refused to allow himself to be talked over, and did his level best to expose the utter banality of the host’s complete disinterest in actually having a productive conversation. He got in a couple of good ‘zingers’ as well. Of course, Hannity can’t have that, so he goes on the full attack at the end, and then as though to cement his image as nothing above a swaggering high-school bully, he throws a football around. I’m surprised he didn’t call Schultz a ‘dorkwad’ and try to give him a swirlie.

At any rate, while I doubt there are many of you who disagree with the Occupy movement, there may be some who don’t quite understand what all the fuss is about. Here’s a brief list of only some of the reasons to #Occupy.

1. Standard of living has gone way down

Using the year 2000 as the numerical base from which to “zero” all of the numbers, real wages peaked in 1970 at around $20/hour. Today the average worker makes $8.50/hour — more than 57% less than in 1970. And since the average wage directly determines the standard of living of our society, we can see that the average standard of living in the U.S. has plummeted by over 57% over a span of 40 years.

There are no “tricks” here. Indeed, all of the tricks are used by our governments. The green line shows average wages, discounted by inflation calculated with the same methodology for all 40 years. Obviously that is the only way in which we can compare any data over time: through applying identical parameters to it each year. Doing the same job today makes you less money than it did in the 1960s. Yes, the absolute number on your paycheque has never been higher, but the number of things you can do with that paycheque is about equal to what it was since the Second World War. 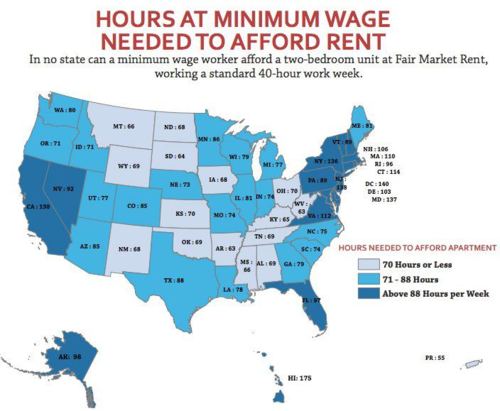 Despite Mr. Hannity’s unbelievably annoying repeated suggestions that Mr. Schultz should just “get a job” (ignoring, of course, that unemployment among youth is twice the national average and there simply are no jobs for him to ‘go and get’), the graph above shows that having a job is no safeguard against debt. In fact, you’d need to have two jobs just to make rent. Mr. Hannity brags about how he worked his way up from being a dishwasher or some ridiculous lie of a story, but he was 29 in the 1990s, when the living wage was actually much higher. It was possible to support yourself on a dishwasher’s salary then. Now, you’d have to spend 16 hours a day with your hands in a sink just to keep a roof over your head.

3. Getting out of poverty is getting more difficult 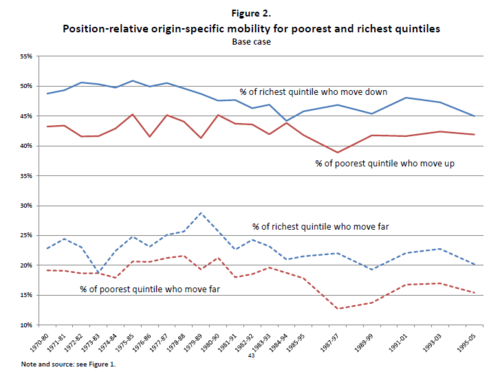 Over time, the number of people who have been able to rise above the crushing yoke of poverty has been shrinking. The above graph terminates in the 1990s, relatively stable. Take a look at the situation now:

Those born at the bottom stay there, and as the effective power of wages shrink, more and more people are finding themselves swimming in the shallow end of the economic pool.

4. Not everyone is suffering equally

The level of income inequality has not been so high in the US since immediately before the Great Depression. After decades of high marginal tax rates built the infrastructure (both physical and human) that created the modern United States, the idea that the wealthy should pay what they can changed from an American value to a radical socialist agenda to crush ‘job creators’. The marginal tax rate is back where it was in the 1920s. So is income inequality. Taxes won’t get lower for these ‘creators’ – where are the jobs? 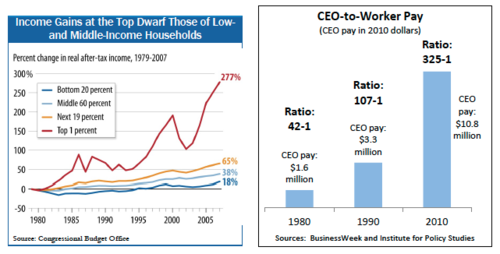 Your job is worth less and less, but somehow the money is found to make sure that those who need it the least are being rewarded the most. Mr. Schultz said that capitalism is broken – he is right. The system we have now is very much unlike the capitalist system that Mr. Hannity condescendingly describes. Those with the power and influence reward themselves not for making a better product, but for finding better ways to take money out of the pockets of those lower on the ladder.

Despite the fact that they have all the money and political influence, people are starting to recognize that the true power lies with them. By refusing to obey the rules of the rigged game that is contemporary capitalism, by taking to the streets and demanding that changes be made, people are exercising the most potent form of power for change. This has the status quo spooked, because they are not used to large groups of dissidents. That’s why they’re trying to stir up dissent like the convicts and rapists being sent to Zucotti. While it might sound paranoid, it doesn’t exactly sound unlikely either:

Hundreds have been arrested during the Occupy Wall Street protests, but photographer Alexander Arbuckle’s case was the first to go to trial – and after just two days, the Manhattan Criminal Court found him not guilty. Supporters of the OWS protest movement have already hailed the ruling as a major legal victory. Arbuckle was arrested on New Year’s Day for allegedly blocking traffic during a protest march. He was charged with disorderly conduct, and his arresting officer testified under oath that he, along with the protesters, was standing in the street, despite frequent requests from the police to move to the sidewalk.

But things got a little embarrassing for the NYPD officer when the defense presented a video recording of the entire event, made by well-known journalist Tim Pool. Pool’s footage clearly shows Arbuckle, along with all the other protesters, standing on the sidewalk. In fact, the only people blocking traffic were the police officers themselves.

Tyranny only has a few tricks, like evidence planting and abusing authority to fracture group solidarity. However, they’re finding it harder and harder to get away with that, because a) people are wise to the tricks, and b) everyone is a journalist. It’s only a matter of time before police forces the world over recognize that they live in a very different world – a world in which they are not feared, and they are not respected, and they cannot hide behind the shield of their office.

There are so many more reasons to #Occupy. This is just a short list of some of the financial reasons. I haven’t even touched the potential to occupy racism, sexism, political corruption, corporate greed, cronyism… there is no end in sight to the improvements we can make if we continue to pay attention and ignore the Sean Hannitys of the world.