This is part 4 of an ongoing discussion of a paper by Jost, Banaji and Nosek discussing System Justification Theory. Read Part 1. Read Part 2. Read Part 3.

In this morning’s installment, we explored the phenomenon of implicit valuation of members of high-status groups. Despite what we may say, or what we may consciously believe about ourselves, our actions reveal subconscious attitudes that we may have. Our wish to approve of, or make excuses for, the status quo of our social lives leads those who are on the top of power gaps to exhibit bias towards themselves. At the same time, that same desire puts those at the bottom of those divides in the somewhat bizarre role of showing the same bias – toward those at the top. This effect is not seen when measuring explicit attitudes – what people are willing to admit to – but shows up when we can find ways to ‘bypass’ conscious processing.

In this installment, I’m going to look explicitly at one aspect of how system justification theory manifests itself: political ideology.

Translation: the size of the bias effect increases when system justification pressures increase.

Basically, this is simply a statement that there is a dose-response relationship between system justification and how strong the bias towards those at the top is. This one is kind of a gimme – if system justification is responsible for the effect, then more justification yields more effect. However, the authors pivot this hypothesis in an interesting and relevant way:

Translation: Political conservatism, as an ideology synonymous with system justification, is related to the bias in the same way.

I remember a presentation at a conference I recently attended where the speaker was answering a question – someone asked him if people who did [certain practice that is not worth explaining] had the wrong idea. The speaker mulled this over for a second and said “well that depends. I wouldn’t say [name of person] is doing things wrong – look how much money it’s made him! But if he’s trying to improve the health and well-being of humans, then yes he’s doing it completely wrong.” This is more or less how I feel about conservativism. It’s not ‘wrong’, unless your goal is to make the world a healthier, happier, more equal place for your fellow creatures; if that is your goal then conservatism isn’t very good at doing that.

The authors, based on work they’d done in the past, identify political conservatism as an expression of system justification: providing moral and intellectual rationalization for resisting change (maintaining the status quo) and explaining away inequalities. Their contention, based on this work, is that the more conservative someone is, the more likely they are to exhibit the kind of biases seen when system justification pressure is high. They point to research that seems to illustrate this effect: 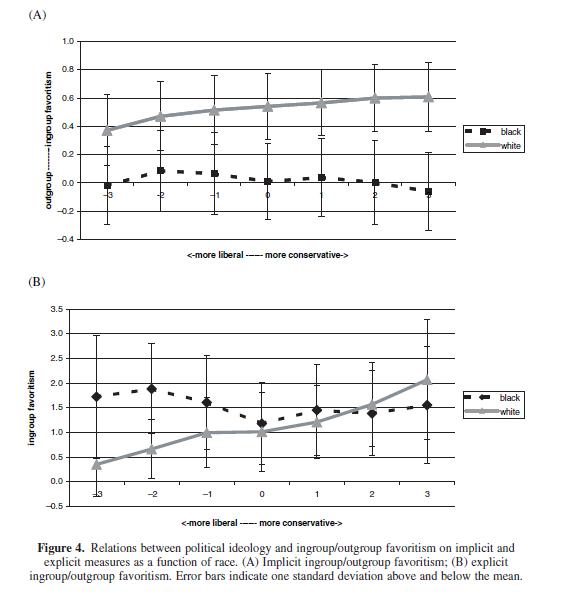 As you can see from the above graph, the more conservative beliefs held, the more likely people (well, white people, apparently. Straight people too) are to hold ingroup-biased attitudes. Interestingly, this is true of both implicit and explicit attitudes, which means that white conservatives are more likely to admit that they prefer other white people. Nothing ground-breaking or shocking about that, I suppose (unless you’re one of those conservatives that believes that liberals are the “real” racists). What is interesting, however, is what happens when you compare the two plots for black responders. While black people avowed in-group preference, their implicit attitudes show that they are more or less neutral to their racial preference. While this study is perhaps insufficient to demonstrate the effect on its own, the trend does raise an interesting question.

I’m about a week behind Stephanie Zvan in discussing how this theory relates to the Occupy Together movement and the Tea Party, but that’s only because I had to work through all the pieces that came before. If we can agree that, generally speaking, the Occupy Together movement is liberal and the Tea Party is conservative (that’s how they poll, at least), then this article comes into sharper focus:

In recent days, many of them have issued statements denying any similarities with the Occupy Wall Street. Judson Phillips, spokesman for the Tea Party Nation, responded to the claim with this: “The clueless revolt continues and it is painfully obvious those who are showing up to ‘protest’ do not have a job. In most cases, it is painfully obvious why they don’t have a job. To paraphrase the Jimmy Buffett song Margaretville: ‘It’s your own damn fault’.”

Independence Tea Party President Teri Adams was somewhat less flippant but equally unequivocal in her rejection of Occupy Wall Street: “The idea that Wall Street is the root of all evil is an anathema to us.”

It is very hard to imagine that these movements will find common cause. They may both believe that “virtue resides in ordinary people” and that they have the skills and platform to “bring their would-be superiors down to earth” but their definition of who is ordinary and who is superior is radically different.

Even a casual stroll through the “We are the 53%” counter-tumblr (inaccurately named, but we’ll let them keep their weird label allegiance) shows many prime examples of system justification theory – people reacting to stories about people working their fingers to the bone and not getting ahead, by saying “I work hard too and don’t succeed – stop complaining!” To the extent that both the Tea Party and the “53%” both reflect system justifying attitudes, their defense of the people who are screwing them over becomes less and less mysterious.

Insofar as system justification and political conservatism are analogous (one might say synonymous), system justification theory gives us a fairly decent insight into the seemingly-inexplicable tendency for conservatives to defend the same practices that keep them shut out from opportunity. For all its talk of rational self-interest, political conservatism betrays a strong desire to uphold the status quo over and above any desire to see individual success. This desire may be mitigated by factors like race or sexual orientation, which explains why minority groups tend to migrate toward liberal ideas to a greater extent than conservative ones. We will explore this phenomenon in greater depth in next week’s installments.