Every now and then I actually do stuff out in the real world. I recognize the fact that this practice is risky, but what can I say? I’m a thrill seeker. This Saturday, as I announced previously, I spent the afternoon downtown Vancouver as part of the Occupy Vancouver protest event*. If you’ve been living under a rock for the past month, the movement started in September. People who are frustrated with the way that the economy is being run, and that extremely shady and disruptive bank practices were being pursued – despite the fact that those same practices resulted in an international financial collapse, began sleeping and living in a park in the middle of New York City’s financial district. The movement quickly caught steam after police tried to suppress the people’s legitimate rights to protest, and has spread across the United States and into other countries around the world. 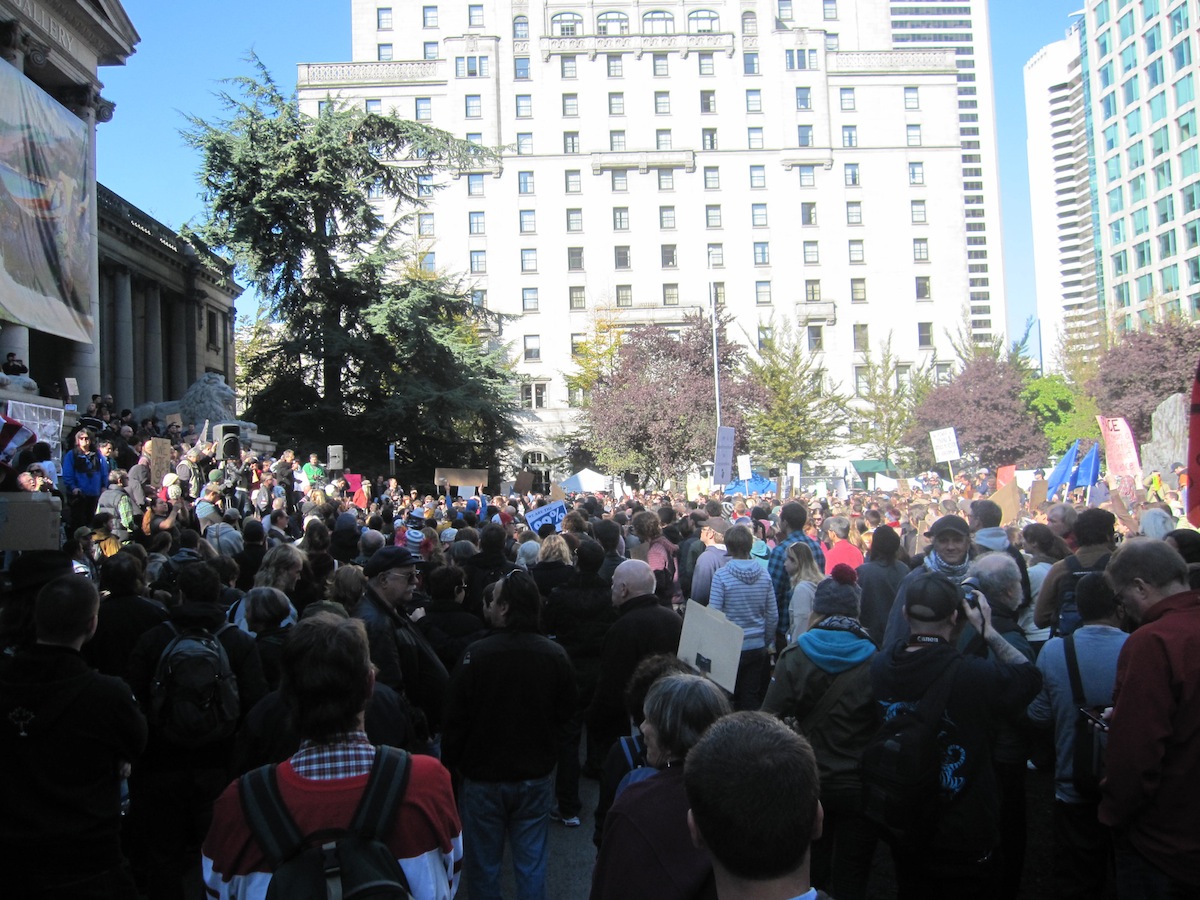 Why was I there? I am, at least for now, comfortably employed at a job I love with pay that is adequate for my needs. Canada has a secure banking system with regulatory safeguards to ensure that the practices that screwed the world over can’t happen here. We have strong corporate lobbying laws that make it impossible for companies to buy influence the way that they can in the United States. So what on Earth was I doing getting involved in a protest about things happening in someone else’s country, that Canada can’t control? Despite the fact that it’s not happening to me directly, I still recognize that the current political and financial system is both unsustainable and damaging to millions of my fellow creatures. It is primarily for that reason that I endorse the Occupy movement. Initially, my reason for actually attending the protests was to show solidarity with my ideological brethren in New York, but as I learned more about the reality of things on the ground, my reasons expanded beyond that. 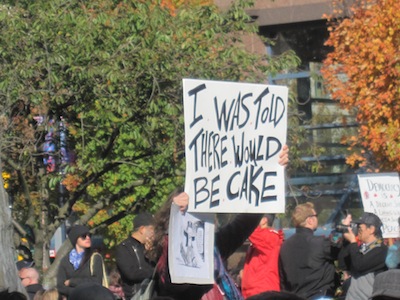 That's what you get for listening to GLaDOS

There has been, since the beginning, a persistent narrative that these protesters are socialists who are engaging in class warfare to get their hands on the money of people who were willing to work for it. I’m not sure how it’s possible that everybody read Ayn Rand without understanding how full of shit she was, but it seems to be Objectivism gone wild in the media. The problem with this narrative is that it in no way matches reality. People are working their balls off, working 2-3 jobs at a time, simply to keep drowning slowly. When full-time work can’t provide you with a living wage, then something is wrong with the way we structure our economy.

What was I doing?

So I decided that my contribution to the event would be to represent not only myself, but those people like me who have their heads above water, yet still recognize that large-scale changes are needed, and that these changes will benefit all of us. I am not usually one for dressing to explicitly send a message (although I tend to agree with Greta Christinathat fashion does communicate information, I usually dress for comfort and ignore whatever signals that might be sending). This particular day, however, I thought of an excellent way to get my message across without having to open my mouth: I put on my suit. 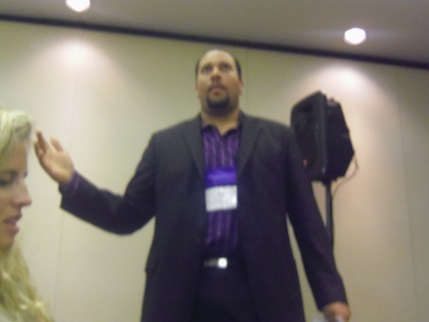 Hey everyone! Come see how good I look!

In so doing, I was able to convey that the 99% also includes people who are employed professionals. The problems of the financial sector of our economy affect us all because, as woo-woo as it sounds, we are all connected to each other. If a large segment of our population is suffering from severe economic insecurity, they cannot participate in the economy as anything more than subsistence consumers (if that). That means less productivity, which in turn means my job won’t last as the market for our goods dries up. I was also actively trying to dispel the stereotype of the protesters as lazy, undisciplined parasites who would rather get a handout than work a spade. I am an ardent supporter of the ideals of this movement, and there’s absolutely no way that this label applies to me – I wanted everyone who saw me to see that as well.

I got to the Art Gallery, the site of the protest, at around noon. There was already a large crowd gathered, with a loudspeaker system set up on the front steps. There was also a First Aid tent, with smaller pavillions all over with representatives from various causes. Most of them were bullshitty – “food freedom”, 9-11 Truthers, the Zeitgeist guys – but there were also tents from people like Food Not Bombs, who were giving out as much food as they could to the Occupiers. I dropped off a tent, sleeping bag and bedroll, since I had been told that those were needed by those who were actually planning on staying on site. Say what you like about the protesters, but anyone who’s willing to sleep outdoors in October in Vancouver is pretty badass. I then turned my attention to the loudspeaker. 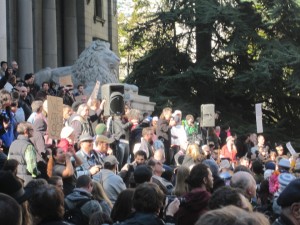 The grassroots nature of this movement is a double-edged sword. On one hand, because it is leaderless, everyone has a chance to speak and have their opinions heard. On the other hand, everyone has a chance to speak. The mic was occupied by a small number of people who actually seemed to have good ideas, but who were drowned out by amateur local municipal politicians, fringe cause activists and people who were just generally a bit nuts (particularly one gentleman who started off talking about tax cuts for small business, and then ended by calling for a ban on prostitution and marijuana/alcohol – he was not well-received). I was happy to see a city councilor there, and my MP got a shout out from one of the speakers so that was nice too. After about an hour of that, the crowd (whose numbers I estimate at around 1500-2000) gathered to march. I’ve spoken before about the weird relationship I have with Vancouver police – weird in that I actually like and respect them. I don’t trustthem, but every time I’ve had interactions with them, they’ve been totally professional and behaving the way police are supposed to. This time, they were blocking traffic for the march, and quietly observing the protest. Some of them even seemed to be enjoying themselves 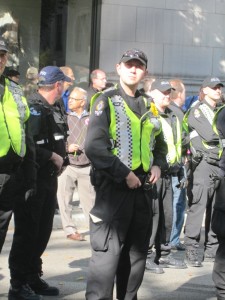 The march, which lasted for about an hour, wasn’t particularly impactful, except that it annoyed the crap out of some drivers who were trying to do stuff on a Saturday. I had the opportunity to speak to the media (being the only one in a suit helps with that), but was pretty skeptical about whether or not I’d actually get included. Frankly, someone who can speak with at least some purposeful clarity about the Occupy movement doesn’t fit the prefabricated media narrative of an undisciplined mob of whiners – I’m sure there’s a cutting room floor somewhere that I’m decorating nicely. 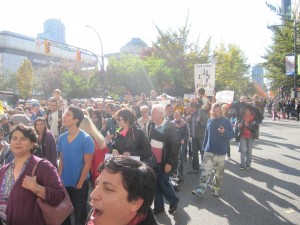 My support for the Occupy movement has not abated. If anything, it is stronger than it was before I went downtown. I am a big believer in participating in democracy, especially when done outside the context of an election. This was a large, diverse group of people who are engaged in an act of protest against a system that has trapped them with no clear solution. As a result, it has yet to really find its focus. I didn’t agree with all of the opinions I saw expressed that day, but it was encouraging to see people actually caring about things rather than just throwing their hands in the air and pronouncing the problem intractable.

I will continue to make my way down to the Art Gallery periodically to participate and observe. There may be an opportunity for me to do some political outreach there as well, but that idea is in its infancy. For now, I am just gratified that the event has been peaceful, disciplined, positive and enthusiastic.

* Which is, itself, somewhat ironic. The city of Vancouver is built on unceded Saalish Indian territory. Technically, Vancouver is already “occupied” by people who have no legal right to the land.