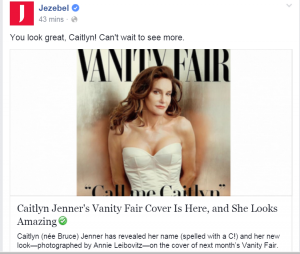 Then a glam photo of Jenner in a strapless dress with long flowing hair and tasteful makeup.

Caitlyn (née Bruce) Jenner has revealed her name (spelled with a C!) and her new look—photographed by Annie Leibovitz—on the cover of next month’s Vanity Fair.

So she looks great, so what? Isn’t Jezebel supposed to be at least nominally feminist? Isn’t feminism in large part about not reducing women to their looks? Why does that suddenly change when the subject is a trans woman? What am I missing here?

Guest post: Better still if you brought yours back from the Holy Land » « IS cannot destroy these