So the cover of the next Charlie Hebdo appeared on Newsnight, but it doesn’t appear in the story on the BBC website. The story’s headline is “Charlie Hebdo’s latest edition to depict Prophet Muhammad” but the depiction itself is absent. No depiction for you.

The cover of the latest edition of satirical magazine Charlie Hebdo has been published in French media, and depicts the Prophet Muhammad.

The cover shows the Prophet holding a sign reading “I am Charlie”, below the words “all is forgiven”.

The magazine’s lawyer Richard Malka told French radio earlier that it was important to show that staff would “cede nothing” to extremists.

As always with these things…it doesn’t really “show the prophet” – it shows a crude cartoon of a guy in a turban. The cover doesn’t label him “Muhammed.” It’s all very abstract, as always.

But in any case – the BBC doesn’t show it in this story talking about it. So much for the idea that it’s important to show that nobody is ceding anything to the murderers. (They’re not “extremists.” They’re murderers.)

The slogan “Je suis Charlie” or “I am Charlie” was widely used following Wednesday’s attack on the magazine, as people sought to show their support.

Three million copies of Wednesday’s edition are being printed. Normally only 60,000 are available each week.

Mr Malka told France Info radio: “We will not give in. The spirit of ‘I am Charlie’ means the right to blaspheme.”

Survivors of the massacre have been working on the magazine from the offices of another French title, Liberation.

Five of Charlie Hebdo’s top cartoonists were killed in the attack.

The new edition will be created “only by people from Charlie Hebdo”, its financial director, Eric Portheault, told AFP news agency.

Contributions from other cartoonists were declined.

Here’s the cover again, in case you’re missing it already. 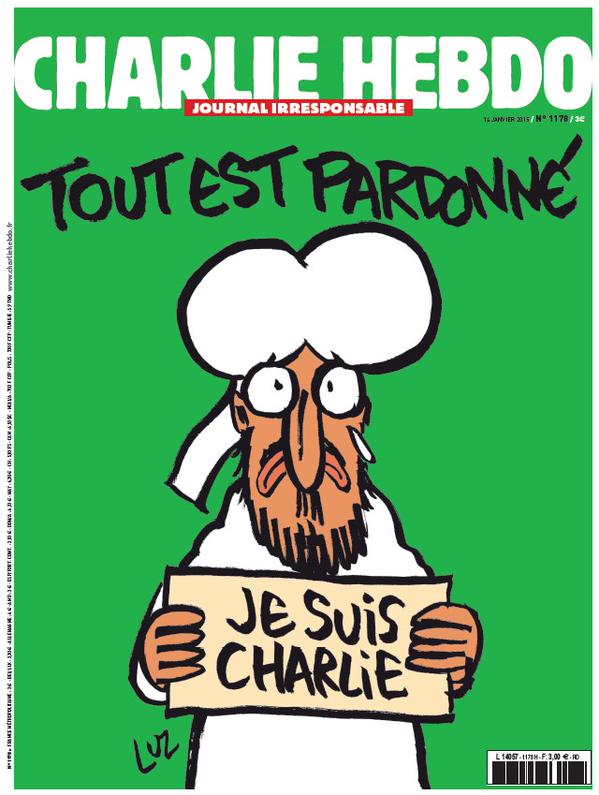 Who shows the cover » « On Newsnight