And if this is what my inbox looks like for merely writing about Sarkeesian, I can only imagine what her inbox looks like. I suspect she gets threats like these all the time; the reason she called the police about several of the threats she got this week is that the threateners posted her personal information as well.

But, according to some observers, it’s your own fault, and her own fault. You should both shut up about them, because. 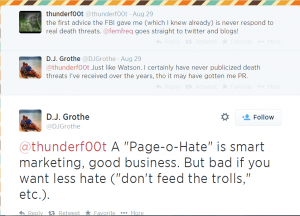 thunderf00t ‏@thunderf00t Aug 29
the first advice the FBI gave me (which I knew already) is never respond to real death threats. @femfreq goes straight to twitter and blogs!

D.J. Grothe ‏@DJGrothe Aug 29
@thunderf00t Just like Watson. I certainly have never publicized death threats I’ve received over the years, tho it may have gotten me PR.

@thunderf00t A “Page-o-Hate” is smart marketing, good business. But bad if you want less hate (“don’t feed the trolls,” etc.).

That’s impressive, isn’t it? Phil Mason thinks Sarkeesian should keep her threats a secret – and he insinuates that they’re not “real.”

That’s an interesting idea, isn’t it. No threats are “real” until they’re carried out. But guess what – nobody knows ahead of time which ones are going to be carried out and which ones aren’t. It’s really not up to random onlookers to say “oh that’s not a real threat” about threats that are sent to other people.

But Grothe’s contribution is even more disgusting, if only because Phil Mason, fortunately, is not the head of a big skeptics’ organization, while Grothe is. It’s not becoming for Grothe to belittle threats sent to Rebecca Watson. It’s even less becoming for him to say she does it as a marketing ploy.

But hey, maybe the threats are real. Or maybe not. Who knows, who knows.

thunderf00t ‏@thunderf00t Aug 29
@DJGrothe IF they were credible threats I would have told no one but FBI. Else u just undermine any possible investigation. I think its PR!

D.J. Grothe ‏@DJGrothe Aug 29
@thunderf00t Maybe so, who knows. With things like that, I say just err on the side of caution: report to authorities, full stop.

Guest post: Percept and its related concepts » « The side-taking hypothesis